Cover version of the month #26 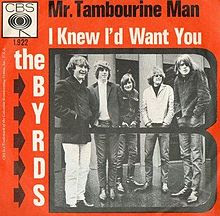 This is how I was introduced to the legendary Bob Dylan song. I recorded Teenage Fanclub live from Reading off the radio back in 1992. I was immediately hooked on the chiming guitars and flowing lyrics and the imagery of the song, the title too!

The Fanclub version was pretty true to the 2-minutes of pure guitar pop genius that The Byrds produced in homage to Dylan back in April 1965, only a month after Dylan had released his classic Bringing It All Back Home LP. The jingle-jangle mentioned in Dylan's chorus is replicated by beautiful 12-string Rickenbacker in the Byrd's version. The Byrd's manager had acquired an acetate of Dylan's original recording of the song, ear-marked for Another Side Of Bob Dylan, but the author decided the song was special and he hadn't captured it correctly, so he held it back for his next LP, re-recording it in January 1965. Ironically the month The Byrds recorded their version!

One of Dylan's many masterpieces, Mr Tambourine Man is a flowing psychedelic poem that lasts 5-minutes and 27 seconds, during which time Dylan barely pauses for breath (either singing or playing harmonica) and a guitarist called Bruce Langhorne plays some exquisite lead guitar.

The Byrds cut out most of the verses and in 2 and a half minutes they produce something utterly compelling and vital. The harmonies are glorious, the guitar riff is one that must surely have made kids pick up a guitar. Roger McGuinn's lead vocals are sublime, suiting the dreamy and surreal lyrics penned by Dylan.

Dylan played around with Mr Tambourine Man a lot, producing a remarkable version on his Live At The Budokan album which was one of the first Dylan albums I bought. Listen to the flute and the incredible organ solo - what a band! You can listen to this version below along with the original, the glorious Byrds cover and also one by Stevie Wonder.