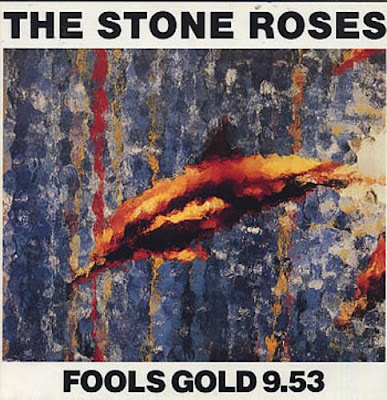 Fools Gold was the sound of Stone Roses at their peak, almost 10-minutes of funk groove via bass, beats, wah-wah guitar, samples and the coolest person in the world at the time on whispered vocals about friends searching for gold and ready to steal it off each other.... oh and the Marquis de Sade.

This inspirational tune came beautifully presented in artwork by guitarist John Squire entitled Double Dorsal Doppleganger - everything about this release was perfect.

Although it nearly wasn't; What The World Is Waiting For, a supreme slice of Roses guitar pop was originally intended to be the single, it was then changed to a double-a-side before then to all intents and purposes (and on rerelease) being relegated to the b-side.

The Roses released their legendary eponymous debut album in the spring of 1989, perfect timing for the second summer of love. Prior to this, there was a string of incredible guitar pop singles; Sally Cinnamon, Elephant Stone, Made Of Stone, She Bangs The Drums and Adored with all the glorious b-sides that came with them like Mersey Paradise, Standing Here, Where Angels Play and Going Down - but nothing, not even the album closer I Am The Resurrection, hinted where the Roses were going to go next.

They went off on one, sampling the beat from Bobby Byrd's - Hot Pants (bonus beats) with the bass line from Young MC's Know How, which itself was loosely based around guitar from Isaace Hayes Theme From Shaft.


The bass line is inspired by Young M.C's Know How
which was a tune we were really vibing off at the time
Mani 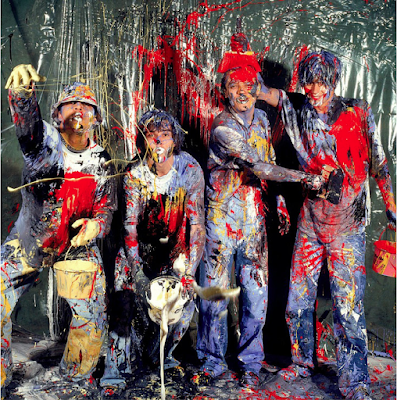 Fools Gold was recorded over the summer of 1989 and released in November of that year. If the Roses album had been the soundtrack to pre and post club parties, Fools Gold became the sound of the party - the real indie dance crossover - if there really is such a thing, the Roses would pour scorn on such statements, they simply made the best music they could.

The beat and bass groove are in from the start, it's fresh, it's funky, it sounds like nothing 4 white boys from Manchester should be creating. But then things were changing dramatically in 1989, particularly in Manchester, a city embracing ecstasy and all kinds of music from Detroit to Ibiza - people wanted to dance and expand their horizons - international, continental.

Brown doesn't take long to come in the gold roads sure a long road, winds on through the hill for fifteen days

Things move up a notch for the I'm standing alone ... section and all the time the beat and bass keep grooving while Squire coaxes majestic sounds from his guitar.

By the time Brown whispers his last Foo-oo-oo-ools Gold we still have over 4-minutes left of this incredible tune and we are treated to the magical delight of Reni, Mani and Squire vibing and riffing off each other. They sound in their element. The sounds Squire generates from his guitar sound other worldly, the best and most original guitar sounds from someone in Manchester since Johnny Marr created How Soon Is Now?

The Roses were a band of their time, but so good that they have stood the test of time. Good songs always do, but it was their look, their hair, clothes, style, appearance and attitude that combined with the songs, artwork and dance culture to elevate them way beyond other bands. 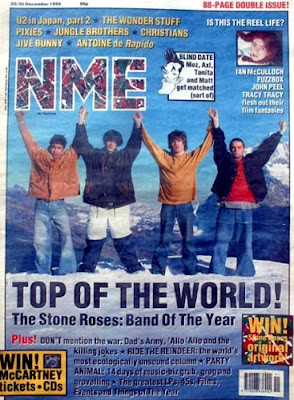 Their Top of the Pops appearance where they mime to Fools Gold was a landmark, with fellow Mancunians Happy Mondays playing Hallelujah on the same show - the times they were a changing.

Brown looks immaculate, his hair is super cool, swagger and confidence apparent and he looks like the coolest person in the world. Mani looks like he is partying on stage, swinging his Jackson Pollock-ed bass, flares on and lost in the music, Squire looks like a guitar god with a Beatles mop top and Reni acts all cool and semi interested in miming.

I can't help but think what if? What if they could have recorded an album of groove based trippy material? Something's Burning was another beauty and although Ian Brown has admitted he was never happy with One Love, you think of the album that they could have been working towards. Instead they became embroiled in legal disputes over management and label contracts, moved to different parts of the country and all started taking different drugs.


Decades down the line, if anyone is researching music in 1989 and wants to see the coolest band in the world at that time, I hope they find this film.

Fast forward to Heaton Park in 2012, the Roses huge homecoming shows. I'm there on the Sunday evening, lost in the music and an atmosphere so off the scale that some Manc scallies attempted to bottle it and sell on eBay!

Fools Gold is stretched to nearly 13-minutes; kicking off with a funky jam that I first heard when I saw them in Amsterdam and wondered it if was a new tune, but then the bass riff and beats kick in and Squire matches Mani. The incredible musical trio of Squire, Mani and Reni completely own this extended live version - from 6-minutes on they take the crowd on a psychedelic funk trip like no other, Brown comes back in with one final vocal, before they go off on one.

There is a breakdown to bass and drums before Squire starts to shred his guitar Hendrix style, his rhythm section is so tight that he has time to fiddle with effects, then tease and show off by dropping in riffs like Daytripper by The Beatles, a dash of Zeppelin and even add in Driving South from the Second Coming. It's outrageous, it is the Stone Roses, it is the sound of a band at their peak.....even now.