Static Union are a very young band making a bit of noise around Glasgow just now; stemming from a buzz around live shows, demos and their debut single Turn Out The Lights.

They launched the single with a show at a packed out Audio in Glasgow. I couldn't make it by my friend Alan was raving about it afterwards so I asked him to write a guest blog. It sounds like a belter and I hope to see the band play in the near future.

Static Union are Glasgow's next bright thing and making waves on a busy Friday night in the city. When a group of friends turn the corner to walk down Midland Street to see them at Audio, my initial thought is there's been an accident on the street as a crowd gathers the now derelict entrance to The Arches. It transpires the throng are waiting to get into the tight confines of Audio with the four members of the band about to take the stage in a few minutes. I previously saw this band supporting Holy Esque in December 2015 but clearly things are progressing in terms of interest in the band.

The band played a tight, melodic set at the St Luke's support gig over a year ago but the performance in Audio exhibited a maturity in both their stage craft and song-writing which has been honed through a busy year of gigging. 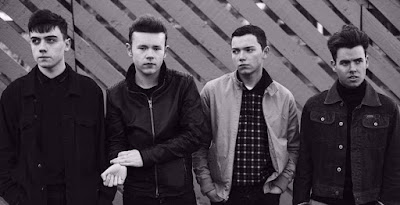 The gig tonight is to launch their debut single Turn Out The Lights and the band hit the stage to the excitable sell-out crowd and pull no punches with the new single as the set opener. The band cite their influences as The National, Arcade Fire, Radiohead, Joy Division and early U2. Their debut is a statement of intent with its incessant guitar hook somehow echoing Bodysnatchers from In Rainbows and bouncing off the vibe and clever time changes of early Artic Monkeys.

Frontman Sean McGarvey is clearly enjoying himself from the start as he reaches out to the crowd who are clearly well up for it tonight. Liam Adams is one half of a super-tight rhythm section, reminding me of Graham Coxon in the early Blur years (if Coxon had played the bass that its!) and with drummer Cameron Angus, the clever tempo change at the end of each chorus as heads bobbing involuntarily around the venue.

Lead guitarist James Harker bosses the other side of the stage, either throwing off funky guitar lines in the brilliant Accelerator or (in my own favourite song of the evening) showing his versatility in playing synth in the second song Last Of Our Kind. This song didn't feature at the St Luke's gig and is the first real sign to me of the evolving maturity of a still young band. If you love Joy Division/early New Order or remember the excitement when the Stone Roses fused electronica seamlessly with proper guitar pop, then you will dig The Last Of Our Kind. as they then launch into the driving groove of Accelerator to complete a very strong opening trio of songs, our wee gang at the back of the hall found ourselves doing that looking at each other, grinning and nodding things...we were thinking lets enjoy this moment as they could/should be massive. 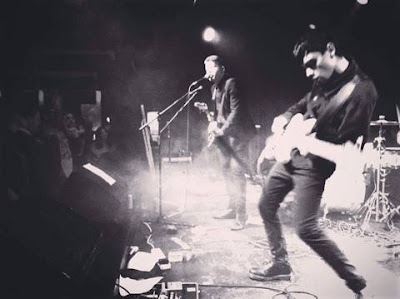 Sean clearly enjoys being stage centre and when he grasps the mic stand to sing the intro of Distant Memory, a new dimension again not previously on show is revealed. He is clearly a proficient guitarist but as he wrings the mic, the guitar is sidelined and the drama of the song shines through. The influence of Matt Berlinger's stage craft in The National strikes me as he sings and I'd personally encourage him to do it more.

I allow myself a wry smile as the band break into You Wish. The poppies elements of some of the bands sound is replaced by a riff that recalls Robby Krueger at his best. It seems very apt to have the ghost of The Doors evoked when America is in the midst of a crisis not seen since Jim Morrison taunted the Nixon White House and the FBI in 1969. The band coast through their impeccable set and after closing with Losing Yourself, they give into the crowd's demands and return to the stage for a second joyous rendition other debut single.  Watch a live video HERE

A tremendous song and a great description on what sounded like a pretty special gig.
Will keep an eye out for them