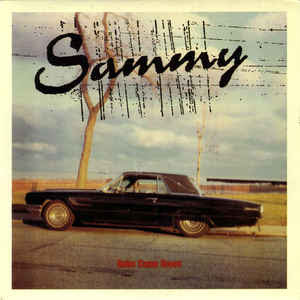 There's not a British artist in sight for this months additions to the Never Ending Mixtape.

A lot of the songs on the mixtape relate to my teenage years when I was discovering all kinds of music - new and old. I remember buying a 7-inch in the old Missing Records in Glasgow cause I liked the cover of a beat up old car and the song title Babe Come Down. I've loved this song for over half my life but really don't know much about the band Sammy at all. Slacker indie guitar that just sounded glorious to a young teenager living in a small town 20-miles from Glasgow that might just as well have been 1 million miles.

Sammy split up way in 1996, way before the era of the internet. So there's not much about them online at all. Just a few references to their debut album and Babe Come Down from other people who happened to discover them.

It was such a different time back then. For independent bands from America the thought and fact that teenage kids in Glasgow were somehow picking up one of their limited edition 7-inch singles must have been slightly mind blowing.

I never got round to buying the Sammy album, or maybe it never for around to arriving in Glasgow. But it is now on Spotify and their slacker style indie guitar music is filling me with teen spirit.

And on that note; I've added in Sappy by Nirvana, a song my friend Craig and I discovered on a bootleg Nirvana CD over 20-years ago following Kurt's sad passing. He would have been 50 today,

Check the Never Ending Playlist from the start here. All of this months songs are listed below.

Here Comes Your Man - Pixies
Like Lou Reed's stuff, it is the copier stuff of Pixies that I like. Some of my friends are Pixies daft (as is half of Glasgow) - this is by far my favourite song of theirs.

Start Choppin' - Dinosaur Jr
Ah J Mascis playing guitar - what a sound. I had some guitar lessons when I was 18 and I asked if I could be taught this riff!

Soul and Fire - Sebadoh
Lou Barlow aches over the sound of chiming guitars. One of the singles I fell for so much that I own on multiple formats.

If I Can't Change Your Mind - Sugar
Bob Mould knew that his Sugar project was a good one and that Copper Blue would open doors. It certainly opened mine. This is power guitar pop perfection.

Cannonball - The Breeders
See above for crazy and fun. The groove and flow, rises and falls in this song, the hook.....ooohh so good that 2ManyDj's dropped it into their sets.

Web in Front - Archers of Loaf
More American guitar indie brilliance. The mid-90's was an amazing time for discovering music from across the ocean.

Sappy - Nirvana
Ah yeah - what could have been. The demo's that Kurt left behind and the amazing Unplugged performance....what would Nirvana have done next.....