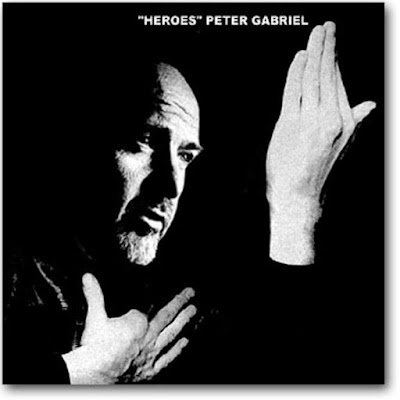 Cover version of the month #22
Heroes by Peter Gabriel

Gabriel recorded Heroes for his 2010 album Scratch My Back. This surprised me, it fits so perfectly with the scene in Stranger Things that I thought Gabriel must have had the script and recorded it specifically to fit. The arrangement is by a guy called John Metcalfe and his work with Gabriel on this track is more than enough to ensure I will be listening to the full album.

The tense, sparse and atmospheric opening leads to Gabriel singing tenderly but with real purpose. Strings and long held notes build then tension and feeling surrounding this exceptional version.


Without any of the drive of guitar and drums...it builds an enormous tension that bursts open.

Gabriel is immersed in the song and at 2-minutes 40 seconds the tension bursts in spectacular fashion with Gabriel's voice rising in time with the strings. It is truly mesmerising.


I, I can remember
Standing, by the wall
And the guns shot above our heads
And we kissed as though nothing could fall

The Scratch My Back album was conceived with the idea that Gabriel would cover an artists song in return for them covering one of his. The return album And I'll Scratch Yours was released in 2013.


If you're going to reinterpret something, then really do something. Nail your colours to the mast and say. 'this is different and it isn't everybody's cup of tea.'

Heroes is a Bowie masterpiece, the inspiration for the song, the lyrics, vocal, riff, feel and soul of the song is utter perfection. How the f**k do you even begin to consider covering it? Check this live version from Berlin in 2002 with Bowie commenting at the end I felt that.


Well Gabriel's cover is absolutely justified. Mat Snow wrote of Heroes in his Mojo review for the album that the songs underlying despair rises to the top.

Enjoy this remarkable interpretation of an incredible song. I've included the studio version and a live version in Verona with an orchestra - goosebumps!