The Christmas Effect at Mono

In 2015 my sister organised 2 very enjoyable and successful charity nights to raise funds for Scottish Women's Aid. She managed to get a load of bands and artists to play shows under the banner The Girl Effect at Summerhall in Edinburgh in May and, because that one was so successful, one in Mono in Glasgow in November. TeenCanteen and friends including Eugene Kelly, Kathryn Joseph, Duglas T Stewart, Norman Blake, Machines in Heaven, Broken Records and The Spook School came together to play covers of girl groups and raised well over £6,000 for the charity, as well as a great deal of awareness.

Carla always intended to do another, but with the release of 2 albums in 2016 through TeenCanteen and Ette, she's been kind of busy!

Not to worry, upon deciding to do something a little different - this time it would be Christmas covers and be known as The Christmas Effect - a stellar line-up was swiftly put together, with a little help from TeenCanteen label mates at Last Night From Glasgow (Mark W Georgsson, Emme Woods, BooHooHoo and Sister John) and Ette label mates from Olive Grove Records; Randolph's Leap and Mt.Doubt, Broken Records, the Cairn String Quartet and Honey and the Herbs.

To be even more ambitious, the concert was recorded and will be released as a digital album! Possibly in time for Christmas.

I must say a huge thank you to all the artists, Ian at LNfG, all at Mono, Ronan and Colin from La Chunky and everyone who came. It was a brilliant night, really friendly atmosphere and great fun. 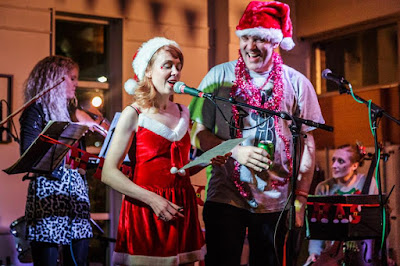 Here is, from memory, roughly what happened;

Things started early with doors opening at 6.45pm and it was fantastic that so many people were down in time to see the Cairn String Quartet open proceedings with classy renditions of It's Beginning To Look A Lot Like Christmas followed by seasonal number 1 for the Spice Girls - 2 Become 1. Their swooping and soaring strings gave a real sense of occasion to the whole night. 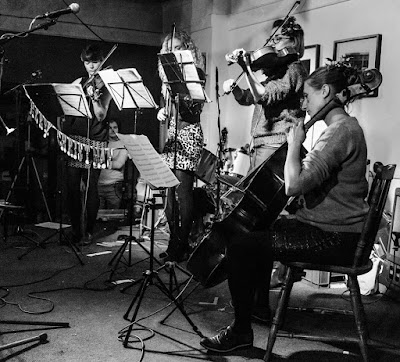 Next up was my first live introduction to Sister John, new signings to Last Night From Glasgow. They played 2 stunning covers of songs by The Band (Christmas Must Be Tonight) and The Rolling Stones (Winter). Their harmonies were stunning and lead singer Amanda McKeown really went to town, sounding sensational, particularly on The Stones song. I really am looking forward to seeing them live in their own right. 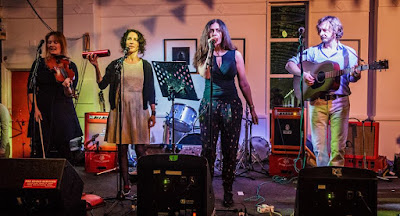 Leo and Annie from Mt Doubt took on the classic Joy To The World by Elvis Isaac Watts and The Christmas Song by The Raveonettes. Both of them sounded incredible, Leo was deep and has a huge range, Annie was more delicate and soothing, a great combination. 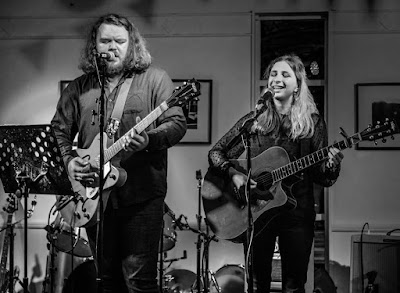 Mark W Georgsson was next, opening with a brave, bold and truly beautiful cover of an old German hymn How A Rose E-er Blooming. It was just Mark and his acoustic, you could have heard a pin drop, it was lovely. Mark told how he had heard it on a Sufjan Stevens Christmas album. Mark was then joined by a variety of friends including Emme Woods on double bass and members of The Bar Dogs for a brilliant country rock run through of Just Like Christmas by Low. 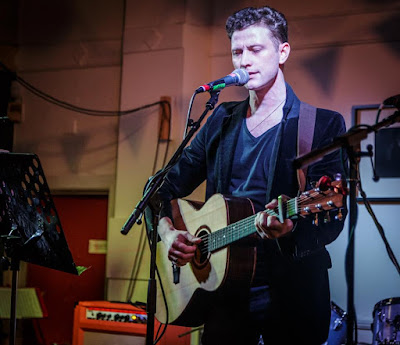 Emme Woods was up next and she was in super fun form; beginning by purring her way through Santa Baby and then playing a unique version of The Doors Riders On The Storm but changing the lyrics to a Christmas theme, so it was riders on the sleigh for starters. It was great fun and everyone responded well to Emme's humour and style. 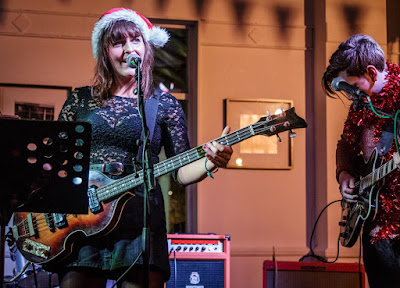 BooHooHoo came on and made everyone smile with a take on Aled Jones Walking In The Air, before creating the first dance of the night and a real sing song to Christmas Time (Don't Let The Bells End) by The Darkness complete with outrageous synth and guitar solos. 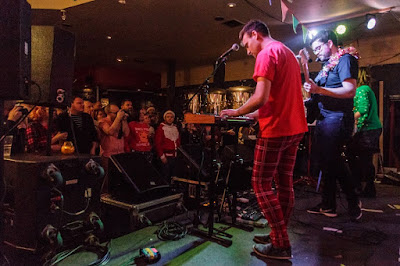 Randolph's Leap bounded on to the stage complete with horns and immediately at the crowd eating out of their hand, banishing any nerves about following a Darkness cover! Adam's voice was pure and true on the Everly Brothers Christmas Eve Can Kill You. Between song banter hilariously referred to an old Christmas single by Ron Atkinson and had a few people checking google to see if this was indeed true. It was/is! There was then a beautiful song by Eels Everything's Gonna Be Cool This Christmas. 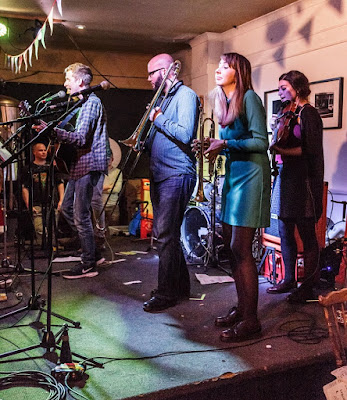 If BooHooHoo had the first dance, Ette (following on from having their debut album in the top 5 albums of the year by Bandcamp) caused a few jigs with their cover of The Waitresses Christmas Wrapping, complete with Carla playing sax for the first time in 13-years! They followed that with a romp through Wizzard's I Wish It Could Be Christmas Every Day which was sensational. Chloe and Debs harmonies were absolutely gorgeous and they ended by somehow throwing in lines from Feed The World. Joe Kane on guitar was in his element in a Santa jumper, throwing in a few Pete Townsend kicks and windmills. 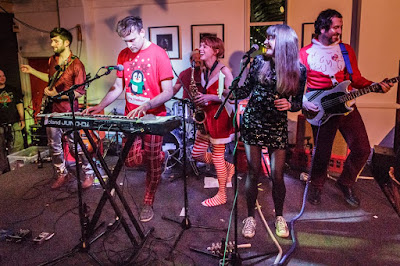 Things were hotting up, it was turning into a game of top trumps. How to follow that? Step forward Honey and the Herbs who performed an amazing acapella version of Chestnuts Roasting On An Open Fire. Their harmonies were exquisite and they looked splendid in their Christmas jumpers.The audience lapped it up. The quartet donned their instruments and continued to wow the crowd with Last Christmas by Wham. It may well have been the performance of the night. They nailed it, complete with whisper, and it really highlighted what a brilliant song it is. 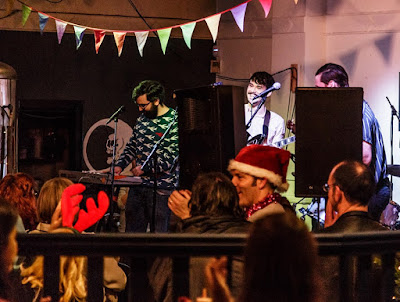 Honey and the Herbs - picture by Brendan Waters

Broken Records came all the way through from Edinburgh and they played an absolute blinder. The game of top trumps was well and truly on, so Broken Records played Driving Home For Christmas by Chris Rea. The 6-piece looked and sounded brilliant. For me, they are a band that look like a real gang on stage, they know how to play. Singer Jamie runs an annual Christmas Song club in Edinburgh and as they write one every year, they decided to play their favourite. Called My Beer Drunk Soul Is Sadder Than All The Dead Christmas Tree's In The World, it was another of my favourites from the night, a storming song that was Springsteen-esque in size and delivery. The passion conjured up on stage was admirable as there was no sound check and each band was only allowed 2 songs.

So yeah top trumps? Well TeenCanteen had a helping hand in the shape of the Cairn String Quartet, Lizzie from BooHooHoo and Eugene Kelly from The Vaselines joining them on stage! A huge thanks to everyone led to Mariah Carey's I Don't Want A Lot For Christmas which sparked a lot of dancing and singing a-long. They then trumped themselves when Carla and Eugene duetted on The Pogue's Fairytale Of New York, it was the perfect song to end the live performances. 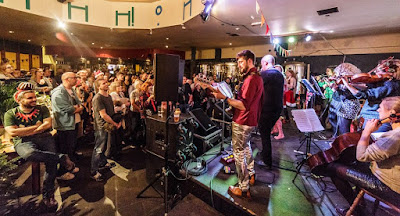 Ticket sales, a raffle and the Ebay sale of the last ever gatefold vinyl copy of TeenCanteen's debut album (which raised a sensational £260 - Tigermilk II?) ensure that the final total raised is looking like £3,100 to be split between Scottish Women's Aid and the Scottish Refugee Council.

Thanks to all for a very memorable night. Same time next year?

We'll hopefully get the live album out soon but in the meantime here is a playlist with most of the songs.