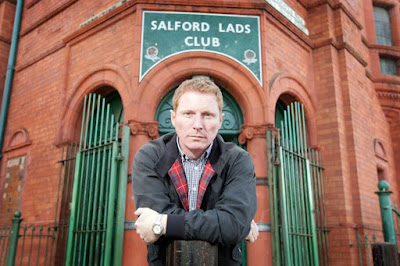 In sixth year at school (1993 if my Maths is correct) I was the editor of the Carluke High School yearbook. I wanted to be a journalist....

I assigned various pages and topics to other wannabe journalists but kept a double page for music to myself. So we had the most popular tracks on the common room tape player, a poll for favourite bands and that kind of thing. I really need to see if it is up in my Mum's loft.

However, I don't need to find my copy to know that the Inspiral Carpets featured heavily alongside Nirvana, Metallica, The Beatles, James, Stone Roses, Charlatans and ..... the Frank And Walters! After All was a huge tune and the Frank's zany sense of humour and imagination with songs like Happy Busman and Fashion Crisis Hits New York won fans in Carluke. In fact, I remember a crowd of us bunked off school to go and see them play an acoustic show at the old Tower Records in Glasgow.

Anyway, back to the Carpets. One of my friends Des was largely responsible for a crowd of people in our year falling for the Carpets. I wish I had kept some of the compilation tapes that regularly floated about the 5th and 6th year common rooms around that time. Des had a keyboard and all of the early Carpets releases on vinyl. I remember being round at his house one night to play and discuss music and he told me he was writing to the band and one of them had phoned him. Des eventually formed a band with his keyboard/organ sound pushed to the front like his idol Clint Boon. 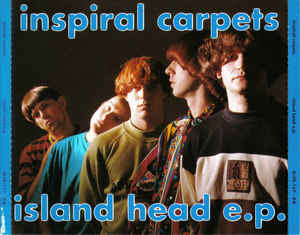 The Carpets burst out of Manchester alongside bands like the Roses and the Mondays. Songs like She Comes In The Fall and This Is How It Feels were absolutely massive. Two World's Collide is probably my favourite Carpets tune, that, Bitches Brew and Dragging Me Down off the Revenge Of The Goldfish album plus the aforementioned classics.

Saturn 5 was another huge single for the Carpets. They were prolific; releasing albums in 1990 (Life), 1991 (The Beast Inside), 1992 (Revenge Of The Goldfish) and 1994 (Devil Hopping). Throw in some non-album EP's and a string of singles - the band were always around during my teenage years. Really prolific with their output and touring. Quality and quantity. The Carpets had a real honesty about them, they were different - a little more garage, raw and in Clint Boon they had someone with real personality. All of that (and more) that translated to gain a huge fanbase around the country.

As the years went by, old school friends Des, Ian (Fishy) and Stevie would continue to get guest lists for Carpets shows in Glasgow and beyond. Through Facebook I would see pictures of old friends up on stage at soundcheck to play Clint's organ and learn of the Carpets helping with unique signed presents for special occasions. They are that kind of band, good people.

So, I've been reminiscing. The reason for this is due to the very sad death last month of Carpets drummer Craig Gill at the age of only 44. Tragically young. Craig joined the band at the age of just 14.

To celebrate Craig's life and to help demonstrate the love for the Carpets to Craig's kids, fans of the band have started a campaign to get Saturn 5 to number 1 at Christmas. It would be lovely.....and it might just happen. Carpets fans and the city of Manchester are right behind it and in the first 24-hours Two Worlds Collide was only 800 behind top spot. It is a marathon, not a sprint though, fingers crossed for the Carpets fans who have poured so much energy into this campaign.

I've just downloaded it from iTunes for only 99p and do you know what - it made me feel good inside. 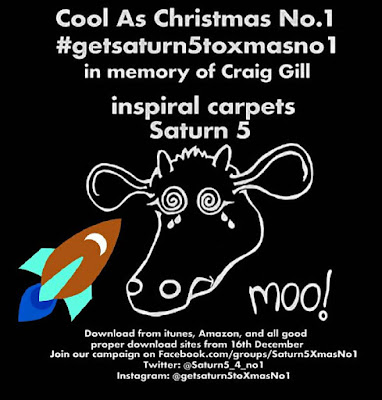 Labels: Carluke, Christmas Number 1, Clint Boon, Inspiral Carpets, No 1, Saturn 5, She Comes In The Fall, This Is How It Feels, Two Worlds Collide