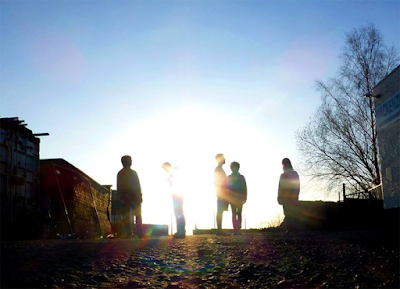 Being in a DIY band can be a whole heap of fun; hanging with your friends, creating music, playing, making new friends and fans, a festival here, a radio session there.....

There also incredible challenges and tough decisions to make - is it worthwhile travelling to play a show in Inverness, losing money and playing to 20 people? Can we all get time off to go on tour? Can we afford to go on tour? How do we organise a tour?!

Chris Cusack is the booker for independent venue Bar BLOC in Glasgow, helping bands from all over come to play in Glasgow. Chris is also in Outblinker; a fiercely independent band that have the ability and vision to create cinematic psychedelic grooves that take the listener on a journey.

The band are about to head off on a European tour to promote their forthcoming The Remains Of Walter Peck EP. In the meantime they have released a cover version of the Neu! song Halogallo.

The cover version is available to download at a price you name. The proceeds will go to Marie Curie under the guise of the Human Is Not Alone project - set up in memory of Robbie Cooper.

Robbie is someone I was introduced to by his great friend Chris. His intelligence, wit, charm, humour and views on life, death and the universe won me over in no time. Sadly Robbie passed away after a brave fight against a very rare and aggressive form of cancer. It is safe to say that Robbie is someone I will never forget.

You can view the video for Halogallo below.

I caught up with Chris to find out how the hell your organise a DIY European tour. Tour dates at the bottom. 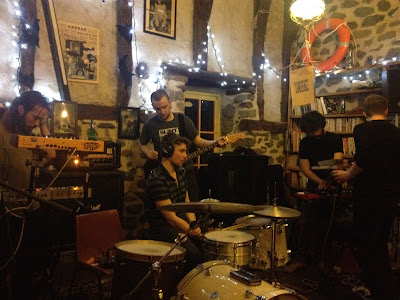 1. You have an extensive European tour booked. How hard is it to organise something like this as a DIY band? Who helped? How long did it take? (all one massive question really)

Hi Murray. Yeah this will be our longest European trip, even factoring in some of mine and David's previous act Hey Enemy's bigger outings. It is of course very time consuming to organise these things and can often feel like a full time job in itself when you're in the eye of the storm. We started planning this together around February then it began to take shape in earnest in mid-August. I started the process and Luigi joined when things got serious. Meanwhile the other guys in the band handled peripheral things like bank accounts, insurance and boring stuff I couldn't face.

2. What do you enjoy about ‘being on the road’ the most?

Being on the road in Europe is, for me, without a doubt the highlight of being involved in music. Over 15 years I (and we) have forged some very strong friendships in other countries and it is really akin to visiting family. The European underground has a strong sense of community and it's a lovely feeling to draw up outside a bar 1000 miles away and have familiar faces walk out to give you a hug. 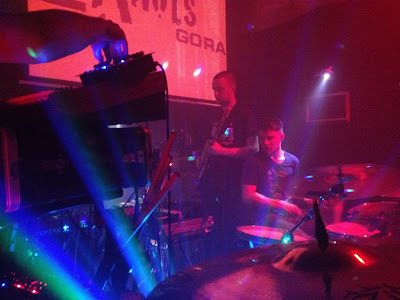 I'm also lucky enough to be in a group of good people with a real nice internal dynamic. It's a pleasure to spend time with the guys in Outblinker and that makes the entire process infinitely easier. I am well aware that this is frequently not how it plays out in bands. Stuck in a van for hours. Cabin fever. Personal space. Many a musical project has met it's match on the road and torn itself apart on returning. I've watched it happen first hand.

3. What are the challenges?

As I say, one challenge is being considerate and establishing good understanding between the members. Making sure everyone plays their part and respects the others. That can take time and frequently needs to be learned the hard way, but all of the best touring acts have ultimately had to forge a viable dynamic through communication and understanding to have any chance of lasting when crammed into each other's company for weeks at a time. 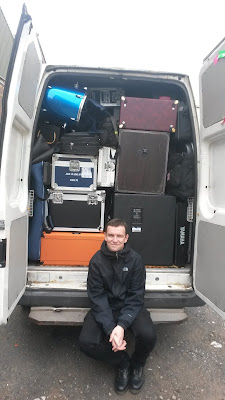 Outblinker's tour van - any room for the band?!

On a practical level, as regards booking, timing is key. it pays to get your plans in place early (as I say, for us we began discussing a November tour in February, making sure everyone was happy and fully committed). However many DIY promoters often cannot commit to solid bookings until much closer to the tour date. So it pays to try get a basic routing or spine of shows in place securing anyone who is comfortable booking well ahead, then being sure to have everything ready to go (bios, riders, online resources) when the "sweet spot" come around. For DIY tours that is usually between 12 and 8 weeks before departure. Activity in that window is frantic as you build a coherent route and swap dates, juggle options etc.

There is usually a final burst of activity which involves trying to fill any conspicuous gaps afterwards. Most early stages of booking tours will result in one or two unplanned holes. Certainly days off are vital, but too many gaps and it takes a toll on the finances (not to mention making for long journeys and musical rust). So between 8 and 4 weeks there will usually be a bit of last-minute horse-trading to get the remaining gaps filled, perhaps by joining existing shows or asking a couple of the existing promoters to put the word out on your behalf.

After 4-weeks, it's really just getting your equipment ready, your transport nailed and anything else is covered. 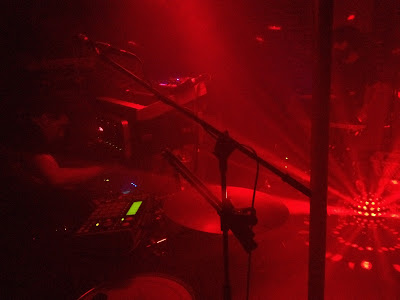 4. What advice would you give to other bands/artists looking to do something similar?

My advice would be engage with as many other DIY acts as frequently as possible. Unless you get very lucky or have powerful allies, these tours only really work by building up a network of contacts based on mutual respect and philosophy. So for example, helping put touring acts you like in touch with reliable local promoters, putting up posters, sharing online events within a scene you understand - basically acting as feet on the ground for bands looking to visit a foreign country - is an invaluable and greatly appreciated service.

Certainly touring bands will be all too familiar with cold-calling hundreds of venues and promoters when attempting to organise a tour but the response rate generally hovers between 10-20% if you are lucky. There is a much greater strike rate when you have someone who is knowledgeable about that specific territory putting you in touch with people more likely to be interested in your show. it saves the band/booker masses of time (and emotional energy) and ultimately creates a reciprocal sense of good will when time comes for you to visit their homeland.

By all means, when looking to build your touring network, speak to other bands in your area or genre who have  toured ina similar fashion and ask if they can share any good contact lists. At any one time there are generally a set of these lists being shared round the continent between bands on the various scenes. Each time being modified and augmented as new people share them and time passes.

5. Where are you looking forward to playing the most?

As much as it is nice to play fancy venues - our show in Barcelona with Zu is especially appealing - some of the best times I can remember touring were in the most unlikely of locations, such as Le Cave in Chadenet or Lakaxita in Irun. This time around, we are returning to Le Pakebot in Chadron. A tiny village in the hills of France. Last time we played people had driven for hours to get to the concert and we bothdined and slept in the same building as much of the crowd afterwards. It was a real community effort.

Also, at one point during the show, I looked out the window of the venue and saw a herd of cattle being herded down the main road past the venue, a few looking in at the noise. We were in the middle of nowhere. The place was packed and full of good vibes. That was pretty surreal and also pretty great.


6. What can people expect from your shows?

Our shows are certainly loud, but grounded in a lot of melody so I hope people can expect as much euphoria as catharsis. Whilst we have a number of songs carefully rehearsed, we also have a large amount of room for improvisation which means each concert is slightly different and in turn reflects it's environment. In a room that responds to heavier parts, we might take these large sections in that Sunn0))) direction. On a more electronic night, we might get a bit more Aphex Twin. In that way the crowd help dictate the show.
In real terms, the music is expansive, pretty trippy and psychedelic, with some cool lights, a love of smoke machines, and one big (hopefully) seamless performance.

7. All the proceeds from the single are going to charity. Can you tell us about this?

Yeah the new single - a cover of Hallogallo by Neu! -was intended to elp promote the tour a bit and is effectively dedicated to "Walter Peck", the deceased protagonist of our current EP ("The Remains of Walter Peck"). It's a typically sprawling space-voyage of a song, as illustrated by the video that is coming out to join it. We tried to stay reasonably faithful to the original version for the first half of the tune but then take it into our own back garden for it's conclusion. Make it something much more authentically "Outblinker".

The single will be "name your price" on Bandcamp and that money will go via the Human Is Not Alone project that was set up to fund the work of Marie Curie Cancer Care. Something close to our hearts and with subtle relevance to the subject matter that we will let remain a mystery. 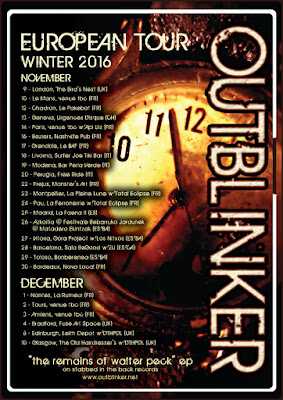