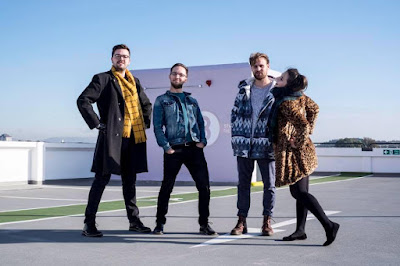 BooHooHoo were introduced to me by my sister Carla who described them as the best band in Scotland. High praise indeed!

When I saw them live - the name totally fitted. Richard Richardson, Reggie House, Liz Kiyoko and Ewan Laing combine to create synth grooves and an infectious energy. The band have well over an album of songs in their back pockets and if they can capture their live sound and feel on record then they will produce an exciting and exhilarating debut album that will get people dancing, singing and smiling.

Before we can think of the album, it is time to introduce the band via their EP released on Last Night From Glasgow. It's out at the start of December and BooHooHoo have a party planned at Nice n Sleazys on 30th November - it's SOLD OUT. You can watch a video for Mould Me at the end of this blog.

The EP (with the amazing title DebutHooHoo EP) is a delight - upbeat, fun, shouty, funky, poppy, electro goodness that generates a spring in your step and a grin across your face. It's being released on limited edition snap USB wristbands!!! There are 4 different colours for each member of the band. I'm going pink for Lizzy!

Keep reading for a quick chat about how the band formed and their musical tastes. 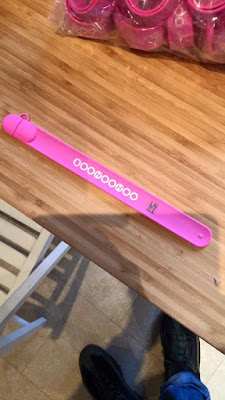 Where does everyone come from? How did you meet?
Richardson - I grew up in Erskine. I met Reggie in school. Skip forward quite a few years and we found Lizzie on Gumtree in the Musicians Wanted section. Ewan was a flatmate of a dear friend who just so happened to be sound AND a drummer!

Reggie and I used to write songs together at the back of higher English. We used to exchange CD's as homework for our soon to be formed band. After getting depressed of playing the same sort of bluesy rock and roll stuff every time we picked up guitars, we decided to channel our energy into synths and drum machines. As you do. We recorded with our producer pal Stephen Watkins and turned to Gumtree to find members.

What kind of music are you into?
We all have our individual tastes but as far as musical influences go for this band I'd say Talking Heads, Prince, Peter Gabriel, Devo, LCD Soundsystem, Chromeo, Hot Chip and Kate Bush.

So we sound like four 20 somethings meeting their Mum's record collection!