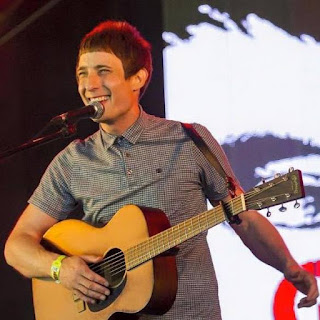 Gerry Cinnamon has been kicking around the Scottish music scene for a number of years. I first caught him live with his band The Cinnamons when my friends (also from Castlemilk) in Sonny Marvello suggested them for a support act away back in 2009.

Gerry shaked, shimmied and owned the stage in Stereo that night and then promptly went AWOL for a few days.  His personality, humour and love of music shone through then. It burns even brighter now.

Part of the reason for the fire burning brighter is the fact that so many people have fallen in love with him. His confidence is sky high. A lot of that stems from the incredible reaction to his song Hope Over Fear that he posted online shortly before the Scottish Independence referendum. Gerry went viral.

The reaction led to Gerry headlining rallies and been invited to play all over Scotland. With a growing catalogue of his own songs and a steady supply of cover versions thanks to considerable time spent hosting open mic nights - Gerry won hearts and minds with his political views, twinkle in his eye and his songs from the heart for the people. I look forward to his forthcoming album.

I couldn't make his show at the ABC but my friend Ryan (also from Catlemilk) kindly offered to write a guest blog review. 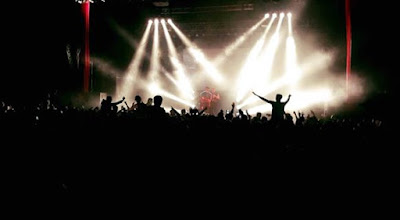 There’s a buzz in the air. From the bus stops of Castlemilk Drive and the back seats of every taxi leaving the scheme right up to the queue outside the O2 ABC that extends round the corner and up the hill.

I didn’t manage get a ticket when they went on sale. They sold out in less than a week, making him the first unsigned act to ever do so. I had to rely on my ever-reliable source for tickets, who managed to sort me out at the 11th hour. He has asked that he remain anonymous. Cheers John.

I first met Gerry 15 years ago at a music night in Castlemilk. He appeared quiet and shy, stood there in his AC Milan tracksuit watching the band that was sound checking. I’d heard he was a local boy who was writing songs and he was due to play a few of them on the night but he was nervous. “I haven’t brought my guitar”, he said. I offered him mine but he said, “Na, it’s ok.”  He didn’t play that night.

Fast-forward 15 years and it’s a far cry from the shy, introverted teenager, too timid to take the stage that night. I don’t know him personally but I’ve followed his career with interest since then, from the low-fi days of The Cinnamons to critical acclaim as a solo artist.

On stage now stands showman, able to melt your heart with a love song or smash you in the face with a chorus. There’s a rawness about his act and an honesty in his songs that comes from the heart. That’s why we’re all here.

We arrive at the venue in good time. Outside, a sea of people stand patiently; either waiting to get in or trying to punt a ticket for three times the face value.

Either way, the buzz has intensified. Some folk are chanting his name in the lobby or singing the odd chorus here and there. Following another successful appearance at T in the Park and winning Best Live Act at the Scottish Alternative Music Awards people know what they’re coming to see. 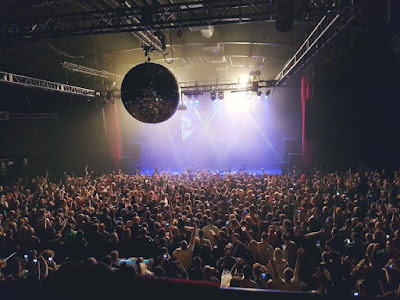 There’s a friendly atmosphere around the place; handshakes and hugs all round, sometimes the occasional nod. It’s like when you meet someone on holiday and you recognise their face and your mind is blown and instantly become their best fuckin’ pal, for the duration of the holiday at least, even though you walk past them in the street every other day. It was that kind of vibe.

Over 1400 are people packed into the main room of the O2 ABC. It’s a good night to be a housebreaker in Castlemilk as half of its population is in Sauchihall St. As usual, the front is crammed with people eager to get as close as they can to the madness. The lights dim and so starts the chanting: “GERRY CINNAMON, CINNAMON, GERRY CINNAMON. NA NANANA NA NA NA NA NA”

As the intro video plays on a huge screen above the stage, a silhouetted Gerry walks on stage to a wall of noise from the crowd. There’s a pause as he appears to take it all in. Then he gets down to business. From the opening beats of Gerry’s Lullaby it was clear that everyone in the room was strapped in and ready for the ride.  Here we…

What follows is a blistering 80-minute set. The sound generated by one man, a guitar, a loop pedal and a harmonica is incredible. The crowd, lost in the moment, passionately sings back every word of every song. And they mean it too. Every syllable.

It’s hard to believe that his album hasn’t even been finished yet.

The opening guitar riff of Sometimes, a favourite of those who followed The Cinnamons, is belted out note by note by the crowd. A life long friend of mine leans into me and says, “This song just reminds me of my weekends.” Yes, Barry, you and 1,399 other people mate. From here on in it’s any man (and woman) for themselves.

As the night went on the crowd grew with every track.  The number of drinks being thrown and people on shoulders began to multiply, as did the decibels. 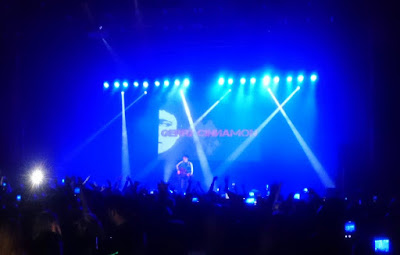 Dead Man’s Shoes and War Song Soldier caused further chaos. The former a single released by The Cinnamons, the latter a harmonica driven folk song that Dylan would have written had he grown up in a scheme in Glasgow.

Gerry is joined on stage by Calum Frame for a rendition of Fickle McSelfish, a personal favourite of mine. Lyrically beautiful and peppered with self-deprecation, every man can relate to it. And if you can’t, you’re a fuckin’ liar.

“Then she grabbed on my hair, bit on my lip ‘til in bled.
Fuck the notion of living without you, I’d rather be dead.”

New track She’s A Belter is a love song, so warmly received it sounds like a new fan’s favorite already, even though it’s never been recorded. Its Irish folk song melody and Glaswegian lyrics makes it instantly lovable.

“She is a gangster, with a 100 mile stare. When she walks her feet don’t touch the flair.”

Diamonds In The Mud slows things down. It has a sound of nostalgia that lifts halfway through. It feels like storytelling at it’s most personal.

“Schools, run by fools. Leave to get education.”

The encore closes with a cover that seems close to Gerry’s heart, Caledonia. One last sing-along before the curtain falls and the crowd leave knowing they’ve seen something special. One of those nights you’ll be saying in years to come, “I was there.”

Gerry discredits music industry ‘vampires’ and encourages people to “Build their own bonfires.” Some might say that Gerry’s built his own bonfire.

It’s more of an active volcano and it’s ready to erupt.

So, what’s next for Gerry Cinnamon? With the album on it’s way and the small matter of some high profile support slots I can’t see this train coming off the tracks. The people are behind him and they want more.

Who knows? All I know is, based on what we’ve witnessed tonight, whatever the future holds, it’ll be fuckin’ chaos.