Scared to Get Happy; a story of indie-pop 1980- 1989 was my early Christmas present to myself. 5 cd's of guitar pop music, a mammoth 134 songs, many of which I hadn't heard before.

I don't quite have the time to review every song on this brilliant boxset, however I decided to settle down with a nice glass of red to dig out some of the highlights. 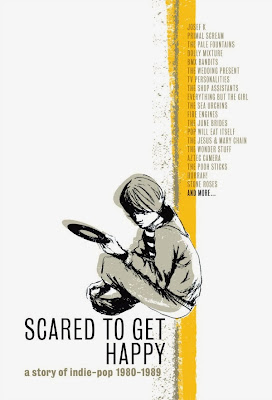 Disc 1
Scared To Get Happy features predominantly male singers, so it's probably not surprising that 'It's A Fine Day' by Jane, an acappella female vocal, stuck out like a sore thumb. The song was written by the poet Edward Barton and this version was recorded by his girlfriend Jane Lancaster. It was sent to John Peel who played it and it was then released on Cherry Red. The song later became a huge hit for Opus III.


There are many stand outs, I really enjoyed Art Objects 'Showing Off To Impress Girls', top marks for the title alone. 'I Think I Need Help' by The Farmer's Boys also stood out and 'Lions In My Own Garden (Exit Someone)' by Prefab Sprout is tremendous, I can imagine a young Stuart Murdoch listening to this.

The whole boxset offers music that retains a sense of innocence; the music is raw (sometimes incredibly so), not over-produced and soulful. All the better for it. I guess the height of ambition for many of the artists featured was to simply get a record out and played on John Peel.


Disc 2
'Oblivious' by Aztec Camera is one of only maybe a dozen songs I knew before buying the box set. It is stunning, a young Roddy Frame striving for pop perfection. It stands out a mile, so melodic and well structured.


The tracklisting on the boxset is roughly in chronological order and if I didn't know many band names on disc 1, then I recognised the names of Del Amitri, Lloyd Cole and The Commotions, Microdisney, The Jazz Butcher, Jasmine Minks, June Brides Revolving Paint Dream, James, Jesus and Marychain and The Loft on here. The demo version of JAMC's 'Just Like Honey' is stunning.

One band I hadn't heard of is In Embrace with their song 'This Brilliant Evening'. I was hooked on first listen. It sounds quite polished, quite 80's, compared to a lot of the songs on here. The chorus is absolutely HUGE and hits at just 25 seconds.

'Southern Mark Smith' by The Jazz Butcher is brilliant; upbeat with spoken/shouty vocals, handclaps, a great guitar solo/instrumental and a great lyric 'I'm gonna find out what makes your heart sing.'

The guitars are Byrds-esque, it is just beautiful. Described in the superb sleeve notes as 'possibly the quintessential indie-pop song'.

'Something Happens' by The Mighty Lemon Drops is excellent, powerful garage guitar pop with more than a nod to the 60's.

'Is There Anyone Out There?' by Mighty Mighty caught me immediately on first listen to the extent I played it four times in a row. The organ intro leads into a chiming/jangly intro and soon on to the lyric;

The song flows superbly, the vocals (by Hugh McGuinness) contain a hint of Morrissey - perhaps no surprise given it was released in 1986. The harmonica solo towards the end lifts the song.

Elsewhere we have 'Red Sleeping Beauty' by McCarthy, two of whom went on to found Stereolab and a brilliant slice of pinky guitar pop in the shape of 'Big Pink Cake' by Razorcuts.

'Almost Prayed' by The Weather Prophets is melodic and upbeat with excellent guitar riffs. 'A Gentle Sound' by The Railway Children was released on Factory and contains a chorus that just bursts out of nowhere, great stuff.

Disc 4
'Shine On' by The House Of Love (below) kicks things off in style and it still sounds glorious. The chiming guitar intro that you can sing to and the verse leading to the delicious chorus. 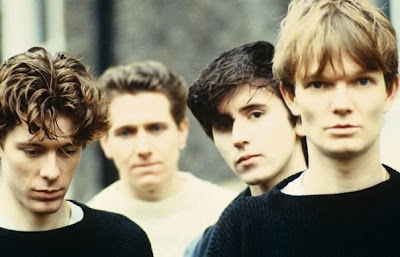 'Love Is Blue' by Hangman's Beautiful Daughter stood out for me, very 60's and with a lovely female vocal. 'Deliah Sands' by The Brilliant Corners sounds like it was recorded fresh after listening to Love - no bad thing in my book. 'Shimmer' by The Flatmates…shimmers in a lovely indie-pop way with a strong melody and chorus.

Glasgow/Scottish bands are liberally sprinkled throughout this boxset (copyright reasons prevented Orange Juice and The Pastels getting tracks on). I'd never heard of The Clouds before, although this probably isn't that surprising considering they only released one single 'Tranquil' which features here. It's a shame they didn't get round to recording/releasing anything else as there is a lot of promise in this single, featuring a young Norman Blake.

'The World Is' by The Hepburns is rather glorious with Marr-esque guitar and rightly compared with Talking Heads in the sleevenotes.

'Son Of A Gun (demo)' by The La's captures a rawness and magic that Lee Mavers would forever strive to find. I remember reading rumours of him buying old 60's recording gear and never allowing it to be cleaned so that the 60's dust remained!


Disc 5
The flowing and chiming 'The Hardest Thing In The World' by The Stone Roses starts off disc 5 with a band. Tucked away on a b-side, all the ingredients that generated so much love for the Roses are on display here.

Their Mancunian counterparts Inspiral Carpets follow them with 'Keep The Circle Around' with ferocious drumming and Clint Boon's trademark organ sound. The pace is fast and furious, a real garage punk 60's vibe going on.

'Indiepop Ain't Noise Pollution' by The Pooh Sticks follow it, charming with its rawness and innocence.

Another excellent title is 'I'm In Love With a Girl Who Doesn't know I Exist' by Another Sunny Day, wistful indie pop.

I'll be writing a blog on East Village very shortly after discovering their debut album 'Drop Out' following its reissue on Heavenly Records at the end of the year. They are represented on this boxset with the tremendous warm guitar pop of 'Strawberry Window'.


I would recommend 'Scared To Get Happy' to anyone with a faint interest in indie pop. The Smiths are an obvious omission (like The Pastels and Orange Juice this is due to licensing issues) but their is so much to discover on a boxset that has been lovingly compiled.

I am finding myself googling bands and delving into their back catalogue as a result of buying this - surely one of the objectives for any compilation/boxset.

Enjoy if you delve in.

Thanks for this review - definitely sounds like it's worth picking up. Most of the Amazon reviews are critical of the compilation in two respects that you haven't mentioned - that the mastering isn't great (the main criticism seems to be too much high-end, not enough bottom end); and that it's difficult to get the discs out of the packaging without damaging them. Did you have a problem with either of these things?

Some of the recordings are quite basic but I really enjoyed it and didn't notice anything like that. I did lose patience getting cd1 out the box!!!1