It felt special, one of those 'I was there' shows, but then every Vigo Thieves show feels like that these days - the King Tuts shows in February, a Barrowlands support with The Fratellis, BBC Introducing and Transmission Stage shows in consecutive years at T in the Park, a rammed Solus Tent at Wickerman, a riot of a show up in Elgin...This is a band determined to create something special...they are succeeding; the word is out and the word is spreading. 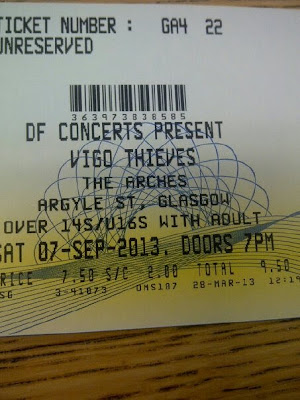 Vigo Thieves have progressed at an exceptional rate since the release of their debut EP 'Heart and Soul Pt I' in February 2012; reviews, airplay, shows, supports, festivals, songs, production, confidence (not that they have ever lacked in that department!), They ramped it up another notch with this show, selling out the Arches.

Support was from Model Aeroplanes, a feisty young band from Dundee and Arches, but the night was all about Vigo Thieves.

The atmosphere built considerably between 8.30pm and the stage time of 9 o'clock as I got a number of fans to help hand out glow sticks to the crowd that were pouring through the doors. The band didn't hang about and came on to their own atmospheric track 'Wide Awake' that opens their debut EP. The layered vocals building Verve/Ashcroft style before the line 'dreams I'm having with you by my side' is repeated.

The band blast into 'Steal Your Heart', the circular guitar riff lifting the already pumped crowd immediately. Glow sticks twirled in the air as the crowd sang back the lyrics and also the guitar riff as frontman Stevie Jukes walked to the front of the stage with his arms aloft in celebration.

'Blood Red' is the oldest song in the Vigo Thieves cannon, revitalised since the addition of Chris Cruickshanks on saxaphone for some songs.

'Viiiigo, Viiiiigo, Viiiiigo' terrace style chants filled the air. Vigo Thieves are a band of the people, positive anthems that almost demand to be sung. 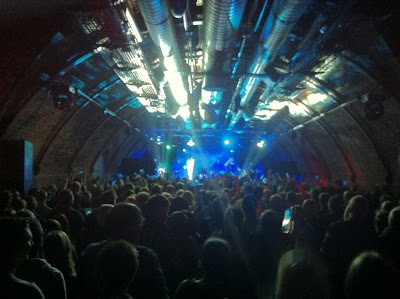 There was a brief interlude as Chris Gorman on piano teased the crowd with the hypnotic riff from 'Heartbeats'. The crowd started singing along, so Stevie started singing with them - it is usually the other way round! It was a spine tingling moment and I've got to admit that tears came to my eyes, this stripped back piano version was incredibly emotional.

The bands motto has always been 'believe' or #believe online. It has served them well and it was natural that a song with that title would come along at some point.


What a song it is! Starting with arms in the air style synths and Stevie Jukes singing like his life depends on it before the rest of the band kick in. Stevie was off the stage and up on the barrier in front of the crowd, shaking hands with the adoring masses and being held up by them.

Do you believe in the fire in your soul 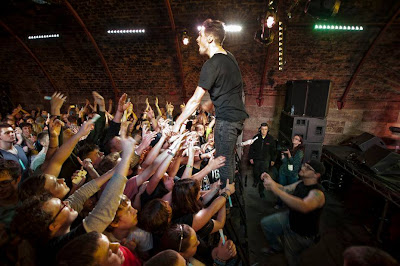 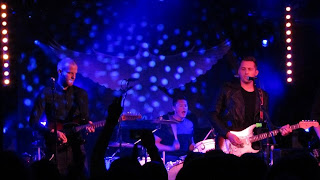 With confidence flowing the band introduced the first of two new songs, the slower yet still anthemic 'Songs That We Sing' and with the crowds reaction you would never guess it was brand new - literally completed the week of the show. Alan Jukes hammered down on his drums during the intro to the point he was leaving his seat. Chris Cruickshanks joined the band again to play flute, highlighting the growing sound that the band have found.

'Forever' is one of my favourite Vigo Thieves songs, it is so cleverly constructed and written so that when the chorus hits for the second time it truly soars to places that other bands can only dream of flying. The band ripped through it.

Let's live forever, together we can stay young

I'd started off the show at the back of the room by the sound-desk to make sure everything was sounding good - it was. By now I was down the front, dancing and singing with the rest of the fans. During this song an older guy was standing next to me, hand banging against his heart. Our eyes met and we shook hands. After the song I found out he had travelled all the way from Wick to see the band! What a guy!

Next up was a song that I have been dying to hear for a couple of months. I'd heard it in soundcheck for the first time and it blew me away, now I was eager to see how another 800 people would react.

'This Love' is a special song. It flows superbly, Stevie Jukes has a knack for that. The band gelled superbly and the breakdown towards the end when Stevie, Barry (guitar) and Chris (piano) come together in glorious 3-part harmonies before the song jets off to the sun. Exceptional.

The band departed to gather their breath. Chris Gorman (keys) and Chris Cruickshanks (sax) came back out first and started a stripped back 'Ghosts' to get the crowd in the mood. They knew what was coming.

The band came back on and hammered into it, Stevie Jukes was urging the crowd on, as if they needed it! The closing instrumental saw the band locked tight in a groove with Cruickshanks allowed to go wild on sax - E-street band-tastic!

'Heartbeats' is the traditional set closer for Vigo Thieves. The place went absolutely mental. The simple piano riff just sticks in your head for days, the lyrics are as heartfelt as anything Stevie Jukes will ever write.

The band all came to the front of the stage with their arms aloft at the end - totally triumphant. This is a band of the people, a band for the people. To get such a huge crowd singing your songs with you was just incredible - anyone for the Barrowlands next year? 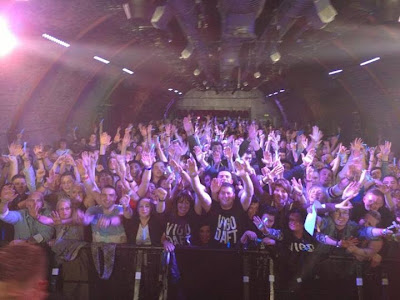 View from the stage at the end, by Stevie Jukes 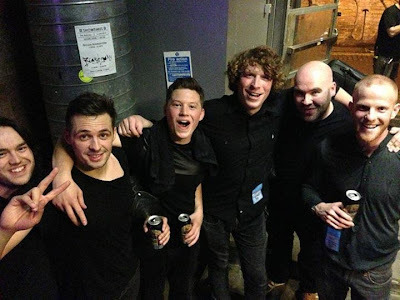