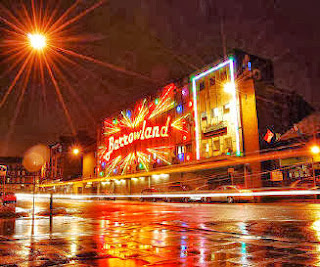 Manic St Preachers slayed the Glasgow Barrowland ballroom last night, digging into their considerable back catalogue and displaying all the credentials that have ensured they remain one of Britain's most loved and enduring bands from the last 30-years.

Opening with 'Motorcycle Emptiness' was a great decision, the crowd were up for it from the off. James Dean Bradfield was straight into it, his voice soared with ease, his guitar playing was exceptional, Nicky Wire bounced about the stage with his bass slung low, glitter and make up on his face making him look like he hadn't aged a bit since the release of their debut album away back in 1992.

There were many highlights; 'Your Love Alone Is Not Enough' was delivered with venom, Bradfield's voice as sweet as a Welsh choir boys at times, as punk as Lydon's at others.

The Manic's are clearly fond of Glasgow and the venue; they announced that it was the eleventh time they had played it and also talked of playing King Tuts back in 1990 and the Plaza. 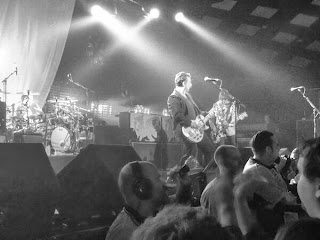 'You Stole The Sun From My Heart' was a joyous romp, the crowd lapping up the huge chorus. If that got the crowd going then 'You Love Us' a couple of songs later took them to another level. The band and crowd were performing as one for this song,

James, Nicky and Sean were ably assisted by 3 others musicians on the night on trumpet, guitar and keys, although they stayed to the side and in the shadows, letting Bradfield and Wire take centre stage - you would have to be a little mad to try and steal any limelight from Nicky Wire!

'If You Tolerate This Then Your Children Will Be Next' was poignant and emotional. The band then departed to allow James to play acoustic. A short 'This Sullen Welsh Heart' was beautiful before James spoke of the kindness displayed to the band when they came to play King Tuts back in 1990 when a lady took them into her house for a Sunday Roast. Her son would go on to become the Manics sound engineer. James announced that she had past away recently and they attended her funeral last week before dedicating Frankie Valli's 'You're Just To Good To Be True' to her. It was stunning and the crowd sang along with gusto.

'I wish a young band would write something like this' said Bradfield before launching into 'Kevin Carter'. The band then played a ferocious 'Motown Junk' before ending with the glorious finale of 'A Design For Life'.

Hands were in the air as the Manics played their biggest hit, with the crowd singing along;


We don't talk about love, we only want to get drunk

It was a spectacular gig. I hadn't actually planned to go until a few weeks before when my mate Tel told me he had a spare. I'm glad I did. James Dean Bradfield's vocals were powerful and emotional, raw when required, his guitar playing was exceptional. Nicky Wire patrolled the stage and looked like he was having the time of his life, changing into a captain's hat for the encore - he sails his ship well.

The Manics announced that they had already pre-booked the venue for April 2014. I imagine a lot of the crowd last night will come back for more.