Wickerman 2013 was ushered in by blazing sunshine and the first sold out event in the festivals history.

We arrived on site a little late at around 4pm on the Friday and had soon pitched our tent and sparked a beer before meeting friends Gordon and Alana.

We had a wander into the site and up to the Solus Tent to see Solar Eye but swiftly decided that Scottish hip-hop isn't our thing, so we caught the last of Dreadzone on the main stage; their dub, reggae house combination sounded pretty damn good in the glorious sunshine.

We helped (or at least Lynn did) Gordon and Alana pitch their tent (thankfully we have a pop up one) and then went back on site to catch some of Admiral Fallow who sounded majestic when they got into full flow. 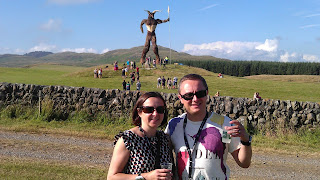 The first highlight of the day was Machines In Heaven, surely one of the most improved outfits in Scotland right now. It has been a long road for Graeme and Greg, but their patience in finding their sound and line-up has paid off and their dreamy electro soundscapes sounded delicious in the Solus Tent. 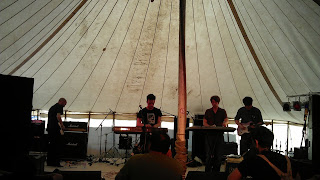 KT Tunstall gathered a huge crowd at the main stage and we caught some of her set in between visits to the VIP bar that is conveniently situated right next door. She even dropped a wee bit of the White Stripes 'Seven Nation Army' into her set.

Friday was all about two acts for me though (no offence to the others). First up were Chic featuring Niles Rodgers and they did not disappoint. I got lost in the music, just dancing and singing along to hit after hit. 'Thinking Of You' by Sister Sledge became my song of the weekend, I still can't get it out of my head.

Niles Rodgers was coolness personified, striding around the stage in a resplendent white suit and shades, playing a unique mix of lead/rythm guitar. Their set was only 1-hour long, far too short. They ended with 'Le Freak' to huge cheers and a whole load of people on stage dancing with them. 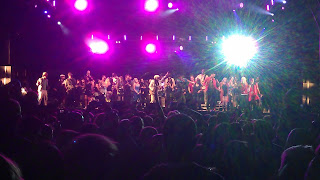 Darkness fell and Primal Scream took to the stage, blitzing the audience with '2013' the opening track from their latest album. The song is full of energy that belies the Scream's years. The hits like; 'Country Girl', 'Jailbird', 'It's Alright, It's OK' (again off the new album) and 'Rocks' generated a brilliant response from the crowd. A welcome burst of 'Shoot Speed/Kill Light' was a real highlight.

There is a time and a place for new songs; '2013' and 'It's Alright, It's OK' are up with anything the Scream have recorded, however 3 or 4 other songs off the new album are not - certainly not when you are headlining a festival. So the mood in the crowd noticeably dipped during tracks like 'Tenement Kid'.

'Loaded' was a riot and the version of 'Come Together' was euphoric. I just wish that the Sceram had played a full set worthy of the title; festival headliners, as they certainly have enough material in their back catalogue. 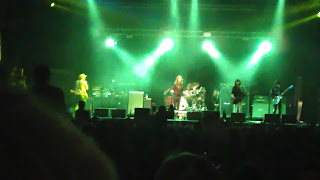 The night ended with dancing in the silent disco and at an open stage DJ bar before we fell into the tent around 1.30am and kept the doors open chatting to the strains of the music in the distance. A top day.

Saturday morning was hazy and lazy. The sunshine warmed our tent to the extent that we had to get up even though we could have done with another couple of hours sleep. So we wandered on to the site with Gordon and Alana and grabbed some breakfast and newspapers from the shop and then headed back for a lazy couple of hours snoozing in the sun.

Acts we caught on the Saturday;

The Recovery - not through choice, the Recovery brought their heavy metal show to Wickerman as the guitarist and singer walked outside of the Solus Tent to play to the crowd at the food stalls. The Recovery may have cleared a few hangovers and not helped some others!

Roddy Hart & the Lonesome Fire -  Roddy's mix of ballads and up temp numbers went down well with the large crowd who were settling in front of the main stage and on the hill for the day. I personally preferred the more upbeat stuff that really showcased the sound his very talented 7-piece band could create. Roddy is a tremendous talent and well worth checking out. 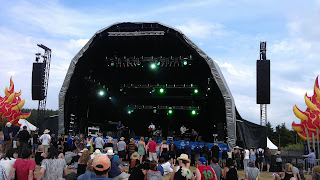 Vasa - are managed by a lovely guy called Gerry Blythe who has put on some great nights in Glasgow (including booking Nevada Base and Vigo Thieves) and he has great taste in music. Vasa are from the Mogwai school of rock and their musical ability sounded way beyond their age (they look pretty young). They could build from a pin drop into a ferocious noise and their bassist impressed. Tight!

Lulu James - Looked and sounded brilliant - real festival act, capable of getting the crowd in the mood and generating a real groove at times.

Bellowhead - I was actually in the media village at the side of the stage when Bellowhead played to a huge crowd and they generated a massive conga - good festival fun!

Dexys - I love Dexys and was pleased to see Kevin Rowland and co pull a big crowd. Kevin looked great and the band ran through a mix of material from their comeback album and old classics. I only stayed for the first 4 songs as I was heading to see... 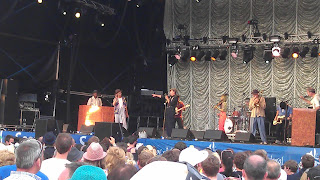 Vigo Thieves - Vigo Thieves smashed T in the Park and their good form improved even further at Wickerman at the Solus Tent, they really nailed it and impressed everyone there. The set is super tight;

'Steal Your Heart' set the tone, big guitars and choruses 'stay young in your heart and your in your mind' with the crowd singing along. 'Blood Red' kept the tempo up and Stevie Jukes was already down in amongst the crowd, vibing off their passion and energy.

'Believe' was epic, it is just a huge song that others can only dream of writing, it is another positive message - make no mistake, they believe and more and more people are starting to believe with them.

'Steal Your Heart Pt II' slowed things down and it sends a tingle down my spine every time I hear it. It contains my favourite lyric that Stevie has written (to date) and it gets me every time.

'Ghosts' was a riot with the band selecting a fan to play air saxaphone as their guest sax player was away on holiday, before 'Heartbeats' closed an epic set. 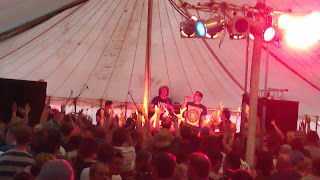 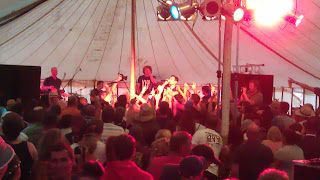