Last night I ventured out to the legendary King Tuts Wah Wah Hut in Glasgow to catch Kevin Harper, one of my favourite artists, performing live as part of the venues Summer Nights run.

Summer Nights is a series of shows put on by Craig Johnstone of DF Concerts during the festival season, showcasing some of the best unsigned and DIY music from across the country.

I've been following Kev since I discovered his old band Little Eskimos. Kev's passion for music is evident through his recordings and performances, his talent is all too clear to see and when you meet him, or catch him live, then you can't fail to fall for his sense of humour. That also comes across on Social Media! 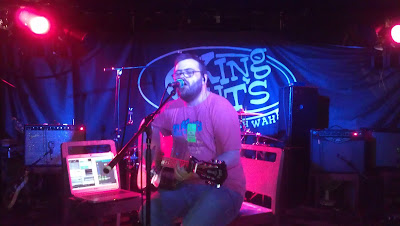 Kev took to the Tut's stage alone and I was initially a little disappointed that he didn't have a band backing him. That feeling soon evaporated as Kev booted up his laptop to back him and his guitar and launched into a little tirade about 'how f**king hard it is to sell tickets for a show on a Monday night'.

The crowd was pretty quiet but the sound of music soon sent people scurrying up the stairs from the bar below and before you knew it there was a decent crowd.

Kev performed a mixture of solo material from his album 'Kingdom of Wires' (reviewed here) (BUY HERE), some Little Eskimo's tunes and 'a cover of a traditional American folk song' that turned out to be The Pixies 'Monkey Gone To Heaven.'

After the opening blast of 'Couch' Kev seemed generally startled by the response from the audience and they easily met his encouragement to step forward to the stage, immediately making the gig seem incredibly intimate.

'Legs' from Little Eskimos was treated as long lost friends, both by Kev and a few delighted female followers in the audience who Kev described as his eskimo-ettes.

'Start It Up' (also a Little Eskimos song) was delivered with ferocious passion, while 'Kingdom of Wires' was a real highlight, tugging on the heart strings.

'Jacqueline' closed proceedings (after the aformentioned Pixies cover) to roars of approval that caused Kev to admit to being genuinely taken back, the show was over. Sadly the chants for 'mmmmooorrrreee' and 'one more tune' were politely declined.

I hope there will be another show soon. Kevin Harper is a warm and natural performer - perfect for those quiet Monday nights and any other day of the week.