There is a show coming on BBC2 later on tonight that will celebrate 20-years of Scotland's largest music festival - T in the Park.

The journey of the festival and the people behind it has been truly remarkable in that time. While I've not been every year, I have certainly been to my fair share. Looking back at the line-ups, I think I went the first 7-years to start with.

It is almost a right of passage for teenagers to head to Balado for a weekend of music.

I thought I would write a blog with 20 memories of my own journey's to T in the Park;

Oasis at T in the Park, 1994
Still one of my all-time fave gigs, only it wasn't a gig, it was a cup final with Liam and Noel even playing football on stage. They were on the crest of an unstoppable wave, a tsunami, they were incredible. I would LOVE to see a video of this.

Rage Against The Machine and Cypress Hill turn up, 1994
Back in 1994 we didn't have mobiles or the internet, so festival rumours swept like wildfire. Back in 1994 we also couldn't believe that someone had booked some of the biggest and coolest bands in the world to come and play in a field in Hamilton!

With announcements that the bands were held up, things were not looking good. However they both played and even jammed a couple of songs together. Both had massive hits back in 1994 and remain cult bands to this day. 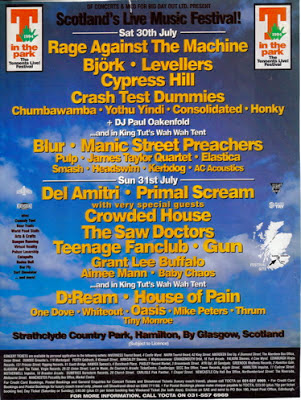 A human pyramid to Crowded House, 1994
I popped my festival cherry in 1994 and have a lot of fond memories. People building a human pyramid to a huge cheer during Crowded House in glorious sunshine was just a real festival moment that brought everyone together. Neil Finn egged them on and it was pretty impressive!

Pulling a Levellers fan!, 1994
Yeah I pulled a crusty. She was from Manchester and she was gorgeous!

Kylie Minogue, 1995
Kylie played in glorious sunshine and i was determined to get near the stage. I ended up leading a conga and snaking my way through the crowd to see her in the flesh. Poptastic!


Black Grape, 1995
Quite a few memories from this year as it was just so glorious. Black Grape kicked up a dust storm with their party set. A crowd of us were right down the front and it was brilliant.

The Charlatans, 1995
One of my fave bands who have played T in the Park on countless occasions. The Charlatans have a lot of love up in Scotland and it was displayed in full. Their brilliant singles from The Charlatans album were perfect for the sunshine.

Someone over turning a portaloo at the campsite, 1995
Funny but quite sickening at the same time. Especially when the person came out - eeuuggghh!

Going to see the Bluetones instead of Radiohead, 1996
Not my best memory of T - totally the wrong choice, as much as I love The Bluetones.

Camping - 97
Another sunny year - the first one at Balado. Their was a huge crowd of us that went up from Carluke and we got there really early to set up camp and drink some beers. Then some lads challenged us to a game of football. It was brilliant, that year was just really special. Lots of friends, sunshine and good music.

The campsite cheer, 1997
A cheer started going around the campsite, everyone started joining in. It was incredible, building and building, getting louder and louder, it was tribal. Then everyone started heading in one direction to congregate near a tent with a huge soundsystem and started dancing. If only we had had phones to record the footage. The guys tent got trashed!

Natalie Imburglia, 1998
I was in love with Natalie and in love with 'Torn' - still a stunning piece of pop music that sounds fresh to this day. Natalie wowed the crowd and me. I was maybe a little easier than others!

Echo & the Bunnymen, 2003
Skipping a few years as we head to 2003. The Bunnymen were first or second on the Main Stage, where my sister Carla had just texted to say she was rather ill after drinking a bit too much the night before. The sun was out and The Bunnymen blasted through their back catalogue.

Polyphonic Spree, 2003
Talking of my sister, she introduced me to a rather special band that year; the technicolour explosion that is the Polyphonic Spree. They were absolutely superb, that debut album was brilliant. Wearing tartan robes had the crowd in the palm of their hands from the off.


Underworld, 2003
One of the best live acts I have ever had the pleasure of watching; ranging from the Barrowlands to Benicassim with T in the Park in between. On this occasion they closed the NME stage and they closed it in epic fashion with Karl Hyde really getting the crowd going.

Orbital, 2004
What a show this was. One of the brothers last before they called it a day, only to come back again. We were down the front, 'Belfast' and 'Chime' were just perfect. And did they drop Bon Jovi or Belinda Carlisle - or both? Good times.

Chemical Brothers, 2004
We hot footed it over to the Slam Tent after Orbital where the Chemical Brothers blew the place away with hit after hit. Tim Burgess joined them on stage looking rather worse for wear but the romp through 'Life Is Sweet' was a hit with me.

The Magic Numbers, 2006
How could the sun not shine for a band like The Magic Numbers. Their debut album was the sound of summer for me that year and they attracted a huge crowd to the main stage.


Vigo Thieves, 2012
And so to last year when Vigo Thieves played the BBC Introducing Stage - I say played, they tore it apart with a euphoric set that showcased exactly how big their songs are. Check this incredible fan footage for 'Heartbeats'. 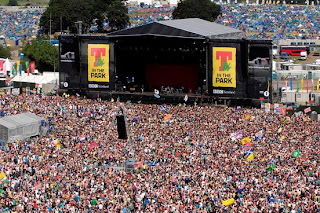