Zidane - A 21st Century Portrait by Douglas Gordon is a film focusing on Zidane playing for Real Madrid against Villareal in April 2005. Seventeen cameras were trained on the magical footballer throughout the match and afterwards Gordon approached Mogwai, his fellow Glaswegian's to provide the soundtrack to the film.

The results have been available on DVD and album for some time, however Mogwai had never performed the album live as the film was being played.....until now. 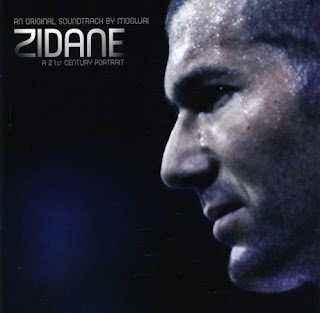 The Manchester International Festival has a first class reputation for combining music with film and art and they approached Mogwai with the idea of playing live to the film. They accepted and additional dates were set up for their hometown of Glasgow and in London.

Their was a real buzz about the show in Glasgow, not only down to the facts above but also because the performance was to take place at a brand new venue/site - 220 Broomielaw, oh, and it was going to be outdoors!

220 Broomielaw is waste ground in Glasgow's financial district on the banks of the Clyde. At some point in the not too distant future it will become an office block similar to those that surround the site, however last night the dusty waste ground was transformed into a mini-festival site.

Doors were opening at 6pm and although the band were not on until 8.45pm I arranged to meet my friends Lorna and Colin at 6.30pm as there had been an announcement of a BBQ and we thought we would make the most of the stunning Glasgow weather! 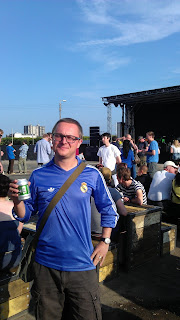 The site was small but perfectly formed - toilets at the back; some cool merch (I got a ltd print) at the back to the side; a beer bar, cider bar and BBQ to one side, sound-desk in the middle and a small pop up bar to the other side with the stage obviously at the front!

The traffic flying over the Kingston Bridge made it all look quite surreal at times. It all generated a great atmosphere.

Mogwai came on stage at 8.45pm promptly and the film began. The film and performance were exhilerating.

Zidane glided about the pitch, his eyes following the ball like a hunter, his feet moving effortlessly when the ball came his way, the sweat dripping from his brow. Everything is captured beautifully and originally by Gordon and his team, I especially liked the rare smile from Zidance to Carlos towards the end. Zidane's focus on the ball and the game is complete.

Mogwai were all seated, caressing their instruments (well maybe not the drum kit) and building waves of sound from nothing. We started off stage right but soon moved back due to the volume (class Mogwai) and it worked in our favour as it was good to take the whole thing in; film, music and the site.

Mogwai excel in producing emotional and inspiring instrumental post-rock music and to see them doing it in this setting with Gordon's film playing behind them was truly memorable. Their music was delicate when required, it rose and soared at others and when required it was furious and intense. 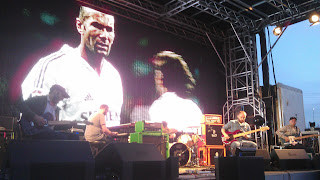 Gordon's portrait of Zidane is incredible, yet one of the most memorable parts of the film (or certainly last night) was the piece that Mogwai played to soundtrack the half-time section of the film. At half-time Gordon's portrait cuts to other events that happened around the world during the game; in many ways it reminded me that 'football is only a game'. Mogwai's soundtrack to this section of the film was sensational as they generated all kinds of controlled white noise from their instruments. 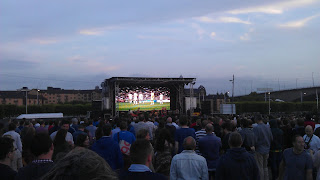 It really was quite an incredible night and Stuart Braithwaite from Mogwai was quick to thank everyone involved in making it happen. That was echoed by everyone in attendance, this was a remarkable display of music, film, art and venue (and weather) combining to create something unique and beautiful.

A short clip from the film is posted below;

I saw it in Manchester the night before. Venue was a converted church/ mission hall. It really was something special and the sound incredible. Almost total silence from the audience which is increasingly a rarity these days. One of the best things I've ever been to. It's often easy to forget how special Mogwai really are.