18-years since Definitely Maybe by Oasis

Definitely Maybe by Oasis was released on Creation Records 18-years ago today. Half a lifetime ago for me, half a world away.

1994 was a glorious summer, Oasis came along at exactly the right moment for me. I was 18-years old and looking for a band to fall in love with. Oasis stole my heart.

The live reviews in the NME, the songs given away on cassettes on NME and Select Magazine,  the interviews, taping sessions off the radio....it was a blast. The 94-96 era of Oasis just completely smashed everything else into oblivion. Noel Gallagher had a plan, tons of great songs, a great front man and the right record label to just go for it.

I caught Oasis in April 1994 just before the release of their debut single 'Supersonic'. They supported The Boo Radleys at the Tramway for Glasgow Sound City. The gig was recorded for Radio 1 and you can hear me and my mates shouting the very uncool chant 'Oasis...barmy army'. Hey, we were 18!

Then it was a stunning gig at the old Cathouse. Oasis came on late after the full Best of Sly & the Family Stone album was played. That was followed by one of my all-time fave gigs in a tent at T in the Park with Liam and Noel playing football on stage. I didn't want it to end. Then in December Liam stormed out the Barrowlands after his voice went a few songs in and Noel finished the gig, telling us to keep our ticket stubs and they would be back. They did come back and they were incredible. Oasis in 1994 were my dream band. 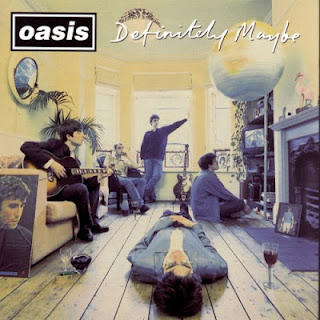 To start with, the cover is a classic. Designed by Brian Cannon from Microdot (Definitely Maybe is in his handwriting) it just looks great.

'Rock'n'Roll Star' is a total statement of intent. It explodes into life, searing and soaring guitars and a young Liam Gallagher (he was 21 for most of 94) singing his heart and lungs out.

I need some time in the sunsheeeee-iinnnne

That Lydon-esque delivery had kids all over the UK hooked from first listen. Noel's lyrics of dreaming of a better life are throughout the album and the b-sides from the time.

I live my life for the stars that shine, people say it's just a waste of time

Anyone who says that Oasis lyrics don't mean anything hasn't bellowed this out as a youngster.

The Gallagher's had the cheek and confidence to even deliver

Believe me, in 1994 I was in the palm of the Gallaghers hand. The power they displayed live was incredible.

'Shaker Maker' was a real live favourite, from memory they opened with it quite a bit in 1994. The 'shake along with me' section was brilliant live, Liam sneering the vocal down the mic.

'Live Forever' is just majestic. Listening to it just now on headphones, it still sends a shiver down my spine. Noel Gallagher laid a marker down with this song and you could question if anyone ever came close to it.

The song flows beautifully, the chords, the simple drums, Liam's voice is perfect and then Noel's guitar solo just lifts things even more.

'Up In The Sky' was another live favourite. I remember bouncing like a loony to this at the Cathouse. The bit where it all breaks down other than Noel's guitar and Liam singing 'I can feel you, can you feel me' was a total hands in the air moment before it all kicked in again. That sense of euphoria was all through the album, a pure rush.

'Columbia' always reminds me of Knebworth when it opened the show. I still kick myself for not buying a white label 12-inch of it in Missing Records for £20. That was a lot of money for me back then, it fetches £200 now.

When the groove kicks in it just doesn't stop. The beat is the 'danciest' on the album. Liam is at his sneering best, his voice is truly remarkable on this album, one of the great rock vocal performances.

I mentioned a sense of euphoria for 'Up In The Sky' but 'Columbia' multiplies that by 100.

'Supersonic', the debut single. The power is there, almost punk like, the production from Owen Morris is exceptional. Noel said he wanted it to be louder than anything else being released so it stood out if it was played by a DJ or on a jukebox. Morris delivered...and then some.

OK some of the lyrics are complete nonsense, but there are also gems of Gallagher philosophy in there that really spoke to me as an 18-year old.

You need to be yourself, you can't be no-one else
and
You need to find a way for what you wanna say, but before tomorrow

Tony McCarroll was booted out Oasis for his limited ability on the drums but I think that was to Oasis advantage back then. Simple beats, toes tapping, people bouncing. Let Liam and Noel take over.

'Bring It On Down' was Alan McGee's choice for the debut single and you can understand why. It is punk rock, 100mph. Liam in full on Lydon mode.

You're the outcast, you're the underclass

This song is over 4-minutes long. Played live, Oasis probably took a good 30-seconds off it!

'Cigarettes & Alcohol'. A total anthem! Noel used to hammer out the starting riff to this at gigs in 1994 to get people excited and then go and play something else, a total tease.

The riff is T-Rex x 100. Hammered out. But for me, this song is all about Liam Gallagher. His vocals are exceptional for a 21-year old.

Is it worth the aggrevation to find yourself a job
when there's nothing worth working for?

Liam's delivery of sunshine was just top; ssssuunnnnsheeeeeyyyiiiinneeee. Brilliant, the energy in this song just leaps off the vinyl.

'Digsy's Dinner' is a laugh. I would much rather 'Fade Away' was on the album. Again it does contain a great line for an 18-year old;

'Slide Away' might just be my favourite Oasis song. It is sheer beauty, it tugs on heartstrings, it makes you punch the air, sing from the top of your lungs, hug your mate, hug strangers....it is stunning

The middle eight lifts things and then the chorus just takes off for the sun.

Noel's guitar is melodic and soaring, Liam's vocal delivery is the most soulful on the album. This is Oasis at their very best.

At the time Noel described 'Definitely Maybe' as 10 singles and a nice corny track at the end. That sums it up very nicely. A mate of mine has just posted on Facebook that in 1994 we all wanted to live forever and now we are all 'Married With Children'!

So there you have it, except that on the vinyl edition you had the bonus of 'Sad Song', surely one of Noel's best ever songs, certainly one of my faves.

Sung by Noel, this is incredible, highlighting how good a songwriter he was and capable of becoming with future anthems like 'Wonderwall'.

18-years on, it is like it was yesterday. This album is one of the real soundtracks to my life, it came along at the perfect time and will always remind me of those times.
Posted by everythingflows at 14:31