A band called The Velveteen Saints sent me an email earlier this week asking if I would check out their video for a song 'Rock 'n' Roll Is Dead' and invited me to come along to their next Glasgow gig at the Berkley Suite on 7th September.

I liked what they had to say, relatively short and sweet but it all made sense - they didn't want to play 4 or 5 band bills and 11pm 'headline' slots so they booked Blackfriars in the Merchant City and had a party, entry was via a £1 pin badge. 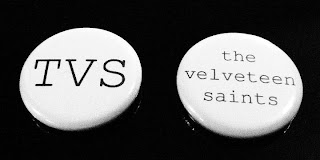 This is the resulting video 'cobbled' together from fan footage.


The grainy footage and sound resembles early Black Rebel Motorcycle Club, as does the frenetic energy and pace of the song.

A shout of '1-2-3-4' kicks off a punk rock riff and a fast paced verse leads to a catchy bridge over mass handclaps.

hear the radio, play the songs I don't know

This leads to an even catchier chorus that stuck in my head on first listen, the first of many.

Strummer is gone and he's not coming back
He's hanging with the King and the man in black
All of you people, you don't know jack
Get it in your head
Rock'n'Roll is dead

It's under 3-minutes long and it is pop-punk-rock brilliance. Simple, energetic and effective. Catchy, spunky and punky.

I definitely intend to try and get to the Berkley Suite on 7th September.

The band only formed in April yet they already have a collection of songs on Soundcloud, the best of which (in my opinion) is 'Wake Me Up' which has a great feel to it, more glorious hooks and again it reminds me of BRMC.

Check 'em out.
Posted by everythingflows at 13:28