London 2012 was wrapped up a week ago tonight, the closing ceremony was somewhat under-whelming in comparison to Danny Boyle’s epic opening, yet both ceremonies clearly highlighted how important music is to British culture. 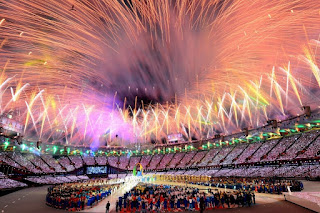 We certainly have plenty of musical talent to choose from and some of the names listed below would be more than capable of producing a specially written soundtrack for the ceremony – think Craig Armstrong, Mogwai, Bobby Gillespie, Mylo or Calvin Harris.

Putting my own musical preferences to one side and thinking of music and artists that would truly represent Scotland, my own 1 hour-playlist for Scotland would be;

That is a pretty safe choice and there are some shoe-ins there that you have to think you could place your mortgage on. Texas, Deacon Blue, Travis, Wet Wet Wet and Simple Minds are the other big names that will likely feature on the committee's 'want' list. Lets not forget Annie Lennox...

Aztec Camera – Roddy Frame with the triumphant ‘Somewhere In My Heart’…’love will see you through’
BMX Bandits – leading the crowd in a sing-a-long of E102’s ‘I’m so happy that love has come around’ chorus
Primal Scream – ‘Movin’ On Up’, ‘Come Together’ and really getting the party started with ‘Loaded’
Superstar – ‘Superstar’ – for the Superstars that will come out of the Games

Beta Band – a reformed Beta Band with the classic ‘Dry The Rain’ - as we really don't want it to rain like it has this summer!
Franz Ferdinand - 'Take Me Out' - an indie anthem
Belle and Sebastian - 'The Boy with the Arab Strap'
Teenage Fanclub - 'Ain't That Enough'

Closing the night in style would be the Optimo DJ's.

To bring the mood down we could bring on;

Never mind an opening ceremony, lets get a festival of the best of Scottish music on the go!

In short, Glasgow (and indeed Scotland) will not be short of options when it comes to music in 2014 and we should make the most of the opportunity to highlight some of the fantastic artists that the city and country has produced.

I love the idea of runrig doing loch lomond at the closing, with Donnie back for a one of ,that song makes me proud and gives me goosebumps.
but what about rod Stewart doing purple heather too