‘Hear the truth in my voice, with the songs that we sing’ – Hearbeats, Vigo Thieves
It’s always a pleasure watching a band on top form; smashing it, a gig that will live long in the memory, exciting fans new and old. On Sunday I watched Vigo Thieves play the BBC Introducing Tent at T in the Park and they blew me away.
The progress of the band during the first 6-months of the year has been nothing short of staggering. It started with a headline slot at Tuts in January and it has continued with sold out shows in Sleazys and the Art School, trips to London, YouTube videos that are approaching 100,000 views, the Stag And Dagger Festival, radio play, excellent reviews…..it was all building up to yesterday and the band didn’t disappoint.
Ten minutes before the Vigo’s took to the stage, I helped hand out 200 glow sticks to the crowd. The band did this for the first time at Sleazys in February to celebrate Gordon’s (bass) birthday and they transformed a dark dingy basement (no offence to Sleazys) into a festival style atmosphere. We repeated the trick at the Art School in May and again yesterday. It is becoming something of a trademark for special Vigo’s shows.
The lights dimmed and Vigo Thieves appeared on a stage bathed in red light, glowsticks were being held aloft or twirled above peoples heads as the opening chords of ‘Blood Red’ came crashing in. Vigo Thieves were clearly up for it and had spent the morning locked in practice to ensure they were at peak condition for T. With the audience singing the guitar riff back at them the band lifted it up another notch, if that was somehow possible. 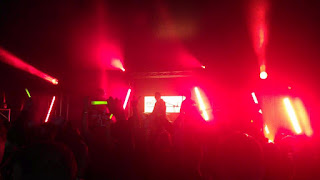 The stabbing synths of ‘Love Is Dead’ and the epic chorus spirited the crowd away from the muddy swamp outside as people jumped in time to the beats.
‘Steal Your Heart (Pt II)’ is probably my favourite Vigo’s song, it certainly contains my favourite lyric of 2012. The song builds into a crashing crescendo and the band were joined on stage by the gorgeous Madaleine Pritchard to assist on the huge ‘woah, oh, oh, woah, oh oh oh’ chorus at the end. Chris Gorman on keyboards and synths assisted throughout the night, just adding to their already massive sound.
You’re looking for the love to heal the pain from all the scars,
so just live for the moment and you’ll shine like the stars
It was euphoric, only introduced to the bands set at the end of May as it was very much created in the studio, however with Chris and Maddy guesting with the band, they nailed it live. The keyboard riff sounded huge and as bassist Gordon Phipps raised his hands in the air, the vast majority of the crowd followed suit. Perfect for a festival.

‘She’s On Fire’ kicked in, sounding like it should be blasting out from the main stage rather than the BBC Introducing Tent which was rammed to the seams.
It’s burning inside, this feeling so strong 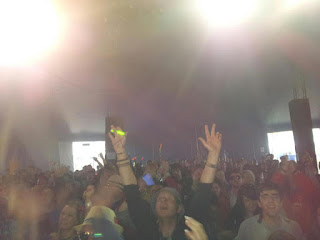 ‘Steal Your Heart’ got the place bouncing, the circular guitar riff sitting so well alongside another huge chorus and Stevie (vocals) got the crowd to sing along with the ‘Woah-oh, oh oh oh – woah-oh, oh oh oh’ section at the end.
Stay young in your heart and young in your mind
Someone threw a Scottish football top up on stage with the number 12 and T in the Park on it. Stevie took off his jacket and put it on to huge cheers before the final song ‘Heartbeats’, the song of the set and the song of the festival as it has been used on the T in the Park website since the line-up announcement in February, earning the band loads of new fans and they were there to bounce and sing-a-long yesterday. Chris’ live piano riff was great, it is a song that I imagine Chris Martin from Coldplay wouldn’t mind having in his cannon of festival/stadium anthems.
Check out this incredible fan footage;
Hear the truth in my voice, with the songs that we sing
I started this blog with the above lyric, lifted from ‘Heartbeats’. In many ways it portrays the strength of Vigo Thieves. They wear their hearts and influences on their sleeves, the lyrics are straight from the soul and sung from the bottom of the heart, they offer reflection but with a strong sense of purpose, desire and ambition.Scotland needs a band like this. Everyone needs a band like this. A band with heart and soul. Vigo Thieves.
Posted by everythingflows at 12:20