I follow Alan McGee on twitter. Madman, genius, he was a guy who put out some of my all-time favourite records through Creation Records. My life would be quite a lot different without Alan, Creation or the bands he discovered, promoted and released.


Alan just tweeted a link to the entire first night of Oasis at Earls Court back in 1995. A seminal gig by the band. I'm watching it just now and they were just on it, totally on top of their game. 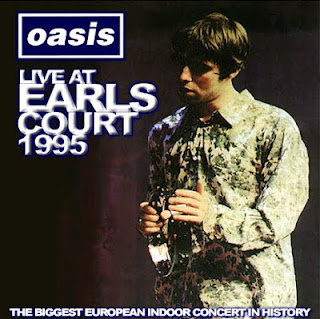 Oasis came along at the right time for me. I saw them for the first time in April 1994, 3-months after I turned 18. They were supporting fellow Creation band The Boo Radleys and in a short set they blew them off the stage.


They were my band, especially for two glorious years from 94-96, I caught them quite a few times along the way; the Tramway, The Cathouse, an amazing show in a tent at T in the Park, the Barrowlands (twice as Liam walked off the first time), Ingliston Market, Sheffield Arena...culminating in a trip to see them at Knebworth with my mate Elliott. Somehow we blagged and bribed our way into the front VIP trip. Seeing Oasis with 125,000 people behind us was a buzz that still sends tingles down my spine.

The footage from the first night of their Earls Court shows probably captures them at their coolest. Liam just looks fantastic, great haircut, cool shirt and he makes a real rock star entrance. I've never seen another front man who can command so much attention. 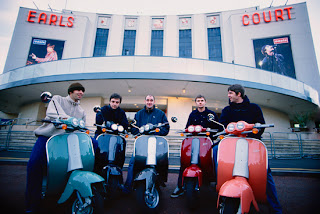 Noel bought all of the band a scooter for the shows!
Oasis, Liam and Noel, have their knockers. Any band that gets to be that size and has two brothers that like to talk so much is going to have people who knock them.
The footage below speaks for itself. Liam's voice is incredible, he was only 23 for this show. Anthem after anthem is belted out by a band on top of their game, completely tight as their chief, Noel Gallagher leads them through an exceptional performance.
The audience sing-a-long for 'Wonderwall' at 56 minutes in sends shivers down my spine. It was a song that captured the nation. I remember going for a night out in a rival town (Wishaw) and being totally wrecked with a couple of mates. We attracted some 'attention' from a group of lads as we walked up the street and they came over menacingly. I was wearing an Oasis tshirt and within seconds we were all singing 'Wonderwall' and being invited to a party!

Where were you while we were getting high?