East of Underground - Hell Below

I nipped into Monorail Music on Monday after work. The weather was typical of summer 2012 in Glasgow, chucking it with with rain. I was in the mood for some solace, flicking through records and cd's to see what I could find before I went off to get soaked playing five-a-sides.
I hadn't really gone in to buy anything in particular, however I don't tend to leave Monrail empty handed when I go in.
I immediately picked up 'Searching for the Sugarman' the soundtrack to a new documentary coming out about some fans searching for obscure 60's artist Sixto Rodriguez. His music has long been out of print and I am only aware of the song 'Sugarman' (check the song below) through an excellent compilation album I own by David Holmes. I decided to buy latest Spiritualized album 'Sweet Heart, Sweet Light' after someone had posted the video for the single 'Hey Jane' online. I browsed through the latest released and then alphabetically, discovering LCD Soundsystems 45.33 that I had never bought, it was only £3.99. I'll hopefully get around to blogging about them later.
I moved to the soul and funk section and my eyes were immediately drawn to a boxset that I had read about at the start of the year; East of Underground - Hell Below. 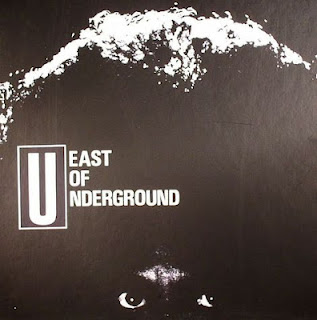 I knew I was buying it there and then. I had previously spoken to Russell in Mono about it and he had promised they would get it in. Well here it was.
The features I had read about the boxset were fascinating. The armed forces have long recognised that entertaining the troops is central to keeping on-going campaigns on an even keel. In 1971, the US army went a step further, using bands (East of Underground, SOAP, The Black Seeds and The Sound Trek) of serving soldiers both to entertain and as a recruitment tool. For the bands, it was also a way of avoiding being sent to Vietnam.
This fact makes you think of the songs and lyrics in a new way.
Imagine being a young soldier and SOAP (with a female on lead vocals) singing The Beatles 'Ticket To Ride' . The vocals are a lot sadder than the original version.
I think I'm gonna be sad, I think it's today.
The boy that's driving me mad is going away.
SOAP also do a beautiful reading of 'You've Got A Friend'
If the sky above you should turn dark and full of clouds and that old north wind should begin to blow,
The recordings are rough and ready, taken from old vinyl records as the masters are long lost. Only one surviving member of the groups (Lewis Hitt from East of Underground) came forward during the painstaking research, so the music and the period surrounding the performances remains shrouded in mystery. 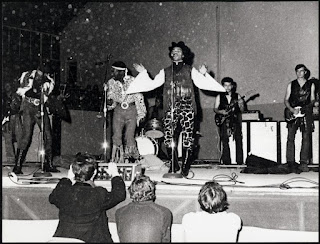 The only (known) surviving picture of East of Underground
East of Underground are a bit more down and dirty than SOAP (no pun intended). Their own highlights include a stunning song called Smiling Faces Sometimes (listen below) and a gorgeous take on I Love You For All Seasons by The Fuzz. The third CD (or record if you go for the vinyl package) is split between The Black Seeds and The Sound Trek and this is the only music that was actually released at the time.  The Black Seeds open with 'Go Outside In The Rain', slow soulful and jazzy. Quite beautiful. It does sound like some live applause has been dubbed on top of it...or maybe the audience were really just that polite. The set continues in a laid back manner, stoned soul. 'Ain't No Sunshine' is a highlight.
Sound Trek's set is also live, probably a little more MOR smoochy soul than the other bands. 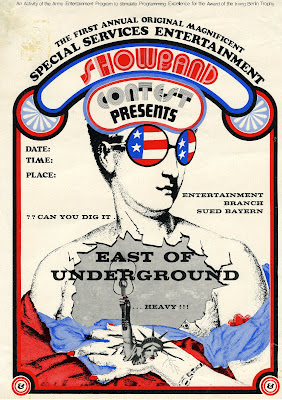 The boxset comes with a brilliant replica poster
This is a tremendous boxset, full of mystery, intrigue and great music. I would highly recommend checking it out if you like 60's music, soul, funk or even a bit of garage or psych. 10/10 to Now Again Records for this discovery, release and the stunning packaging and artwork.
The complete tracklisting (vinyl edition)
LP 1: EAST OF UNDERGROUND A1. Higher A2. Smiling Faces A3. Hell Below A4. People Get Ready A5. Getting Over B1. Bet'ya Never Lose My Love / California Dreamer B2. Popcorn / Santana B3. I Love You B4. Java Girl B5. Walk On By LP 2: SOAP A1. I Just Want To Celebrate A2. Yo've Got A Friend A3. Southern Man A4. Medley : Will The Circle Be Unbroken / I Don't A5. Know How To Love Him A6. Ticket To Ride B1. I Feel The Earth Move B2. Uncle Albert B3. Gypsies, Tramps And Thieves B4. Never My Love B5. Walk Away B6. Get Together LP 3: THE BLACK SEEDS A1. Go Outside In The Rain A2. Ain't No Sunshine A3. Black Magic Woman A4. Do Your Thing A5. Backstabbers THE SOUND TREK - B1. Intro (Kool And The Gang) B2. Walking In The Rain B3. Backstabbers B4. Coldest Day Of My Life B5. If Loving You Is Wrong B6. I Love Everything About You
Posted by everythingflows at 13:16