10 things I love about LCD Soundsystem

If I was asked to name my favourite band or artist since the dawn of the new century then it would probably be LCD Soundsystem. I fell for them in quite a big way.
Ahead of the UK cinema release for the documentary ‘Shut Up And Play The Hits’ about their last show, I jotted down 10 things I love about LCD Soundsystem.
10 things I love about LCD Soundsystem;
James Murphy is LCD Soundsystem. There is no doubt about that, however Murphy is also very clever in the way he gets a group of like minded people around him, all pulling in the direction(s) he wants to go. And Murphy does like to go off on various tangents – Songwriter, producer, co-owner of DFA Records, DJ, writing scores for films… 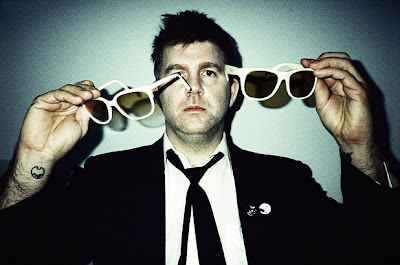 Murphy is one of these people that are just naturally cool. He doesn’t need to try; he likes all the right music, he has a fantastic ear for music and he creates and releases outstanding music.
The melting pot of musical influences that Murphy is into is reflected beautifully by LCD Soundsystem and via the vehicle he uses to release his music. DFA is one of those labels that you can mention to someone who is into their music and their ears will prick up, they will be interested to know what they are releasing as it tends to be different from anything else and quality with it. 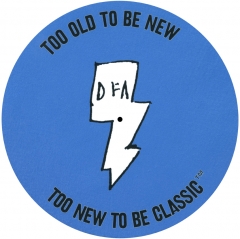 Listen to Murphy’s Fabric Live.36 compilation with Pat Mahoney (drums). His taste is impeccable. For the track-listing visit http://en.wikipedia.org/wiki/FabricLive.36 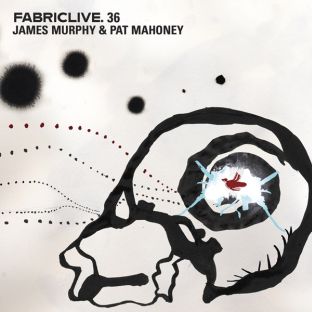 As debut singles go, this is definitely up there with the best of them. I’ve already mentioned Murphy’s influences and taste and he rhymes them off on this incredible debut. It is funny, hip and happening, as Murphy talks about how he was into all the cool music before anyone else although he is worried about the younger kids coming up behind them. Described by Murphy in The Guardian as "an eight-minute, laugh-out-loud funny dissection of cool over a dirty electronic beat"
Get a geeky list of all the artists mentioned HERE 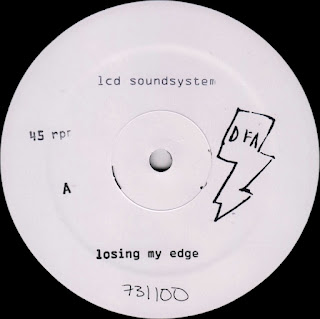 I used to work in the record store.
I had everything before anyone.
I was there in the Paradise Garage DJ booth with Larry Levan.
I was there in Jamaica during the great sound clashes.
I woke up naked on the beach in Ibiza in 1988.

But I'm losing my edge to better-looking people with better ideas and more talent.
And they're actually really, really nice.

James Murphy made cowbells cool - fact. The integration of live percussion and electronica created something special. Listening back, particularly to the early stuff, it sounds live, but did they laythe electronica stuff down first and then play the percussion on top? Or vice-versa? Or is it live? Who cares, it sounds fantastic.
Incredibly I couldn't find a picture of James Murphy playing a cowbell. I only looked for 2-minutes right enough!
Time Magazine made it song of the year and said the songs “straightforward repetition of the same guitar, keyboard and bass lines, combined with lyrics about life without regret, and life with all kinds of regrets pays off with a punch about what we lose as we get older."
Can I put it any better than that? Probably not, it just comes in and grooves on so many different levels. I love the lyrics about checking the charts, the sun coming up and still wanting to stay out and everything leading to the emotional climax when Murphy chants;
Where are your friends tonight? Where are your friends tonight? If I could see all my friends tonight If I could see all my friends tonight If I could see all my friends tonight If I could see all my friends tonight
Extra cool points for the brilliant cover version by Franz Ferdinand for a b-side.
Garage band rock, electronic wig outs, funk, punk, crooners..... Murphy and LCD Soundsystem adapt to any style with ease. In short, anything goes and everything flows.
Murphy mentioned in several interviews, particularly around the release of the last albumthat he though LCD Soundsystem would ‘make three albums and that’s it’. He stayed true to his words. Three albums, some one-off singles/EP’s, touring the world…He had poured an incredible amount of time and energy into his artistic vision and it worked…perfectly. So why ruin it? He didn’t. 9-years and he was out of there, leaving a brilliant legacy behind; all 3 albums are excellent from start to finish, there are the non-album singles, the track for Nike... If only other bands knew how to quit at the right time.
I caught LCD Soundsystem live a number of times. The first time was at the Barrowlands supporting 2ManyDj’s/Soulwax. It was a messy and memorable night. Then at Benicassim in 2005 they came on at something like 3 in the morning and blew my mind. 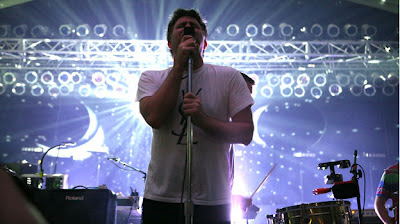 The last time I caught them at the Barrowlands was even better. They were on fire, Murphy at the front but to the right, a massive bank of synths and keys at the back, everyone playing with huge smiles on their faces. An incredible performance full of heart, soul, energy and enthusiasm.
Not many bands/artists know when to end. LCD Soundsystem have done it perfectly, allowing just a touch of nostalgia with the 'Shut Up And Play The Hits' documentary.
It looks like it was an incredible show.
Posted by everythingflows at 08:15

11. The enigmatic video to the plaintive, yearning Someone Great.