I always get a buzz when I see (and hear) and band nail a gig. The sound is loud and clear, the band gel on stage, the crowd respond.....everything comes together.
Vigo Thieves nailed it last night as they headlined a sold out King Tuts as part of the New Years Revolution series of gigs. It was a brilliant night.
The night started in the Variety Bar as I met Mick, Craig and Kirsten for a few beers in one of my favourite Glasgow bars; great scuzzy but cool art deco feel, superb music and very cool barmaids ;-)
I had soon forgotten about Motherwell's atrocious performance against Inverness earlier in the day.
We headed down to Tuts just after 10pm and managed to catch most of the Cherri Fosphate set. Not a great band name, but I really enjoyed them. Young lads in their late teens/early 20's playing guitar pop with echoes of Orange Juice. The last song 'Passion' was cracking.
On to the main act though. We started off the gig up by the sounddesk for a good view and a chance to appreciate the sound.
The lights went down and the Vigo Thieves came on to terrace style chants of 'Viiiiiigo, Viiiiigo', the atmospheric 'Wide Awake' that opens their forthcoming EP was playing and then the band burst into opener 'Steal Your Heart', the circling guitar riff lifted the crowd immediately, the beat was simple but strong and the crowd sang along to the hooks;
Stay young in your heart, and young in your mind 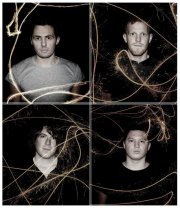 As openers go, this was a good one and halfway through the song Mick had said he was going down the front to join in with the jumping and singing.
I stayed up for the next song 'Heartbeats', the band announced they hadn't played it live before. It didn't show. A rumbling bass with echoes of U2 underpinned a simple piano riff and singer Steve Jukes got the crowd to clap along. This is a total festival anthem in the making.
A song to clap along to and plenty of 'woah oh oh oh' backing vocals to sing along to, the fact the crowd were doing this on the first live airing of the song must have been a joy for the band on stage.
'Start the fire, let your heartbeat, let your heartbeat'
I finished my beer and went down to join Mick at the front.
I reviewed the bands last single 'Love Is Dead' on this blog and gave it a great review, it sounded even better live through the Tuts sound system.
The pulsing bass for the verse leading to a huge synth riff for yet another sing-a-long chorus.
This love is dead, feeling that you can't go on
This love is dead, in the shadows waiting for false dawns
This love is dead
The crowd bounced along to the chorus, the band looked like they were having the time of their lives on stage.
The next song 'She's On Fire' was the most epic yet, pure Simple Minds. A slow start before beats and synth kick in. Singer Stevie Jukes abandoned his guitar and took the mic from the stand to sing his heart out, whilst lead guitarist Barry Cowan coaxed Edge style riffs, bassist Gordon Phipps and drummer Alan Jukes were locked in the groove.
The flow of this song is outstanding, it is also on the forthcoming EP and it is crying out to be played on the radio. It swoops, rises and soars in all the right places.
The band closed with one of their older songs, the brilliant 'Blood Red', clearly a favourite with their fans as they sung along to the catchy guitar riff, jumped about like loonies and sang the chorus back at the band, me and Mick joined in.
Someone has already posted a video online, the sound isn't great but this will give you and idea of how much the crowd and band were up for it.
The crowd yelled for more but it was curfew time.
This is a band clearly on top of their game with anthems in the making. I look forward to the release of their EP in February.
Posted by everythingflows at 04:13