Last night I ended up in King Tuts for my first gig of 2012 on a guest pass courtesy of my new management partner Tam Coyle to catch one of the most blogged about bands in Scotland just now, young Edinburgh trio Discopolis.

Our pre-gig debate about how good it would be if their name was pronounced (in a real Scottish accent) 'Disco Polis' as in how a ned would say 'Polis', or (as we both kind of knew) pronounced 'Disc o polis' (rhymes with metropolis). It was confirmed as the latter when the band came on stage and introduced themselves.

Discopolis were headlining one of the King Tuts New Years Resolutions nights and early reports from the first few nights had indicated large crowds with a couple of sell outs. Young Tuts booker Craig Johnston has done really well with the New Years Resolution and Summer Nights formats; allowing the cream of the crop of independent and DIY bands in Scotland the chance to grace the hallowed Tuts stage and generate some publicity for them at the same time.

Sadly the crowd was a little sparse last night with the top half of King Tuts closed off to keep people in the lower section. As I hadn’t completely planned to be at the gig I didn’t catch the support acts, so I can only report on Discopolis.

They started with a rather slow song and took a while to warm up. They then announced that they were going to slow things down and just as I was thinking that it couldn’t get much slower for an electro-pop band, it did. The second song sounded like a cover but it segued cleverly into their single from last summer ‘Lofty Ambitions’. The band and the audience were warming up and Discopolis showed why they are receiving so many good reviews and opportunities with a brilliant blend of warm synths, beats, guitar melodies and a brilliant hook;


The young guitarist who was on stage right (as I was facing) caught my ears, his melodies were playful enough to be a little different from the norm. A couple of songs passed me by but the closing three highlighted the bands promise with the second last song sounding like a potential summer/festival single. By that stage the singer had urged the crowd to step forward to the stage and this seemed to lift the band.

The closing song morphed into an excellent groove that I would happily have listend to for ages, I look forward to the extended 12-inch mix of it. However a curfew brought the set to the end, with the band receiving an enthusiastic reception. 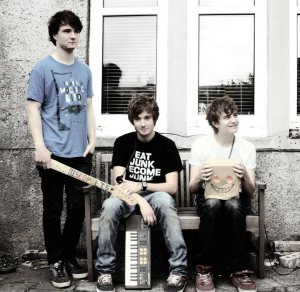 This was the second time I have seen them after catching them in the Solus Tent at Wickerman in the summer. I would say I preferred that set, the festival vibe seemed to suit them better.

It is early days for Discopolis, yet they have had an incredibly productive 8-months or so with festival appearances, playlisted on daytime Radio 1, an album release in Japan and all manner of praise from blogs and journalists seemingly faling at their feet.

The band do seem to be receiving a rather remarkable amount of hype, too much in my own humble opinion. I do hope they get the time to develop their early promise and I look forward to catching them again in the future.
Posted by everythingflows at 04:15