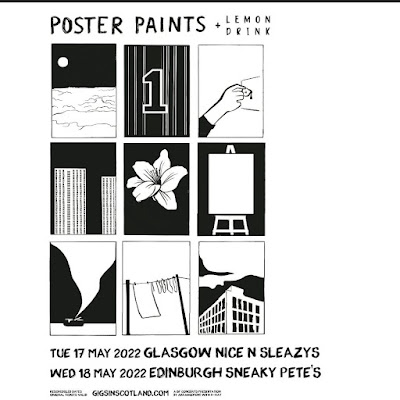 Prior to last night I couldn't recall the last time I was in Nice n Sleazy. Way over 2-years ago for sure.
The legendary Glasgow pub and club/venue has been sitting proudly and prominently on Sauchiehall Street, near Charing Cross, since 1991.

Quite an achievement given the state of Sauchiehall Street at present. A rather sad and grim video was presented on social media last week, highlighting the vast amount of leases available. Large sites like M&S, BHS and the ABC. Glasgow institutions like Greaves Sports & Biggars. It's becoming a ghost town.

As someone who walked along this street most days from 1993-2004 when I worked at Charing Cross and the top of St Vincent Street, I hope that somewhere, someone is putting together a vision and plan to regenerate this famous street in Glasgow. Wider pavements, some trees and cycle lanes ain't gonna cut it.

Last night was the first time in a over 2-years that I'd ventured to this part of the city. I cut up past favourite bars of mine from years gone by like The State and The Variety (popping in for a pint) and wondered how they were doing. Will they survive? 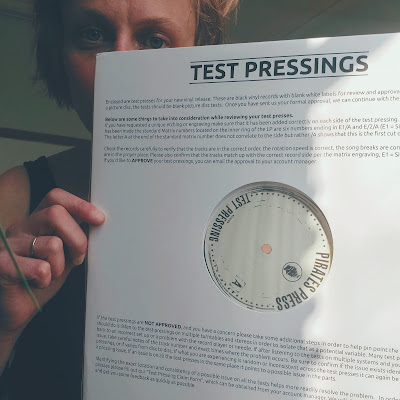 I was up to see Poster Paints, the band formed by my sister Carla during lockdown with her friend Simon Liddell. They recorded an album during that time. Test pressings (pictured above) have been received and the album will come out later this year.
Photo by Kat Gollock
Lemon Drink supported with an infectious & energetic set. Given my age, I was reminded of the sugar pop of Sleeper but with the bite of Elastica. The duelling electric guitars were beautifully raw, scratchy and catchy at all the right times. Sophie Bartholomew was dancing, twirling and almost bouncing off her band mates, clearly having fun. The band indicated that they won't be playing much for the rest of 2022 as they plan to hit the recording studio. I hope they capture some of their live energy on record.
So good I bought their t-shirt. Lemon Drink play The Hug & Pint on July 31st.
Photo by Kat Gollock
Then it was on to Poster Paints. Those that attended their 4 shows towards the end of 2021 + the 2 shows they are playing this week will have a strong sense of how good the album is going to be. Joined by friends Calum Muir (drums), Suse Bear (bass) and Kim Grant (AKA Raveloe) (bass), Poster Paints conjured mesmerising, flowing and shimmering sounds.
Liddell's guitar playing is infectious. I could listen to the riff of My Song on a loop for hours. His riffs and melodies are often simple, always with space and very often gorgeously dreamy. Just the right tinge of psychedelia with beautiful reverb.
Poster Paints just gel so naturally as a band and Carla's vocals, words and melodies fit so perfectly over the top. It was a really stunning gig.
Circus Moving On was achingly and beautifully gorgeous, Carla shook a tambourine for Number 1 and the pure pop rush of Falling Hard, and Never Saw It Coming, while Hard To Sweeten could well be my song of 2022.
It's like a lullaby, a tender & melodic vocal over sublime fragile guitar, building gently and introducing a great keyboard riff. I imagine many will fall for this gem.
I was warned of love like yours, that's hard to sweeten
But I adore a fire that burns and scars me deeper
Man of Minch joined the band for a song Ribbons, before new song Blood Orange was played for the first time, becoming an instant favourite. I mentioned My Song in previous Poster Paints reviews and above, the way this song develops into a New Order-esque dream is incredible.
There was time for a bonus cover of the Sneeze/Lemonheads song Into Your Arms, just Easton & Liddell. It was a beautiful way to end the gig.
I have heard the album and it is incredible.

Rupture
Still Got You
Number 1
Not Sorry
Falling Hard
Circus Moving On
Never Saw It Coming
Hard To Sweeten
Ribbons (featuring Man of Minch)
Blood Orange
My Song
Into Your Arms (Sneeze/Lemonheads cover)
Photo by Kat Gollock
Posted by everythingflows at 08:34