Earlier this week Teenage Fanclub released a video for new song I Left A Light On. I needed it. I had the Monday blues after watching the news the previous night. The utterly horrific events taking place in Ukraine chilled my bones and my heart.

Escaping from reality into a 3.5 minutes of melancholic pop music was just what I needed it. I must have. I played it half a dozen times in a row. The warmth of Norman's voice, the harmonies with Euros, the guitars, the piano at the centre of the song, the strings ... beautiful. Quite Lennon-esque.

You know I left a light on

I left it on for you

And I think I needed a night out too.

Then on Tuesday I finished work at 11am as I suddenly felt shattered and spent the rest of the day in bed. I was testing negative but was convinced COVID was in the pipeline. The sleep must have worked, as I woke up feeling fresh on Wednesday morning and returned a couple of negative LTF's through the day. I was going to the gig after all. 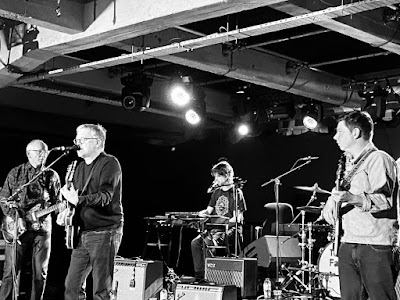 All my life I felt so uptight

No it's all alright

While the gig is fresh in my mind I have to mention a few highlights. In fact, rather than run through the gig song by song, I'm just going to go with 10 highlights off the top off my head.

I'll start with Raymond's My Uptight Life. Oooofffftt the closing refrain brought tears to my eyes as the band faded out to leave just Raymond and Norman singing over Raymond's guitar. And then the crowd came in to sing with them a few times. It was a really beautiful moment.

Another highlight? Norman leading the band through I'm In Love in record time. Every time I see the band play this song they seem to be on a mission to take a second or two off the length, tearing through it and making it all the more electrifying.

OK well the whole gig made me smile and escape reality for a while. And any worries of the band being rusty after a number of months off were banished very early on as the band ripped through Warm Embrace and jammed gloriously on Home.

And I must mention the young teenager and his Dad to my left, centre stage, just a couple of rows from the front. The young guy had a Pretty Green jacket that he took off to display a Fred Perry top. They were having a great time together and it really made me smile to see a true teenager in the Teenage Fanclub Fanclub!

The run of About You, Start Again and Alcoholiday was incredible, warm guitar sounds washed over the audience

Norman xylophone was greeted like a long lost friend for Raymond's beautiful Your Love Is The Place Where I Come From. A truly beautiful song. As is Only With You.

Back In The Day is a real favourite from Endless Arcade and is it just me or does the closing section of The Concept get better every time I hear it?

John McCusker and Stu Kidd joined the band onstage for the beautiful new ballad I Left A Light On, although their sound could have been turned up a notch or two. It's a promising sign that the band are writing, recording and releasing new music. A new album next year?

There was sadly no room for Raymond's Can't Feel My Soul due to a strict curfew but Everything Flows was played with zip, zest and warm smile on stage and off.

Special shout out to Stephen Black who played bass in place of Dave due to re-re-rescheduling conflicts. He was super solid. As for the rest of the band, Raymond seemed to be really enjoying himself, Norman was smiling throughout, Euros has brought so much to the band and Francis was in top form, particularly on Warm Embrace and I'm In Love as he drove the band on at pace.

A great night from a band in brilliant form. 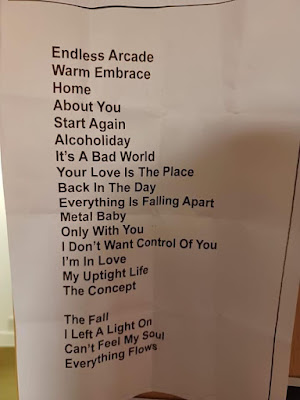 Thanks Murray, sounds like a great night...we need some positivity and smiles right now.
I can't wait to see them in Portsmouth in a couple of weeks time

Enjoy, they are in great form and I really enjoyed escaping the realities of life in 2022 for a couple of hours.