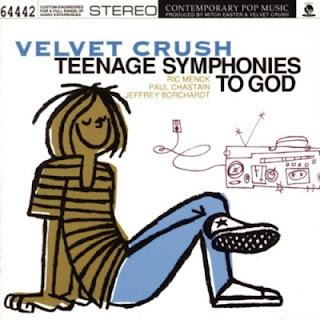 Back in the 1960's, an acid fried Brian Wilson described the songs he was writing for his Smile project as "teenage symphonies to God". Quite a description! I'm kind of amazed that it took until 1994 for a band to steal the phrase for an album title.

The band in question was Velvet Crush, from Providence, Rhode Island. Formed by Paul Chastain vocals/bass and  Rick Menck on vocals/drums, the two had played in bands through the 80's before forming Velvet Crush. On Teenage Symphonies To God they were joined by Jeffrey Borchardt on guitar. 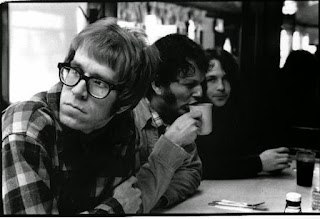 Velvet Crush signed to Creation Records in the UK, perhaps aided by a cover version of Teenage Fanclub's Everything Flows as an extra track on their 1991 CD single Ash & Earth.

Chastain and Menck's Teenage Symphonies To God are not as complex as the arrangements Wilson was working on all these years ago. Their symphonies are like the ones thousands of American kids blasted out in garages and basements throughout the country - guitar(s), bass, drums - power pop.

Lord knows what happened to my CD copy of it. I always loved the artwork - super cool. And it has been great to listen back to the songs - full of hooks, harmonies and warm guitars. If Teenage Fanclub were influenced by Big Star around this time, then Velvet Crush sound like Big Star.

Opening with Hold Me Up, you're immediately into the sun soaked world of Velvet Crush and it's a rather lovely place to be, particularly at time when it gets dark around 4pm and every time you turn on the news you don't know what will be coming next.

Velvet Crush can rock out/jam on, beautifully demonstrated on their cover of Matthew Sweet's Something's Gotta Give, where they sounds like a dream band you could discover playing in your local bar.

They can bring it down too, #10 is absolutely beautiful. A different kind of Big Star. And then you have the likes of Weird Summer and Time Wraps Around You, both full of harmonies and chiming Byrds-esque guitar, sounding and feeling wonderful.

Speaking of The Byrds, Velvet Crush cover Why Not Your Baby by Gene Clark, their harmonies at their peak, a variety of guitar sounds colliding to sound glorious.

Star Trip is possibly my favourite song on the album. Sun kissed and dreamy guitar sounds and melodies.

I'm on a dream cloud

Higher than the sun but I'm coming down

From my dream, my dream cloud

I shot for the stars but I hit the ground

I can't feel it, it feels alright

Overall, Teenage Symphonies To God has a lovely waves of warm guitar sound and an infectious sense of energy. I've really enjoyed listening to the album again and I hope you do too. Or if you decide to check it out for the first time then let me know what you think. 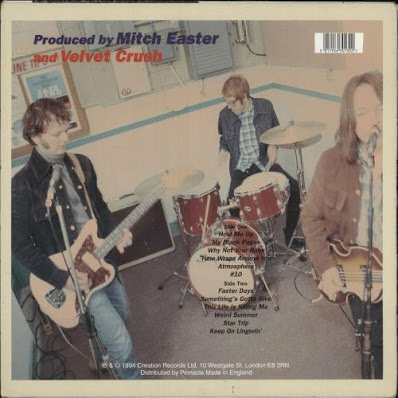 I've always been aware of this album (partly on account of the great artwork, as you mentioned), but never really listened to it. Thanks for the reminder, it sounds really fresh and joyous in the kitchen right now. Cheers.

Thanks so much Andy