In the lead up to this show I had multiple debates with myself; I was going 100% its Tim at Tuts! I wasn't going - Tuts is tiny, there is no ventilation + it's sold out and will be rammed, COVID central! I'm double vaccinated I am going 100% it's Tim at Tuts! Repeat to fade.

Music + the chance to see one of my favourite singers in one of my all-time favourite venues + kind of an opportunity to say thanks to a lockdown hero for the listening parties over the last 18-month, won over. I was going. Lockdown is over, COVID isn't going anywhere, but the vaccination is really working, time to put it to the test.

Burgess, as always, has been a busy bee. Along with raising spirits, smiles and highlighting all kinds of artists and albums with his listening parties (check his incredible new book), he released his album I Love The New Sky on Bella Union.

The album grew on me, it's definitely one that I had to step away from and come back to in order to fully appreciate the songwriting, style and substance within the record. I think there was just so much going on in May last year. I know I wasn't the only music fan to find themselves listening to lots of old music rather than new releases, when the world was stopping and changing in front of our eyes, I was seeking something familiar.

Anyway, back to King Tuts. 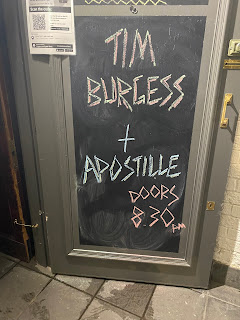 I enjoyed the walk from Central Station. Glasgow city centre was eerily quiet, the shadows of the beautiful old buildings on St Vincent Street loomed over me. Always remember to look up in Glasgow, we are blessed with some stunning old architecture.
Grabbing a beer in the downstairs bar, the doors soon opened and I made my way up the famous stairs to the venue section of King Tuts, walking up the other half dozen stairs to take my usual place behind the sound desk. It felt good to be back and it was lovely to soon be joined by friends Duglas and Jim, two people I would normally see quite regularly out and about at gigs, but not for a long time. 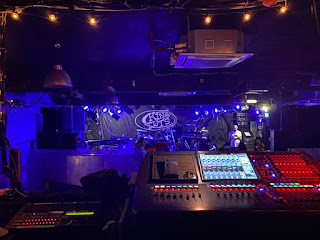 Tim actively encourages fans to get along to his shows in time for support acts, so it was pleasing to see Tuts pretty busy for Apostille, AKA Michael Kasparis, head honcho of Night School Records and part of the fab team at Monorail Music.
Michael took to the stage, standing behind a bank of equipment; a synth, a sampler and (for later) his phone. Turning knobs and pressing buttons, Apostille layered beats on beats, screaming over the top before introducing synths and finally singing - coming on little Ezra Furman in terms of the speed and passion his words came out. The song may be called Natural Angel, I really enjoyed it.
Michael, normally pretty quiet and mild mannered when I see him in Monorail, was completely the opposite as Apostille. 'Are you all glad to be back at live music ... after me?' was a nice little joke to further break the ice with the crowd.
Then there was a moment where Michael's phone buzzed in front of him just as he was introducing a song. It was his Dad. 'Dad, I'm playing a gig', Michael then held his phone to his mic so the crowd could hear his Dad say 'oh enjoy it, I hope it goes well', 'No. I'm playing a gig right now! Everyone say 'hi dad''. The audience responded and Michael's Dad wished everyone well. It was a funny and lovely heartwarming moment, the kind of thing I've really missed.
Michael played a very enjoyable set, shaking his head like Animal from The Muppets, getting lost in his beats, moving around the stage, like Freddie Mercury in Dave Grohl's body (a compliment). Great fun. I can only imagine the energy Apostille would generate from a headline show!
Towards the end Michael gave his mobile number out and said he would happily act as a dating service for fans at his gig. Someone sent a message and it was really was his number, so Michael read it out. New fans were easily won. 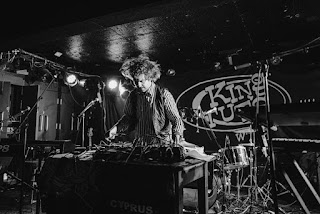 Photo by Murray McMillan
One of the odd things about last night was that there was no music playing in between acts. I assume this is to stop people talking loudly over the top of it, part of the new rules and regulations we have to live with. I missed it. Tim or The Charlatans usually play cool tunes before they come on. I missed the lights dimming, the buzz and anticipation of an act coming on stage and the entrance music they chose.
So, at 10pm Tim and his band just casually wandered on to the stage to a huge cheer and cries of 'I love you Tim', of which there were plenty through the show. Dressed in a white t-shirt, blue dungarees and with his bleached blonde moptop, Tim could probably pass for someone in their mid-30's, he is ageing well and looking well. 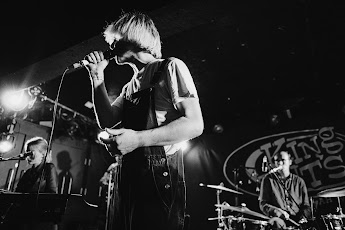 Photo by Murray McMillan
Fronting a 6-piece band; drums, bass, guitar, violin and 2 on synths/keys, Burgess engaged well with the crowd during and between songs, dancing, raising his arms aloft and posing for photos when he spotted a phone pointing in his direction. In general, he looked like he was having the time of his life.
Empathy For The Devil was beautifully delivered, The Mall was super dreamy, new song Curiosity was blistering fast paced and full of energy, Yours, To Be was utterly gorgeous and tender, possibly my song of the night. Taken from the Ascent of the Ascended EP that Tim released hot on the heels of the I Love The New Sky album, Yours, To Be is Burgess at his melodic, romantic best.
Sunday morning, unconsciously conscious,
In the backseat of the car
Windows wound down, my arm around you,
Feeling like a superstar
Oh what a feelin'
To be yours

Tim only played one song from his own solo back catalogue, the sunshine pop of Oh My Corazon, which found me punching the sky and singing-a-long. I'll be revisiting Tim's excellent I Believe album through the week. Released back in 2003, a vinyl reissue would be welcome for the 20th anniversary in a couple of years time.

Laurie was another gem from last night, the hook we have friends in other dimensions, they come with the sweetest intentions, suspended in dreams and beautiful things really stood out for me.

Tim and co didn't bother leaving the stage for an encore as they wanted to play two more songs rather than one. Starting with I Got This, the encore upped the pace a little, both songs were more funky, they just had that little more edge to the dreamier songs played earlier, the band had worked the setlist really well.

For the closer Tim led his band into a funky jam that gradually became The Charlatans classic, The Only One I Know. The pace and the funk didn't let up, it was an outsanding version and I captured the first part of it on video until I put my phone down to dance.

Everyone has been burned before

Everybody knows the pain

The lyrics seem to mature and take on even more meaning with every passing year. It's crazy to think how young Tim was when he wrote them all those years ago. Soulful, deep and euphoric.

I look forward to seeing Tim again soon when he is back up at the end of the month to play the FRETS Collective nights in the Strathaven Hotel with his friends Norman Blake and Duglas T Stewart.

If you enjoyed this blog, you might like THIS ONE on my 10 favourite songs by The Charlatans. 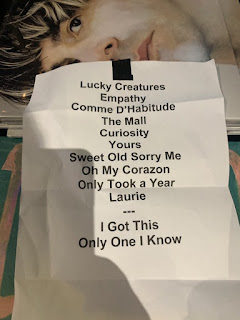