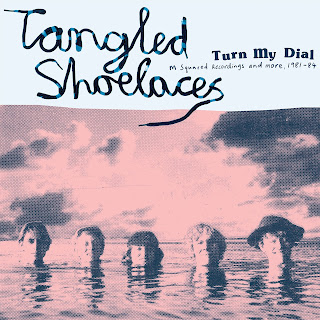 The innocence, the joy, the experimentation, the freedom, the melodies and brilliant raw pop music created by this young band from Brisbane warmed my heart.

Tangled Shoelaces formed in 1980 in Brisbane, Australia, Tangled Shoelaces were aged between 10-14, centred around siblings Stephen, Lucy and Martin Mackerras, with their friend and neighbour Leigh Nelson on drums

After falling for the album, that I discovered through the brilliant Monorail e-newsletter, and then blogging on it, I sent a speculative email off to the band to see if they would be up for an interview.

I was thrilled that Stephen replied to say he would be delighted to answer some questions and his brother Martin would also get involved.

So read on for memories of gigs, the future generation, the 'reunion' gig, other music they have recorded under different guises and plans for what sounds like an incredible album with loads of choirs - if the title is anything to go by!

EF - There are three siblings in the band. Can you remember what kind of music your parents would play in the house when you were kids? how important were your parents in encouraging you all to pick up instruments and play?

S - Very important! Dad is still a member of the Australian Wagner Society and Mum (who recently passed away) loved Joan Baez and Peter Seeger. They both loved and shared classical music with all of us. Leigh's father was also very influential. He was a professional Jazz drummer in Brisbane in the early 1960's. He was very helpful with our original songs, giving us advice about song structure and key changes that made our songs sound more polished.

Both Mr Nelson and Mum in particular encouraged our musicianship by taking us to lessons, buying instruments and coming to see us play. Lucy and Martin learnt classical music and joined the youth orchestra. Martin ended up going to the conservatorium and is a professional music teacher and prolific composer today. His band is called Maya Dreamers.

M - Yes we always heard music coming from Dad's study. When I said I wanted to learn clarinet he immediately said we will get you a clarinet and start lessons! 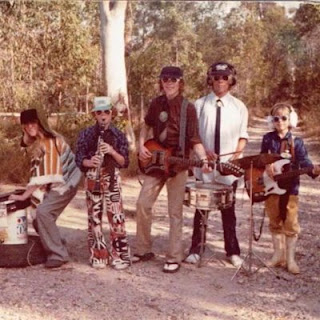 EF - I love how you focused on writing and playing your own songs. Did you ever play any cover versions?

S - We were all very keen to be creative songwriters. Martin and I both wrote the songs, but Lucy and Leigh made very important contributions. Lucy's vocals made the songs so much better and Leigh's excellent drumming made the songs move to the groove. But yes, we loved music and we did covers of bands we admired like The Fall and Joy Division.

M - Ha ha! Yes, don't forget we also did a cover of AC/DC's You Shook Me All Night Long. Leigh wanted to do that so he sang it as well! Also Buzzcocks Hollow Inside which I had completely forgotten about until it was mentioned in another interview and then I remembered playing like it was yesterday! The big one which always got the crowd cheering was when Lucy sang Roxanne by The Police. I'm sure we learnt a lot from playing covers. 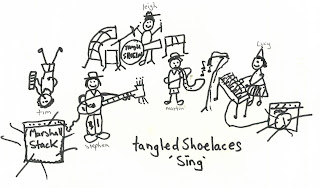 EF - I hear elements of New Order in the likes of World and Oceans Away, what kind of music were you listening to as the band developed? Would you say you had any specific influences?

S - Oh yes, we loved Joy Division, New Order and all of those Factory bands. Also some Scottish bands like Altered Images. But we also loved local bands like The Go-Betweens and The Church. We went to see a lot of live bands both touring and local Brisbane bands. We also listened to a lot of ABBA and A LOT of classical music, especially Stravinsky and Phillip Glass.

M - Yes I remember being obsessed with Joy Division and New Order. I always remember going to see bands with Stephen.

EF - As someone who also has a brother and sister, how was the sibling rivalry during the years of the band? Did the band and music help prevent you from fighting?

S - At that time we were very close and co-operated a lot. We had a shared musicality and a dream that we could create and perform our own songs. Playing in pubs & clubs and going down to Sydney to record with M-Squared Records, wow! That was fun!!! We were having a great time, so we bonded and became very close.

To this day, Martin and I are very close, especially through our music. Lucy now lives in New York, so we don't see her as much.

M - I don't recall any sibling rivalry at all. We just got on and played the music! There was always a sense of co-operation and shared purpose. 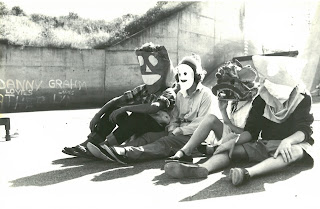 EF - As you reflected back on the band and listened to the songs and recordings for this album, what was going through your mind? Do you have any favourite songs? Is there any you would like to re-record?

S- For decades the songs on the LP existed only as MP3 files on my computer. The release of this record has allowed us all to reminisce and even re-live that exciting time. So, a big thank you must go to Guy Blackman from Chapter Music for seeing the potential. I was surprised that he wanted to put the record out in the first place. I really thought those songs were relics of the past that would never see the light of day! I'm glad to be proven wrong!

M - Yes, i felt the same and it was amazing to hear all the songs remastered etc. I especially love the really early ones I Need A Stamp and Little Bear after not hearing them for so many years. My other big favourite is Giant Rabbits because it shows such maturity and depth of feeling.

S- Thanks Martin - Political Jokes is a gem! You were only 10 when you wrote that!!! 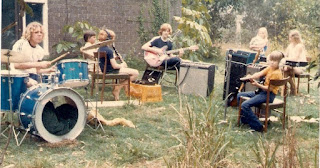 EF - What can you remember about playing live as Tangled Shoelaces? What kind of reaction did you get from people?

S- All I can remember was having lots of fun. It was great to be sharing it all with Lucy and Martin and Leigh was such a good drummer. People seem to like us, I guess because we were so young. But I think the songs were OK. We were always writing new songs and experimenting with our sound. It was a really exciting time.

M - We got really good reactions. At first people were just so surprised! But we did play some gigs later on which were pretty average. I remember once being offended because everyone was out on the balcony when we played and then they all came in when the next band was on!

EF - And I believe you have a show coming up at the start of October! How are you feeling about it?

S - To be honest, I'm a little nervous about it! Martin lives in Melbourne and Lucy in New York. So, Leigh and I have got together with his 10 year old son who is a very talented drummer - like his Dad. We are now playing as a three piece. The gig you mentioned is our first performance ever in 40-years. On 2nd October. We'll video it and put it out on YouTube. Martin, Leigh and I got together earlier this year to do a promo of Movies. WATCH HERE.

I was hoping they'd carry on the band name and songs into their generation, but they said they weren't interested. Oh well! 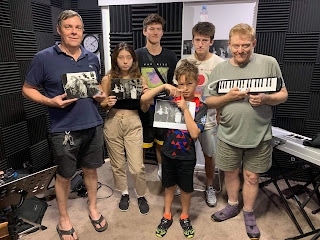 EF - Do you have any plans after this? Have you got any other unrecorded songs you'd like to go into the studio with?

S-  Ummmm. Let's see. I hope we can get more gigs. We do have new songs but we'll release them on our own, not as Tangled Shoelaces.

EF - Lastly, what have been your musical highlights after Tangled Shoelaces finished?

S - Interesting question - after TS, Martin and I formed another band called Wondrous Fair. We were a psychedelic folk-pop-jazz band and we continued the exploration of creative songwriting to its limits in that band with three other brilliant musicians. We played, performed and recorded music for about 10-years. Inspired by the interest generated by Tangled Shoelaces - Turn My Dial, we have an album coming out next May called Spirals. I hope we can sell some in Monorail where you discovered Tangled Shoelaces and you might be interested in having a listen. Like all independent music, it'll be on Bandcamp.

M - Yes I'm very excited to hear the Wondrous Fair album! We made some really experimental music but always with a great spirit of fun. We were all in our late teens or early twenties, playing at parties and having a great time.

As Stephen mentioned, I have my own band called Maya Dreamer. We have made 2 albums so far and I;m working on a third called Maya dreamer and the Future Happiness Orchestra featuring the Choir of Light. It has a lot of choirs in it! Sadly, very much delayed due to lockdowns.

I've played clarinet with many other artists, but making my own music has been the biggest highlight for me. It's a very different kind of songwriting, but I've tried to follow in the spirit of Tangled Shoelaces and Wondrous Fair. 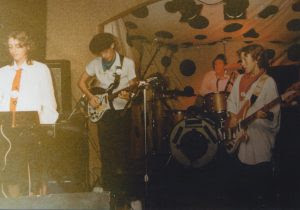