Poster Paints at the Poetry Club 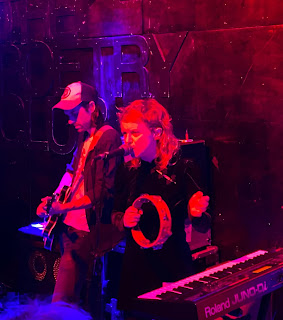 God it's so good to be back at gigs. 4 in under a month. Each time I have felt elated from the sounds, the company, the atmosphere, the venues, the little moments of magic, the banter ...

Through the course of the 4 gigs I've gone from grand (Assembly Rooms) to larger and legendary (Barrowland) to pretty small and legendary (King Tuts) to super cool and intimate - The Poetry Club.

Owned by the artist Jim Lambie, the capacity of The Poetry Club (situated through a blink and you'll miss it door next to SWG3 in an old railway arch) is a mere 120, You walk into a small bar area with a couple of Lambie designs on the walls, then through the to gig venue that somehow incorporates a little balcony due to the high ceilings.

Support on the night was a solo set by Broken Chanter, AKA David MacGregor. In the intimate setting I grew to appreciate his guitar playing and style, songwriting and storytelling, all the more. Should We Be Dancing? from his eponymous 2019 debut album is a gem of a song, as is Don't Move To Denmark which was my favourite of MacGregor's songs on the night, he really got into a flow at the end, repeating the a glorious chorus over and over.

don't move to Denmark, don't stay on my behalf,

the brass on my neck made you laugh all night, all night

what if you stay and I disappoint

thoughts like this keep me up all night, all night 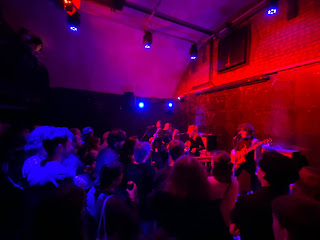 On to Poster Paints, their first headline show after 3 support slots with Teenage Fanclub last month. This time they had their own teenage fanclub with a number of cool young kids standing to my right.

The band played beautifully, full of confidence, unafraid to play slower songs that built, but also playing faster paced songs like their two singles to date; Never Saw It Coming and Number 1. Fall Hard could well be a candidate for single number 3, while the closer My Song is fast becoming a favourite, the way the song develops after a couple of minutes, with new layers being added, the pace picking up, New Order style synths being introduced and the hypnotic guitar riff just keeps playing, backing vocals come in ... sublime. Might be too long to be a single, but for a gig and album closer - perfect!

I gave you the chance to have and to hold me

It turns out, that I got it wrong

Poster Paints invited Broken Chanter up on stage to sing a song called Ribbons in place of Lomond Campbell who co-wrote the song, due to Campbell living in the Highlands. The dreamy psychedelic, reverb-y guitars were sublime. Carla came in to sing the chorus - a gorgeous song.

The song that melted my heart, probably most hearts in the room, was a beautiful ballad called Hard to Sweeten. Callum on drums switched to a mellatron, while the band delivered gentle chords and riffs, while Carla's voice was crystal clear;

But I adore a fire that burns

That scars me deeper

A beautiful song, it sounded instantly classic, a beautiful gig. I look forward to seeing what Poster Paints do next. 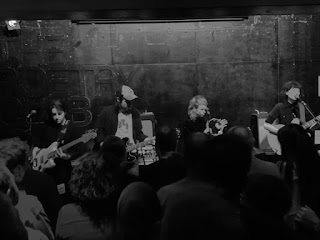 When i read your article, i notify that you write this post perfectly. I am enjoying to reading this article. Thank you So much to share such a great art of writing.