I have recorded a few podcasts over the years. You'll find 5 of them on mixcloud, including an interview with Duglas T Stewart to celebrate the 30th anniversary of BMX Bandits.

Over the last year I've really enjoyed a number of zoom calls with fellow music fans and on a couple of occasions I had the thought 'this would make a good podcast'.

Yet I never did anything about it until I received an email from Bobby Bluebell. I had emailed Bobby some questions with the intention of writing a feature blog on the reissue of The Bluebells Sisters album on the Past Night From Glasgow label.

Bobby replied but he had recorded his answers rather than type them out. I thoroughly enjoyed listening to Bobby talk really openly, warmly and passionately about music; from fanzine culture, imaginary bands that he made up that led to him writing a song, the formation of The Bluebells, the Glasgow music scene, writing and future plans.

So because I enjoyed it and because I thought 'this is going to take ages to transcribe!' I asked Bobby if I could turn it into a podcast. I still intend to finish my blog on Sisters!

I now intend to record bi-monthly podcasts with fellow music fans, bands, artists, managers, promoters, DJ's ... the podcast will be people who love music, talking about music. It's kind of Bobby Bluebells fault!

My podcast site is HERE and on Spotify

Here is a little bit more about episode 1. 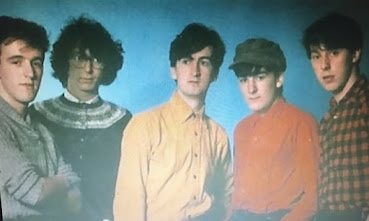 The Bluebells, Bobby second from left

For many, many years I would see someone cutting about Glasgow with unruly curly hair, big thick cool glasses, a duffel coat (quite regularly) and turn up jeans. I would see this guy at loads of gigs.

Eventually we met when my friend Stephen Watt held a launch party for his book MCSTAPE and it finally dawned on me that this was Bobby Bluebell from The Bluebells.

We'd messaged each other on Twitter a few times about music and Oriel Records, but I didn't know what he currently looked like!

Bobby was open, energetic and very friendly, qualities I'm sure that most people that have had the pleasure of his company would highlight if asked about him.

Last year I was delighted to finally hear The Bluebells Sisters album when it was lovingly reissued on Past Night From Glasgow and I was really hoping that I'd see The Bluebells play in my hometown of Uddingston at the second annual music festival that was scheduled for September.

I'm writing a blog on Sisters. It's taken longer than anticipated as I wanted to live with the album for a bit before writing about it.

To accompany my review of Sisters, I asked Bobby if I could interview him. Upon sending through a few questions, Bobby replied with an audio recording that I intended to transcribe into a blog.

However, I think it is lovely to hear directly from Bobby himself,

Early gigs, hanging out at clubs and gigs in Glasgow, friendships, the reissue of Sisters, gigs and new Bluebells material?

1. How did The Bluebells form as a band?

2. Was there an early song that you wrote and performed when you thought 'yeah we have something'?

3. Were you intentionally working towards an album (that became Sisters)? You had released a number of singles and an EP beforehand.

4. What was the Glasgow scene like for you back then? Who did you admire and who did you hang out with?

5) What was it like being in The Bluebells back in the 80's? You seemed to just get on with everyone (which still seems to be the case). How did you get on when you ventured south?

6) How much have you enjoyed the remastering and reissue process? What memories did it bring back?

7) When was the last time you had listened to the album before the reissue process started?

8) What do you think of the album now?

9) What do you think of the current Glasgow scene? You and some of your contemporaries like Stephen Pastel are still very active and encouraging of new artists.

10) Do you hope to take the album on tour post lockdown/restrictions?

11) Will The Bluebells write and release new material?

SEARCH FOR BOBBY BLUEBELL INTERVIEW ON SPOTIFY OR CLICK HERE