I usually write a blog on what I'm looking forward to from the Scottish music scene in the year ahead. It's kind of difficult this year as we entered 2021 buoyed by news of vaccines being rolled out and approved, balanced against a new strain of the virus and steadily rising numbers. I'm all for the new strict lockdown to get some kind of control back.

Music helps, it always does. #timstwitterlisteningparty for The Pastels & Tenniscoats Two Sunsets album on 2nd January, swiftly followed by Love's classic Forever Changes was just what I needed to relax and escape from reality for a while.

And music fills me with optimism.

Can you imagine the atmosphere at the first gigs? It might be slightly weird at first, but just wait until the first big song is played and people go crazy, dancing, jumping, punching the air, singing a long, hugging friends and getting lost in music.

Imagine the first club nights, surely all the DJ's will just be absolutely going for it and playing the songs they know will get the best response on the dancefloor. It will be wild. My clubbing days are largely over but I have fantasised about going to the Sub Club, or downstairs in The Admiral or a night at Mono. I certainly intend to go to McChuills one night.

Despite the incredible challenges that everyone has faced for almost a year, Glasgow and Scotland has found a way to keep spirits alive, to give music fans hope, to keep the community spirit alive, to even give us things to stick in the calendar to look forward to, some with blind optimism, other shows where there is a real possibility that they could be the first post lockdown/restrictions shows ... imagine the atmosphere ... 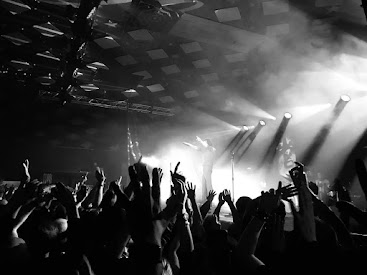 Artists have released, created and played online shows, labels have displayed resilience, belief and creativity to put music out when bands can't play/tour to promote, stores like Monorail have adapted to a hybrid of online and store openings when allowed, promoters are booking and music fans are showing real support by buying records, cd's, donating to crowdfunders and by buying tickets.

Will everything that we know still be there when the city of Glasgow begins to open again? The Barrowland, The Hydro, King Tuts, Broadcast, Sub Club, Sleazys, The Hug & Pint, the CCA, Mono, Stereo, The Old Hairdressers and The Admiral?

Venues where I have spent some of the happiest nights of my life, venues that support so many Scottish acts, venues that bring artists from all over the world to Glasgow, a city that wins the hearts of bands, artists and fans that visit and experience the Barrowland roar and a Glasgow crowd going for it. 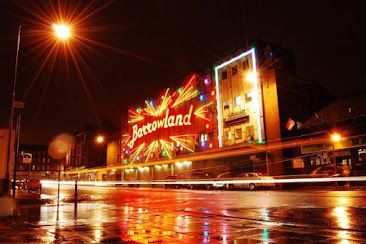 So far, at least to my knowledge, all those venues are OK. Some have held crowdfunders to give them the safety net they need to stay open, others (like the Barrowland for example) are probably safe because they know that should the need arise, they would receive exceptional support from a crowdfunder to guarantee they stay open.

With my fundraising experience and love of music, I'd just like to say that if the Barrowland ever wanted to discuss a crowdfunder, or to start a trust to guarantee the long term future of the venue, then I would be delighted to offer my support.

I'm looking forward to revisiting venues across Glasgow, to sharing beers and experiences with friends, to discovering new music, to singing-a-long to my favourite songs and bands, to dancing without a care in the world .... to so much.

I can't wait to hear from friends who play in bands, who work in venues, or who book and put on shows when they are back to doing what they do best. Mostly, I hope that resilience displayed across the Scottish Music Scene is rewarded with brilliant music and nights out.

The new Teenage Fanclub album, Endless Arcade, will be released in April. I doubt their shows scheduled for that month will go ahead as planned, but I can't wait to see the band live again when it is safe.

Raymond's Everything Is Falling Apart and Norman's Home have been released as singles, the band sound relaxed and on form. 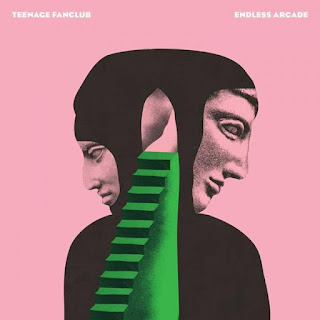 TeenCanteen will be releasing their first recordings This Is Where It Starts on LNFG's Hive imprint. 8 songs were recorded after only 5 practice sessions. Described by the band as our real debut album.

There will be the original versions of How We Met (Cherry Pie) and Friends, plus 6 other songs including the stunning Under My Cover with Duglas T Stewart. Expect raw pop full of hooks and harmonies. 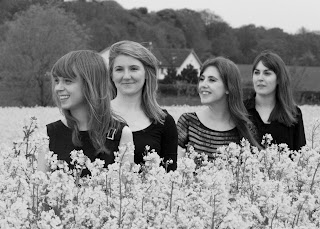 Underworld, James, Colonel Mustard and the Dijon 5, Chic, Martha Reeves and the Vandellas, Craig Charles & Neneh Cherry (I think I'll only be going 2 nights out of 3) but also Kraftwerk in 3D which is amazing, I caught them in 3D at T in the Park a number of years ago. This is a sensational festival line-up! The kids will hopefully be going to my Mum's this weekend!

Set in Rouken Glen Park, this is an ambitious line-up for The Playground Festival and I sincerely hope the promoters are rewarded with a sell out and I reeeeeaaaaalllllly hope it goes ahead. What a party it will be! 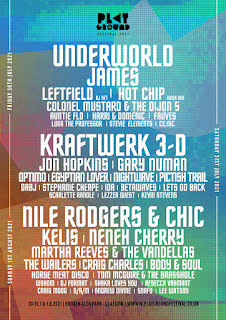 Speaking of kids and festivals, we really fancy Doune The Rabbit Hole in July. I'm pretty sure the kids would love Stanley Odd, Sacred Paws and Free Love. Would they stay up for the headliners though?! An important question if taking kids to a festival.

A brand new band who haven't released anything and have barely been in the same room as each other!

Through lockdown my sister has been working with her friend Simon Liddell on a new project - Poster Paints. Simon has been writing, recording and sending music to Carla to write lyrics and melodies for. They've invited contributions from other friends too. I love the songs I have heard and hope they can maybe release a couple of singles and play some shows in 2021. The album is coming together nicely.

6. The continuing development of Last Night From Glasgow

I recently caught up with Ian Smith who runs LNFG. Ian's energy and enthusiasm are infectious and what he has done with LNFG  since forming back in 2016 has been nothing short of staggering. The label will be releasing loads of quality vinyl through 2021 and are champing at the bit to put on live shows again, with many plans up their sleeves.

The addition of Past Night From Glasgow as a re-issues label is one that many of my generation will welcome; the debut release of The Bluebells Sister was stunning and the label are set to work magic on BMX Bandits and The Trashcan Sinatras in 2021. I look forward to them shining the light on other Scottish classics.

I love the Scottish Album of the Year Award, it's such a welcome addition to the Scottish Music Scene. I think it's time to take it to the next level though. 2020 was tough, but the virtual ceremony went horribly wrong, it should have been better. They know that and no-one will be more disappointed than the team involved.

Where I think there is room for improvement, is how the SAY Award links to the wider musical world throughout the year, not just from launch of submissions to the award ceremony.

Just skim through some of the end of year lists from The Guardian, Drowned In Sound, Piccadilly Records, blogs .... where are the Scottish artists? How many of the 2020 longlisted albums made any end of year lists in either 2019/2020?

Does that matter? Yes & no. Music is a matter of taste, but Scottish artists (many operating on a shoestring) can only make end of year lists and go wider than Scotland with help. Could the SAY Award and Creative Scotland do more for our artists through the year?

Difficult question and there is no easy answer. Just throwing it out there though as one of the best things about the SAY Award is that it encourages healthy debate.

Of course Creative Scotland help a lot of our artists with grants, but there could be some low cost solutions to do more;

- More productive use of  SAY Award social media through the year

- A monthly press release to media about the best Scottish albums, also looking at what is coming next

- Quarterly round ups about the best albums/reviews

Should be easy and cost effective to get going. 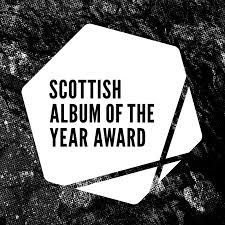 8. FRETS and more trips to Strathaven

Douglas MacIntyre was in the process of putting Strathaven on the Scottish musical map through his monthly FRETS Creative nights at the Strathaven Hotel.

The intimate seated setting for acoustic/stripped back shows was attracting some fantastic artists like James Grant and Norman Blake, while a host of shows were lined up throughout 2020.

Tim Burgess, Roddy Woomble, The Bluebells, Robert Forster and King Creosote are just some of the artists lined up to travel to the lovely town of Strathaven once restrictions are lifted.

I hope to be running an interview with Douglas in the near future. 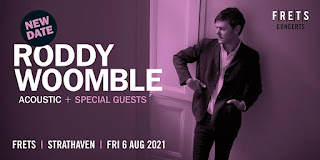 The beautiful setting of the Kelvingrove Bandstand has provided many memorable nights since it reopened back in the summer of 2014. I was really looking forward to seeing Edwyn Collins, Primal Scream and The Jesus and Mary Chain back in summer 2020. I really hope they will be able to play in summer 2021, will the fact that this is an outdoor venue help? Social distancing isn't an option at sold out shows, so that might effect things if the vaccine is still being rolled out. But what if numbers are exceptionally low? Could we then see Bandstand shows stretch beyond their normal run into September and even October? 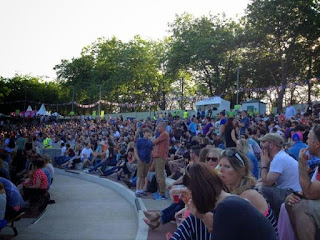 10. Colonel Mustard and the Dijon 5

One band our whole house has fallen for is Colonel Mustard and the Dijon 5. Lovely people, a completely unique band and one of the best live musical experiences you will ever experience. Their 2020 show at the Old Fruitmarket brought joy to my life and a huge smile to my face.

I really hope that they get to play a big show and put on a huge crazy party once we get through this. We will all be there when they do to dance like nobody's watching.

Look out for an interview with the Colonel John McMustard in the near future. 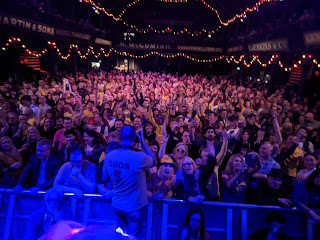 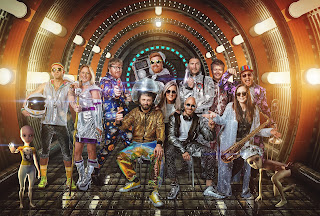 Thanks for the new year update. Lots to look forward to, music keeps us optimistic! Here's to a better year ahead and happy new year to you, keep up the great work. Cheers, David (Songs Of Your Life on Twitter)