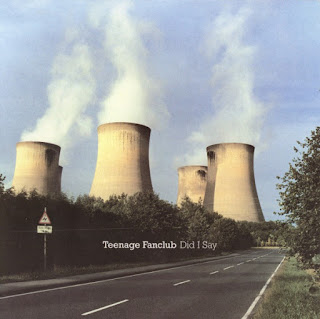 Norman Blake's Did I Say,  was released on Teenage Fanclub's Four Thousand Seven Hundred And Sixty Six Seconds greatest hits/best of compilation from 2003. A limited edition 7-inch was also released.

Did I Say is a song that Norman was rightly proud of from the off. I remember catching Norman playing a show with David Scott in Blackfrairs in the Merchant City of Glasgow. The audience literally sat around Norman's feet as he played a beautiful acoustic set of Fanclub favourites and choice covers. I always remember that particular performance of Did I Say, the response was just incredible; smiles, jaws dropping ... to hear such a beautiful song by its author in such an intimate setting was a real joy. We knew Norman was good, but this was special!

Norman, in my opinion, has written a number of absolute masterpieces over the years. I consider Did I Say to be one of his very best.

Opening with Norman singing over a piano, the band crash in beautifully after the line no you don't have to travel alone, the beat is almost Motown-esque, there is a guitar chiming. Listen on headphones and you'll get a really rich experience.

Strings come in, you can hear the sound of someone moving up their fretboard at 1 minute 18, the beat kicks harder at 1-minute 30 as Blake sings of the sun beating down.

The instrumental section, beginning with a delightful roll of the drums; has strings soaring, there is a glockenspiel in there, a beautiful riff being picked on guitar and it is the sound of a band in full flow, playing and gelling perfectly. The melody flows so naturally throughout Did I Say, it's such a gorgeous song.

Throughout, Norman sings like an angel. There are times I've caught him playing solo when I've looked around to see who he is harmonising with. And there is no-one there, his voice is just that good, that beautiful.

In previous Teenage Fanclub blogs I have mentioned the Teenage Fanclub Fanclub, a community that originated on the forum section of the bands website before modernising on a Facebook Group. I've met fellow fans from across the world via the group, arranging meet ups before Glasgow shows and also when I have travelled further afield.

I thought I would ask them for their thoughts and memories on Did I Say. There are 3 videos at the end of the blog; the studio version, Norman solo in Oslo and a performance from the Creation Years tour.

Thanks to everyone for contributing. 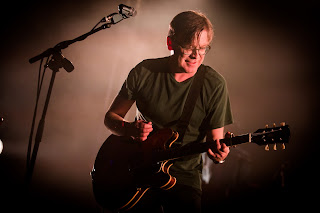 I remember upon first hearing it and thinking it was subtly romantic and beautiful and then trying to play it and finding the rhythm changes at different times totally confusing me.

So while Norman sings this beautiful love song, with a sweet melancholy element, my version is a spluttering tune with confusion and twisty fingers!

Hey, did I say, that I smiled when I first hear your name is a wonderful romantic line that wouldn't be out of place in one of Jimmy Webb's finest.

I love that line too, especially when it goes to fell in love, and I still feel the same way now - blub central!!!! Such a fantastic song.

Live - the almost whispered first few lines with Norman and Gerry harmonising used to give me goosebumps.

I wished he'd written it when I was in the band. It's an absolutely amazing song. Incredible songwriting by a master of his art.

It's on my running playlist. Running through the hills in a groove with no people in sight with that song playing is rather transcendental.

I love the way that it is a hugely emotional song, yet without the lyric being that specific; it's also completely cliche free. We don't know exactly what he's singing about, but we kinda do, and so we can feel the emotion in the song and can relate to it. It's a love song but a very non-obvious love song. Sheer brilliance.

It was the first dance at our wedding and I sent a pleading messagenger to the TFC page a few weeks before their gig at the Trades Club in 2015 asking if they would play it as it was 3 days before our 10th Wedding Anniversary. Play it they indeed did - and maybe it was just a coincidence - but the fact they did made a brilliant night perfect and I admit we were both in tears when they started playing it.

Never been to Scotland but I've swum in that lake so many times that it feels like my own memory.

As well as being absolutely spellbinding I just love the time signature changes from mostly 5/4 to 3/4 and 4/4. It's amazing!

One of their best by far, only heard them play it live once but it gave me shivers ... a perfect, short, melodic masterpiece. Possibly my favourite, never tire of listening to it ... the song that has everything.

We had it played at our wedding as we walked back down the aisle. Such an amazing song.

I played the piano on this song. The band invited me down to Liverpool Parr Street studio to add keyboards to 3 new songs for the compilation album. It's a really cool studio and in those major label days you could spend a week in a plush residential studio (Coldplay were recording their second album in the other room) to work on only three songs. So work generally stopped around 8.30pm and merged into party mode. Gerry plated fine cuts every night on the deck through the ginormous reference monitors. Digital Love by Daft Punk was enjoyed. A lot!

There is something about the combo of lyrics and melody that creates a real emotional resonance. It's not not necessarily a specific lyric that does it for me, and it's not like it's an uber sad song or anything but it gives me a lump in my throat for reasons unknown.

Hey, did I say ... I was staying with anold bouyfriend and his two friends came over one evening. One friend was arriving from another country and another was arriving after work - Tomtom.

I won't say who, but somebody had blagged a listen of the 2 new tracks recorded for the A Shortcut To album. After food, over beers and wine much was enthusiastically discussed (and smoked!) around the table - bad Tomtom! Great memory.

Last year was Tom's 10th anniversary and hearing these songs remind me of trekking along to the HMV in London to see them with Tom around that time.

Beautiful song through and through. I love how it sounds so confident yet at the same time asks were/are you waiting for me?

It is a pure love song. Back in time with you, moving forward with you, wherever you want to go I'm with you. It's classic and beautiful songwriting from Norman as always.

I'm an old cynic but it's really just the perfect "love song" - forgive the cliched term. That line sun, beating down, on your back is just so evocative. It just takes you to that place - sun, love, freedom. You can actually FEEL the sun on your back listening to it. In these times, who doesn't want someone to be there for you?

Hey, did I say, I don't mind if you want to go home

Take me there, no you don't, have to travel alone

Through the night, cross the sea, going back in time

Hey, did I say, that I smiled when I first heard your name

Fell in love, and I still, feel the same way now, far

Through the night, watch the light, fall away from you

To the lake, where you learned how to swim with the sun

Beating down, on your back, in the morning I'll come

Sun, beating down, on your back, in the morning I'll come

Norman playing solo at Cafe Mono, Oslo, 2012. Just listen to how pure and effortless his voice is.

A spine tingling version from the Barrowland Creation Years shows, highlighting the harmonies with Gerry that are mentioned above by Ruthie.

Search for Everything Flows Trust Me on Spotify for a playlist of all songs, or CLICK HERE
Posted by everythingflows at 09:35