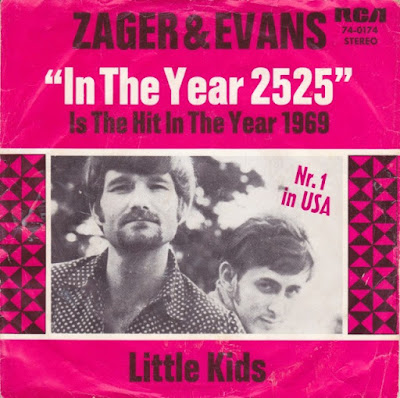 
In The Year 2525 is a futuristic psychedelic garage pop song released by the American band/duo Zager and Evans. Written by Rick Evans back in 1964, the song was originally released on a small regional label in 1968, before being rereleased and hitting number 1 in the summer of 1969, both in American and the UK.

I first heard it when it was played in the Scottish independent film Small Faces and I fell for it instantly. The production is incredible, the delivery is immediate and powerful.

Talk about taking the listener on a journey; thoughts are pre-programmed into pills, machines take over resulting in parts of the body losing their purpose, kids conceived in test tubes ... talk about being ahead of its time!


Everything you think, do or say
Is in the pill you took today

This is an incredible song. It is pop in the fact that it is instantly memorable, it is exceptionally clever, the power and delivery is sensational, the production is perfect and the fact that it is so out there, so futuristic and it got to number 1 - it's pretty mind blowing.

Trust Me
1. Something On Your Mind by Karen Dalton
1A. Crimson and Clover by Tommy James and the Shondells
2. I Am, I Said  by Neil Diamond
3. Where's The Playground Susie?   by Glen Campbell
4. If You Could Read My Mind by Gordon Lighfoot
5. Gimme Some Truth by John Lennon
6. Gone With The Wind Is My Love by Rita and the Tiaras