Gerry Cinnamon to play Hampden in 2020 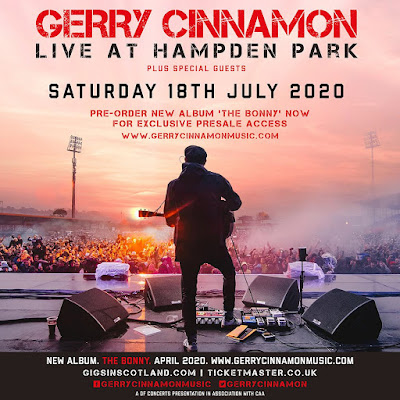 The story, the fairytale, the dream, keeps developing, the bonny burns brighter - more people fall under the spell, far away lands, wild scenes and so we arrive at the latest chapter....

Gerry Cinnamon has announced a HUGE home town show at Hampden Park in Glasgow for Saturday 18th July 2020. Tickets are on sale this Friday, 15th November.

This announcement continues the crazy meteoric rise of Cinnamon. My money was on Gerry headlining a night at TRNSMT 2020 - but his popularity has grown to the extent that he needs his own festival stadium sized show!

In a vision in the back o my eye 🔥 pic.twitter.com/8fCJFEdEme
— GERRY CINNAMON (@GerryCinnamon) November 12, 2019


And if you follow Gerry online (see video above) it isn't hard to discover why he is playing Hampden. Cinnamon is winning over arenas with his songs and personality. And his fans are playing their part, creating unparallelled atmospheres at his shows.

Sometimes it is hard to catch your breath and remember that Gerry is still unsigned - he releases everything himself. And in a media obsessed world (Gerry avoids it)- social media allows him to connect with the people who matter - the fans. And social media has allowed good old fashioned word-of-mouth to spread; from Glasgow, across Scotland, to England, Ireland, Wales, Europe, Australia, New Zealand ...

This is a trailblazing journey that Cinnamon is taking us on into uncharted, previously unimagined territory - an unsigned artist playing a stadium show?!

I would bet my mortgage on Hampden selling out in a day or less. And then ... a second night?!

I hope Gerry has been keeping a diary the last few years, in a way he has - just check his posts and tweets.

Hampden Park will be an absolute celebration and people will travel from all over to be there.

Good luck in the hunt for tickets.