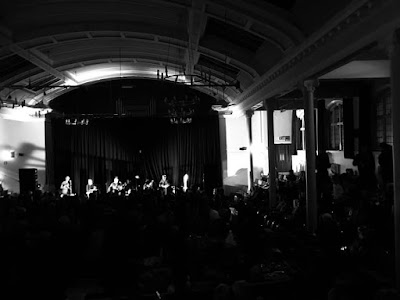 Yesterday was the very first Great Western multi-venue festival in the West End of Glasgow. Music fans had the chance of buying a ticket for a specific venue or a multi-venue ticket.

With The Pastels curating an excellent bill in Maryhill Community Central Hall including Lightships, Sacred Paws and Molly Nilssen - I quickly settled on the idea of staying in the one place. My friend Lorna started out at 3pm and hopped around to see Malcolm Middleton in the stunning Mackintosh Church, also checking out a psych band she couldn't remember the name of in the Hug and Pint and some spoken word in The Doublet before my friend Joe and I joined her at 6.30pm ahead of Lightships. Lorna even gamely hopped off to check !!! at the QMU and made it back for The Pastels.

Maryhill Community Central Hall is a superb venue and I hope the promoters 432 presents consider using it more throughout the year - seats on 3 sides and plenty of space to stand. The smaller room 2 was also excellent.

In Gerry's pre-show interview with The Scotsman he said - for me it's just a case of crossing the line and running about the pitch for a few minutes and going back off and being ready for the next season. That's the way I see it.

On the evidence of last night, Gerry is a midfield maestro like Paul Scholes - capable of turning up and turning it on. With a little training he will be on Champions League form next season.

Two Lines opened the show, Gerry's guitar collided beautifully with Dave McGowan's and we were off. Lightships line-up was Gerry, Dave, Noel O'Donnell (drums), Tom Crossley (flute) and Bob Kildea (bass). It seemed to go on for a glorious ten minutes.

We had two new songs which bodes well for the next season. The first one was, dare I say it, very Fanclub with a lyrics about choosing to walk from the airport. The whole set was beautiful, but I think the band grew stronger as they went on, Gerry would nod when he was ready to end a song, but the outro instrumentals were stretched out a couple of times as the band locked in a groove around circular riffs. Sunlight To The Dawn was a sublime end to the first Lightships show in many years. 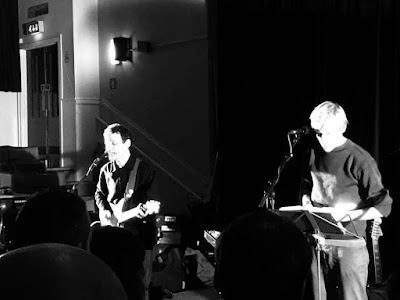 We chose to catch up with a lot of people we knew after Lightships rather than head to the second room. There was a brilliant community atmosphere - apt for the venue.

Sacred Paws were an absolute delight. It's been a good number of years since I last saw them. I think that was quite an early show. The core two-piece of Rachel Aggs (guitar and vocals) and Eilidh Rodgers (drums and vocals) were backed up with an additional guitar and bass at times, but I couldn't take my eyes of Rachel and Eilidh. Their energy and enthusiasm had large sections of a packed crowd dancing away and I caught my friend Alan dancing his heart out up the back section of the seats - so did Rachel and she acknowledged him.

Before we knew it Sacred Paws had drawn us down from standing at the back of the side section of seats to the front for a little boogie. Rachel jumped down from the stage to join in with a crowd to our left. Sacred Paws were on absolute fire and it was one of those beautiful moments when the band knew it and the crowd knew it. I will definitely be going to see them next time they play Glasgow. 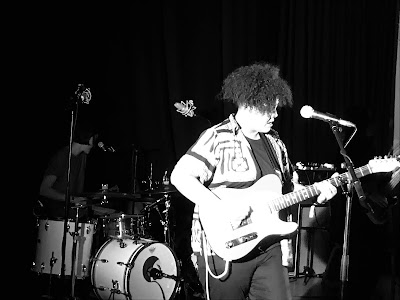 I've got a couple of Molly Nilsson's albums and I was looking forward to seeing her in Room 2. She was singing to a backing track, but that didn't stop her from being captivating - her red hair was striking and her silhouette was multiplied by the lights on to the back wall. I did only stay for a couple of songs as Lorna made it back from !!! and my sister managed to finish work a little early to get up in time for The Pastels, so we went to get a drink and a space.

I highlighted my love and appreciation for The Pastels in a recent blog. There was a lot of love in the Community Halls last night. The band were predominantly a 6-piece for the night, joined towards the end of the set by a 7th member to play (tubular) bells. Slow Summits was released 6-years ago and it made up most of the set last night. The 6 or 7-piece band sounded sublime, Stephen and Katrina seemed to take it in turns with lead vocals, at other times they were both involved.

Baby Honey was as outstanding as ever with Stephen coaxing excellent sounds from his guitar and the band ended with a surprise (at least for me) outing for their cover of Different Drum to huge delight all around me.

Stephen highlighted that The Great Western should become an annual event. If so, I hope The Pastels get to curate Maryhill Community Halls every year. 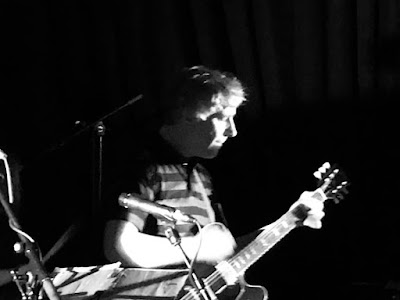