Last night I got the first gig of the year under my belt at King Tut's Wah Wah Hut. The reason for my early January outing was to catch two artists that I have blogged about and enjoyed over the last year or so - KVASIR and Wuh Oh. They were joined by Ultra's and Stillhound to make up a 4 band bill - offering exceptional value for money - if meaning a late night finish.

There was quite a smattering of bands and media in attendance to catch some of the buzziest acts in Scotland; Jim Gellatly, Vic Galloway, Saint PHNX, Miaoux Miaoux, Bad Mannequins and Crash Club to name a few.

KVASIR was certainly someone who drew a crowd, curiosity drawing people to the mysterious producer who plays wearing a fencing mask that has been souped up and electrified to look a little Daft Punk. I described his EP as the most sublime music being created in Scotland at present, it gathered excellent reviews and airplay and many are predicting big things for him in 2017 - even bigger after catching him last night! 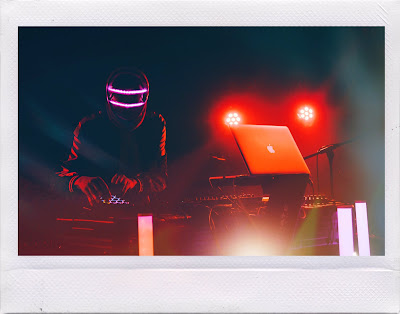 KVASIR in action at King Tut's
Picture by @brisbanecameron

KVASIR didn't waste any time in showing why - taking to the stage shortly after 8.40pm (his choice to go on first so he was in complete control of the sound) and literally lighting up King Tut's with a 25-minute set of pure electro pop perfection; the previously released EP and a couple of new songs.

I woke up humming the infectious melody to Lyon. I always take that as a good sign if I can remember a hook or a melody.

With his own light show and a huge flight case with a bank of equipment to run up Tut's electricty bill, KVASIR looked and sounded the part. I would really like to see him in a club environment - get this guy to the Sub Club!

KVASIR wasn't only conjuring up all kinds of beautiful sounds by his overworked fingertips on various gadgets, he was also singing live from behind his mask. It was clear to see that a mic was fitted into his mask and although his face was shielded to protect his identity you could just see enough through the mask to see him singing. To do that and everything else shows real talent. It was a sublime set.


Ultras were up next - great band name (not so easy to find on Social Media), although after checking a couple of songs in advance, I have to be honest and say that they were not for me. I did catch their last couple of songs and plenty of people enjoyed their set with one person next to me commenting that they sounded like early Biffy.

Stillhound got people dancing and I mean really dancing. It was fantastic to see young kids (and a couple who looked in their 60s) throwing themselves about with a sense of freedom. Stillhound used to be Discopolis, a band who I blogged about and caught live a couple of times in 2011.

They had something then and they have something now. All of their songs seem to have a beautiful flowing undercurrent, allowing the band to playfully come up with guitar and synth riffs and bass grooves. The trio also have a fantastic range of vocals among them and they combine all of the aforementioned in a kind of dreamy, clubby vibe. The band released an album in November 2016 that I will definitely go back to check out. Judging by the people dancing and singing a-long, many already have the album. Check it out below.


Wuh Oh (aka Peter Ferguson) was headlining and demonstrated exceptional skills with samples by switching, cutting, mixing, looping and playing piano and synths over the top of them - adding and dropping beats as he went. His exceptional Stay Tuned song is one I described as the sound of summer on ecstasy, sample heavy, uplifting pure pop, sounding like a lost cut from The Avalanches Since I Left You in a previous blog. He has loads more besides, isn't afraid to experiment and certainly isn't afraid to show he is having a good time on stage and that translated to the audience who joined in by dancing and some looked on in amazement at the sounds he created - jazzy and houses piano, funky beats, heavy bass.

Wuh Oh showed all kinds of skills and an eclectic taste. With long lanky hair and over sized jumper he just got completely lost in the music and took a large part of the audience with him. I really look forward to watching this artist develop over the coming year. 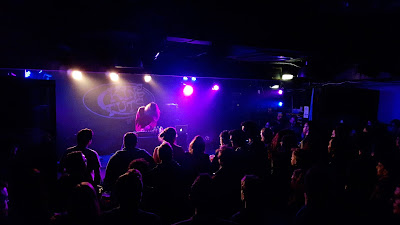