Every so often I ask one of my friends to write a guest blog if they are particularly passionate about a band, album, song or show.

Last night my friend Ian Smith went to King Tut’s Wah Wah Hut to see Teleman. Ian waxed so lyrically about them earlier on today that I asked him to write a guest blog....and here it is. 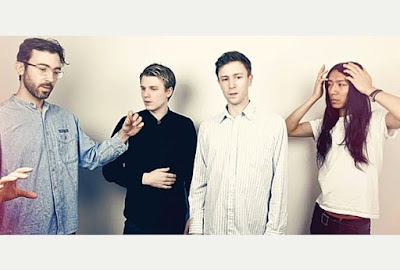 Every now and then a band stops you dead in your tracks and delivers a performance that makes you not only question what you originally expected of them but of live music as a medium in its entirety. So it was last night at King Tuts Wah Wah Hut, wherein Teleman delivered a performance so driven, so structured and so utterly mind boggling in its command of song structure and set architecture that it leaves you wondering how any other artists could even dream of entering a similar ball park.Formed in 2012 Teleman a London 4 piece, consisting of brothers Thomas and Johnny Sanders (vocals, guitar) and (keyboards) respectively, Pete Cattermoul (bass) and Hiro Amamiya (drums), have garnered steady critical acclaim, regulars on the Radio 6 play list, they have drawn comparisons with Depeche Mode, OMD and our very own Belle and Sebastian (thanks mainly to Johnny’s fragile vocals and literary writings. “Glasgow has some lovely Buildings but this song is called “English Architecture” “ he announced before delivering another stomping journey through 1970’s krautrock.
The evening began in the unassuming manner I originally expected, little stage chat, simple melodies, fuzzy yet precise guitar work all under pinned by the relentless progression of Hiro’s drumming. The audience swayed and applauded politely, new songs were gradually introduced - their new album is released on Friday and was on sale at the Merch Stand. 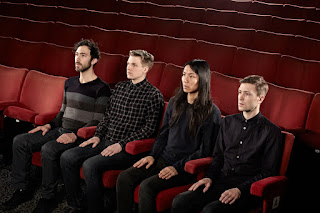 Usually when a band announces a new song in a set you can feel the rumbles of discontent wave through the audience, however after appreciating that the new Teleman were a whole different proposition, anticipation grew with every announcement.
The old songs were greeted with enthusiasm and had been beefed up to allow for their new found love of the guitar as a dominant force in the music, the whole set began to feel like a carefully crafted attempt to waive bye to the old perky Teleman and introduce a new beast, all strobe lights, looping riffs and thumping bass lines. When the main set finished, I looked exhausted, from all the dancing, to my friend Stephen “I thought they might be good” he said “but thats a whole different thing!” They returned to an ecstatic crowd and blasted straight into their latest single Dusseldorf imagine Stuart Murdoch duet-ing with Sparks Put On Put On Your Favourite Song he sings before unleashing a guitar riff that Franz Ferdinand would kill to have written. The set finished with 8 epic minutes of loops, feedback and pounding melody - suddenly it felt like 1990, I could have been in a Glasgow Warehouse at 3am, such was the infectious desire to shake loose and lose yourself in the music.