I really enjoyed Record Store Day 2016 in Glasgow. I visited Love Music and Monorail; bought some records, caught some live music, met some friends and also had a great family day out with my wife and 2 daughters. The sunshine even appeared in the afternoon, perfect for a few beers outside Mono.

Zoe and I caught the 1pm train into Glasgow and headed straight to Love Music to look for the Ette album Homemade Lemonade. Not due until July, Olive Grove Records released 10 copies to Love Music for Record Store Day.

The added incentive was that Zoe is on the cover - Ette is the solo project by my sister Carla who is in TeenCanteen.

Zoe and I were filmed in Love Music and you can see us at 40-seconds in, I’m also back in at 2 minutes 20 seconds.


Love Music had wisely decided to put live bands on in The Vale pub, mere yards from the store. While this took some of the buzz away from the shop, it meant that those purely interested in shopping had space (sometimes) to move. The store was busy and the half a dozen staff that were on looked tired but happy.

Space is at a premium in Love Music and putting the bands on in The Vale meant that people could get a drink and catch bands like Man of Moon and hotly tipped artist Be Charlotte alongside DJ’s from Podcart and Scottish Fiction.

We hot footed it over to Monorail and immediately bumped into friends Ben, Matt, Alison, Anissa and young 15-month old Martha sitting outside. Zoe and I attempted to go record shopping, but as it was mobbed we settled for a beer (me) and some chocolate and water (Zoe) and went outside for a natter.

Monorail and Mono Cafe Bar make a real effort to include youngsters and they had face painting and arts and crafts for the kids. Zoe got a fairy tattoo on her arm and I got a RSD16 tattoo!

My wife Lynn and youngest Rosie joined us and I finally got into the record store and bought releases by The Charlatans - Trouble Understanding (Norman Cook remix), Primal Scream - Mantra For A State of Mind - a cover of S-Express with Jason Pierce on guitar and a beautiful 7-inch by Glasgow band Spinning Coin - Albany. (blog coming soon).

I bumped into Greg from Machines In Heaven who will be dropping their new album in May. They’ve already released this gem 20xx and Greg was talking passionately about the album and the process behind the way they recorded it. Expect a blog and interview in the future.

Emma Pollock started a live set at 4pm, playing a beautiful old guitar. I was right down the front with Zoe and I couldn’t help think about how positive it was that Zoe (4) was able to watch Emma playing live at such close proximity and at such a young age. I swapped with Lynn halfway through the set and went outside with Rosie, but was able to bring her in to take this cracking picture. 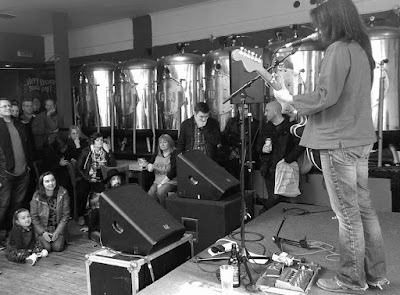 It was a top day - records, music, family, friends, beer, sunshine and Glasgow. I need to make sure I have another day like this soon! 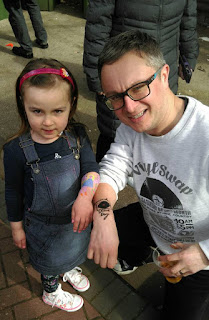