COVER OF THE MONTH #8 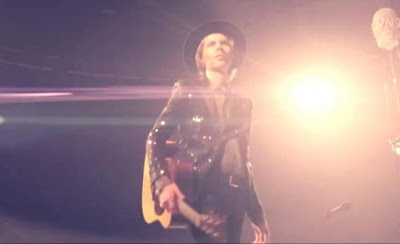 Beck does Bowie, boy does Beck do Bowie. Beck does Bowie with a 157 piece orchestra. Beck conducts them throughout, spinning on stage with his acoustic guitar, a finger wag here, a gesture with his arms there.

Listen with your headphones on when you get to the video below.

The start is incredible as Beck wanders around conducting the orchestra and generating noises that switch from your left ear to your right (microphones were suspended above). This goes on for an intoxicating 3-minutes before Beck and practically everyone burst into life with the classic Sound and Vision riff.

There is brilliant bit where everything stops leaving Beck strumming his acoustic guitar backed only by handclaps and the choir. It then builds up to a collage of noise before Beck returns the song to something that wouldn't sound out of place on his Morning Phase album. Beck then takes things on a funky cinematic trip for the duration of the song during which he really stamps his mark on the song, it absolutely soars, it is brilliant to watch and to listen.

Waiting, for the gift of sound and vision

It is 9-minutes of magic, made possible by the Lincoln Car Company who told Beck he could do something with no limitations or restrictions.

Beck shows that like Bowie, he has the gift of sound and vision. Astounding.

1. You've Lost That Lovin' Feelin'
2. Going Back To My Roots
3. Nirvana play The Vaselines
4. Slip Inside This House
5. Top 10 covers by Teenage Fanclub
6. Only Love Can Break Your Heart
7. Time For Livin'
Posted by everythingflows at 09:31

This is absolutely fantastic. It makes me want to rush out and do something amazing.