Here are 16 things that I am looking forward to relating to Scottish music in 2016. Starting with albums/shows/activity from some of my favourite bands.

It was number 1 in my 15 things for 2015 blog and it didn't happen, but it will definitely happen in 2016...won't it? I'm pretty sure it will and Norman Blake has tweeted that the album is ready and Gerry Love has said it should be ready for the summer in a recent interview on Finlay MacDonald's Alternative Folk Show (13th December). A Fanclub album in time for summer would be perfect.

I was lucky enough to hear Norman's songs from the album when I gave him a lift home from Edinburgh back in May - classic Fanclub. I look forward to the album and some long awaited live shows. 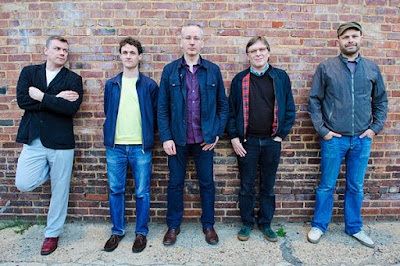 2. Belle and Sebastian celebrate 20-years together
Belle and Sebastian have announced (and SOLD OUT) 2 very special shows at the Royal Albert Hall in London next June to celebrate the 20th anniversary of the band. The first night will see the band play their celebrated debut Tigermilk and the second will be about all things If You're Feeling Sinister.

Surely the band are going to do something special in Glasgow or Scotland? Keep an eye on their Social Media pages if you are a fan of the band. 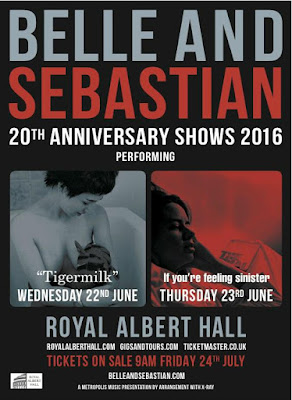 3. BMX Bandits 30th anniversary
BMX Bandits formed in the summer of 1985 and released their debut single in the summer of 1986, so they are stretching their 30th anniversary celebrations over 2-years. They eased in gently in 2015 with a handful of headline shows, an appearance at Wickerman and a great support slot with The Charlatans. The band are in fine form - expect much more in 2016 - potentially activity relating to their back catalogue but also possibly some new material.

The BMX Bandits will play a special 30th anniversary show at the CCA on 14th May. See you there. 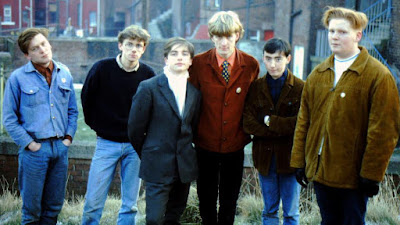 4. Primal Scream - album and shows
Speaking of Pledge Music, Primal Scream have decided to go down that route for Chaosmosis - their new album due for release in March. They follow that up with 4 'intimate' shows including the Aberdeen Ballroom and the ABC in Glasgow.

The fire still burns in Bobby Gillespie and I look forward to seeing what he and his band have been working on. 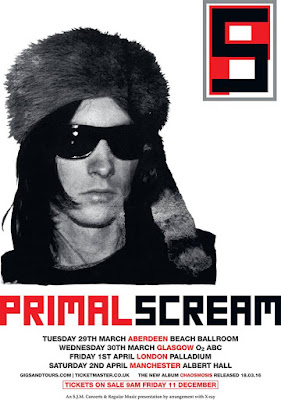 5. The Pastels archive project
I recently re-read the magnificent My Magpie Eyes Are Hungry For The Prize book on Creation Records and it caused me to delve into the labels extensive back catalogue. Despite being a fan of The Pastels for over 20-years, I hadn't really dug into their very early releases, I guess because 20-years ago you couldn't really get a hold of them, now you can get a hold of pretty much anything on YouTube.

Somethings's Going On by The Pastels was one of the very first releases on Creation Records, away back in the day, closely followed by Million Tears which I totally fell in love with on first listen and kicked myself for not discovering it before!

Million Tears is guitar pop perfection, flowing superbly from the very start with a great upbeat instrumental intro before bursting into a short verse and then chorus.


Stephen has confirmed that The Pastels will be working on an 'archive project' throughout 2016 and will be collecting tapes from various sources over the weeks and months to come. Expect some shows later in the year, it would be amazing to hear Million Tears and some of the really early stuff live.

6. The SAY Award
The SAY Award goes from strength to strength. I thought the move to the ABC in 2015 was a great choice (as much as I love the Barras). The longlist highlighted how eclectic and strong the Scottish music scene, the shortlist emphasised it with many surprised by the likes of the Twilight Sad and Mogwai not making the cut.

The SAY Award introduced many (myself included) to the talent of Kathryn Joseph and Happy Meals. I look forward to seeing what the long and short lists bring up next year.

7. T in the Park and the Stone Roses
I've got tickets to see the Roses in Manchester and I may well venture up to Strathallan Castle to catch the Roses on Scottish soil. The Roses stir incredible passion from within their Scottish fans and they will be bang on form following their 4 shows in Manchester.

2016 is set to be a crucial year for T in the Park after a deluge of complaints from last summer relating to the new site - the size, set-up, facilities, stewarding and access all came in for heavy criticism.

CEO Geoff Ellis issued a very honest and transparent apology and statement regarding the problems that many fans faced last year. Ellis confirmed there has been a full assessment and a strategy is in place to ensure that things will be up to scratch in 2016.

T in the Park is very important to Scotland, we need a strong flagship festival and the thirst for live music within the country demands it. I look forward to seeing what acts are announced over the months to come. 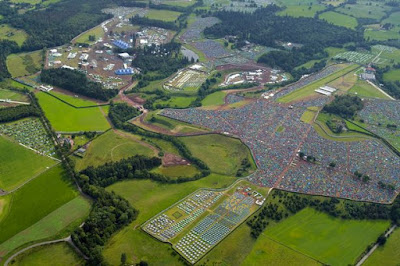 A large percentage of the line-up for 2016 has already been announced.....and it may well mean that I make the journey north! Add in a stunning setting at Bogbain Farm in Inverness, craft beer gin, cider, whisky, rum and prosecco bars and a ticket price of £59 and it looks like a winner.

Kloe and White have been signed to major labels and could be in line for a breakthrough in 2016, C Duncan was nominated for the Mercury Prize, Best Girl Athlete released one of my albums of 2015, Roman Nose are incredible live, Adam Holmes can produce moments of beauty and Colonel Mustard and the Dijon 5 are going from strength to strength.

9. Wickerman
I always have an absolute ball at the Wickerman Festival, the location, atmosphere and eclectic line-up always ensure a good weekend. No acts have been confirmed for the 2016 festival as yet and sources indicate that Synergy Concerts will not be booking for this years festival. So there will be changes, I look forward to hearing the first acts being announced in the near future.

I'd really like to take our 2 kids to Wickerman 2016. It will make for a completely different weekend but Wickerman has that kind of family friendly vibe. If not 2016, then they will definitely be ready in 2017. 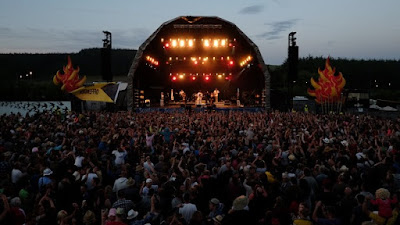 10. Bands and artists developing
See my blog on 16 bands/artists that will be developing through 2016 HERE.

11. Celtic Connections
A quiet January? We don't do quiet in Glasgow, there is always something going on, always some excuse to get out for a drink, a catch-up and some music, art or entertainment.

Celtic Connections is set to deliver another incredible few weeks in Glasgow with Scottish alternative acts including;

As well as the John Grant show mentioned above, They Might Be Giants family matinee show and an evening for Bert Jansch catch the eye.

Skint? Well get yourself along to the BBC or some of the free workshops on offer. Also check out the amazing late night festival club to test your endurance or the new Late Night Sessions at the Drygate Brewery compered by Finlay Napier.

12. King Tut's New Year Revolution
Now in the hands of young Chris Beltran, KTNYR showcases some of the many up and coming acts from around Scotland in one of my favourite places in the world.

I am especially looking forward to the night on Saturday 23rd January as I'll be DJ-ing between the bands Enemies of the State, November Lights, Lemonhaze and the Freelance Liars. The Van T's are special late night guests in the bar after the fun upstairs is over.

November Lights feature in my blog on 16 artists to watch develop in 2016. 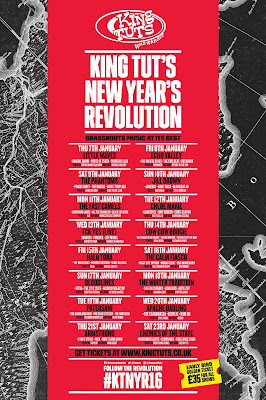 13. Scottish labels
Tiny labels like Hits The Fan Records (Kathryn Joseph and JR Green) and Night School Records (Happy Meals) (Molly Nilsson) are releasing some incredible music. I've also been really impressed with the cassette label Fuzzkill Records who have been prolific with their output over the last year or so featuring bands like my faves Catholic Action.

Phew - that is not to mention Bloc Music, Song by Toad Records, and Chemikal Underground and Mogwai's Rock Action Records!

As I said in my previous blog, the Scottish music scene is in good health and a rich vein of form and a lot of that goes down to the taste and energy of those running the labels mentioned above.

14. Barraloadasoul
One of the best nights I had in 2015 was getting dressed up and heading into the Barrowland Ballroom to dance on a talcum powdered floor to some incredible music with family and friends. It was like a scene out of a film with people dressed to impress and busting some serious moves on the dancefloor. The moment one of the DJ's dropped Jackie Wilson (Your Love Keeps Lifting Me) Higher and Higher was like being in my dream disco, hand in the air, smiles on faces, good times.

The third annual Barraloadasoul takes place on Saturday 21st May from 2pm-midnight. 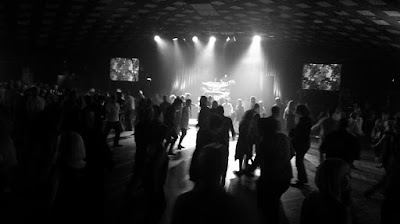 There is an element of luck from just scanning the internet and stumbling across something. Fortunately I know 2 people who have been in bands in the past and will be in bands in the future, but who also create incredible music in the comfort of their own homes.

Listen to Brittle by Broken By Rock, it is like a fragile New Order


I am brittle, in many, many ways
A broken heart, I cannot stay
A sign this song, for you I pray
My broken heart

Check it on SOUNDCLOUD

Then there is Stephen Solo who has recorded an album on his iPhone. The results are amazing. Check out Crying Because - a raw gem, absolutely beautiful. Stephen also made a brilliant homemade video on his iPhone as well.


16. Record Store Day
I totally get the arguments that Record Store Day is a bit corporate these days and I understand the frustration from artists and fans about the people who buy a rarity and stick it up on ebay immediately. However it is still fun and a celebration of record shops across the world. Taking a trip to Monorail in Glasgow is a semi-regular occurrence for me, but going with my friend Dave, drinking beer and catching some bands while we are there is not something that happens very often unfortunately. So for that reason alone I am looking forward to Record Store Day.

Saturday 16th April is the date for your diary. 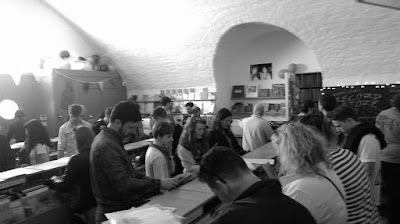