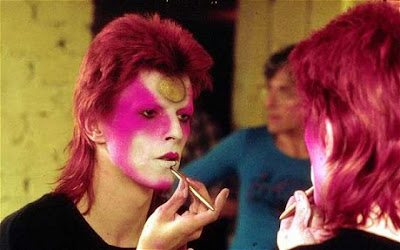 Like many, I have spent today listening to songs from the truly exceptional back catalogue of David Bowie following his sad passing after a battle against cancer.

Bowie was unique; he was a pop star to some, he seemed like an alien to many others when he was beamed into their TV's on Top of the Pops to perform Starman, he was a chameleon, he was inspirational and he was an incredible artist.


Heartfelt tributes have been pouring in all day for this wonderful creative, eclectic and eccentric singer, songwriter and performer. Bowie inspired many (Morrissey, Marc Almond, Brett Anderson and probably most of the 80's new wave romantics) but he quite simply could not be imitated.

Bowie always ahead of the game, he didn't just stick to a formula, he challenged himself and others and he was a leader; bold and imaginative, bursting with energy and creativity.

I thought I would take 20-minutes out to write a short blog about my 10 favourite Bowie songs.

1. Sound and Vision
I don't know what it is about this song that grabbed me on first listen and has never let me go. I've played it loads of times when I have DJ'd in the past; the opening beats into a glorious guitar riff and instrumental that flows beautifully eventually leading to synths and eventually a deep sigh and finally   the lyrics. Brilliant. Bowie is definitely someone who wondered about sound and vision.

2. Let's Dance
I used to manage the Glasgow band Sonny Marvello and their singer Stephen is a Bowie nut. The band covered this, I think for a night at Pinup Nights in the Flying Duck, and it led me to checking out a lot of Bowie's 80's material. A couple of years ago I was at the Wickerman Festival when Nile Rodgers played this song, that he co-produced, and again it led me to listen to it over and over again for weeks afterwards. It is so clever; from the Beatles-y Twist and Shout opening to the funky bass and synth, the incredible vocals that encourage the listener/muse to put on your red shoes and dance the blues and then the glorious....


If you say run, I'll run with you
If you say hide, we'll hide
Because my love for you
Would break my heart in two
If you should fall into my arms
Tremble like a flower


3. Modern Love
Another 80's Bowie song that Sonny Marvello covered. It is a real pop gem that the band learned for a set before singer Stephen's wedding and they played it at a party the night before. I always think of an incredible 2-days with some great friends, culminating in a beautiful wedding when I hear this song.

5. Under Pressure
OK it's not all Bowie, but this may well have been the first Bowie song I head when I was a kid. That and his Dancing In The Streets duet with Mick Jagger! I still think it is a beautiful song and the performance is sensational with Bowie bringing out the best in Freddie Mercury and the song inspiring Bowie to reach fantastic heights.


This is our last dance


6. Starman
Loads of musicians from a certain era cite this as the moment they decided to form a band. Bowie beaming into their homes looking out of this world; was he a boy, a girl or an alien? Who cared, he was different and he was cool. The moment he puts his arm around Mick Ronson is brilliant - he knows he is f**king good. He packs everything into 3 minutes and 30 seconds.


7. Queen Bitch
Another song I have played quite a lot when DJ-ing. That opening acoustic riff suddenly develops into something monstrous, quite punk rock and Bowie is in full flight sounding like he is loving it.


8. Changes
One of the first Bowie songs I really fell for in my late teens. The delivery of ch-ch-ch-changes and the line time may change me, but I can't trace time seemed to be written for me. Yet again, Bowie pens a song that flows superbly.


9. Ziggy Stardust
Bowie had many looks, guises and disguises throughout his career, Ziggy Stardust was arguably his best. The vision, ambition and delivery of the look, the songs and the album were pure pop art. Nothing like this had been done before. No-one could do it afterwards.

10. Five Years
From the legendary Ziggy Stardust album, it was yet another cover version that caused me to fall for this song and go back and dig out my second hand vinyl copy. This time it was an acoustic performance by singer Kevin Harper at a charity show I put on at Maggie's Centre in Glasgow. Knowing the diagnosis' some people in the room were dealing with, the song took on a new meaning to me and I got quite emotional.