Last night I had the pleasure of dj-ing at the legendary King Tut's Wah Wah Hut, before and in between 4 bands playing as part of the venues New Year Revolution series of shows.

The four bands in question were Freelance Liars, Lemonhaze, November Lights and Enemies of the State. All made it an enjoyable night.

Freelance Liars were on sharp, a few minutes ahead of their allocated 8.45pm stage time, determined to make the most of their time on the Tut's stage. Their first two songs were my favourites in their set, duelling electric guitars sounding superb.

Lemonhaze were up next and their frontman Gerry Doran delivered an energetic and entertaining performance. Despite claiming to be 'pissed' his vocals were bang on throughout, ranging in style and tone and capable of soaring. His energy transferred to the crowd who responded to his calls to join in and the band may well have won a few new fans.

I featured November Lights on my blog back in November (funnily enough) following the release of their debut single Bring You Home and I was really looking forward to seeing them live for the first time. The young five-piece brought/drew the largest crowd of the night.

Young frontman James Hopkins was celebrating his 19th birthday and the crowd rendition of Happy Birthday seemed to give him an extra spring in his step. Hopkins had the confidence to switch between mics to allow him to play acoustic guitar and keyboards at various points in the set, also bringing on a guest female vocalist for a tender duet. The band are planning an EP for around May - keep an eye on them. 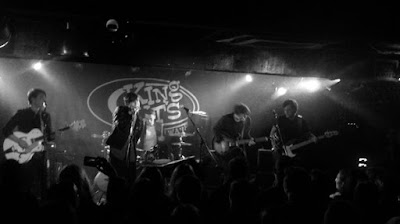 Enemies of the State bounded on to the stage dressed in black and launched into the opening intro before their singer joined them. I was quite intrigued as he looked different to the rest of the band.

After their first song he promptly announced that this was their last ever show.....but, they were continuing with a new band name Oceans (surely there must have been a band called that before? great name), had written loads of new songs and they wanted to be the biggest band in the world and Glasgow wasn't big enough for them.  One step at a time though - they didn't pull the biggest audience at Tut's last night.

Being honest, they aren't to my taste, but credit where its due, they were going for it and the singer spent a considerable amount of time away from the stage to get the crowd going, encouraging their loyal fans who had been chanting E O T S at the start to get a new chant for their new band.

King Tut's New Year Revolution delivered 16-shows and 96 acts - showcasing some of the up and coming bands that Scotland has to offer. Well done to Chris Beltran who curated and booked the shows and he let me know that he already has loads of ideas for their Summer Nights shows.

Any aspiring bands/artists should send Chris some notes/a bio and soundcloud links to chris.beltran@dfconcerts.co.uk