A lot of my recent blog posts have focused on anniversaries of classic albums, subsequent shows and also on bands that I have been following for years. I make no apologies for that - I'm fortunate to have discovered a raft of amazing bands and artists as a teenager and in my early 20's that are still around. However I do enjoy discovering new music.

So I thought I would aim to write about nine new bands through the month of November.

I got in touch with a few people to ask for some recommendations of young bands that I should check out and I have thoroughly enjoyed listening to loads of fantastic music.

As it is 1st November, I'll start with the appropriately named November Lights.

I've listened to a dozen new Scottish bands over the last couple of weeks - this band leapt out at me. I must have listened to their debut single Bring You Home at least 20 times.


The infectious, uplifting guitar riff is played with real feeling, vocals with a sense of urgency and emotion, a tight rhythm section and the song opens by asking key questions.

Things drop down for a gentle first chorus, the vocals are almost whispered, there is a pause and the band explode into life as the chorus is repeated with force.

Call on your brothers, fathers, your mothers
Let there be lovers, love one another
I'll hold your hand
And fight 'til I bring you home
Will you hold

The 1st verse is repeated before another chorus that is expanded to contain extra lines. I love a band that writes good choruses and November Lights hammer this one home another couple of times before finishing the song in 3 minutes and 30 seconds - another good sign, far too many bands push their songs beyond 4-minutes for no real reason.

I caught up with the James Hopkins, the bands singer and songwriter to find out a little more about the band. Check out the interview below. 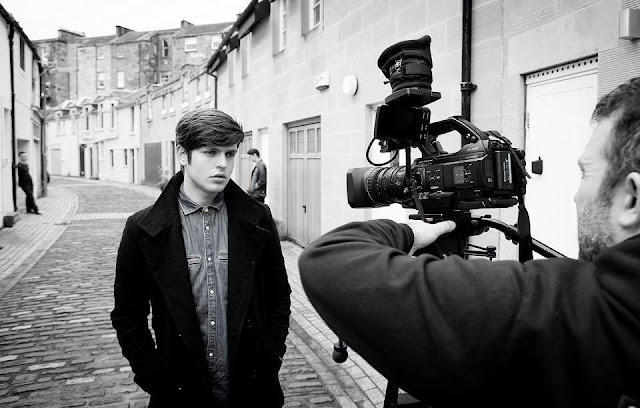 1. How and when did the band get together? And how quickly did your sound come together?

We played our first show in November of last year (hence the name)...so we consider that to be the time we formed. Finding our sound is arguably still in progress but we all individually and collectively know what we are striving for. The vision between us is pretty clear.

The band are spread from north Ayrshire to East Kilbride but we class Glasgow as our base. It'll always be home as it's where we all met and played our first shows together.

3. What are your influences?

I feel one of the best things about us as a band is that our music tastes vary so much that we get some weird and unplanned results. As a writer it's great to bring songs to the band because we all bring so many different elements to the table and can change the shape of a song from what was first planned. As a writer that's exciting to me. In terms of influences, our music tastes stretch from the pop of One Republic and Michael Jackson to more rock and electronic influences. There isn't too much that we don't take influence from. Melody is probably the most important thing to us.


4. ‘Bring You Home’ is excellent, was that one of the first songs you wrote as a band?

We are starting to write more and more together but the single was written by myself and then brought to the band...but I always say that it's a group effort because the song is no where near finished until everyone in the band gets their hands on it. Bring you home came together pretty quickly. We're happy with how it worked out.


5. How pleased have you been by the reaction to your debut video/single?

It's been great...Bring You Home is the first song that anyone has heard from us so to hear that people are loving it and singing along at shows is a great sign. It's positive and we hope that continues with the work we're putting in. The band just focusses on getting better and hopefully our fans will hear that with every release and show.

We have a few shows lined up in amongst some recording. We play, Edinburgh, Dunfermline, the Clyde 1 Strathclyde fireworks event and a special show in Kilwinning for 200 fans. That will be  a fun way to round off the year.

Playing to as many people as possible in different places. We start the year with our first show in Dundee then have a big Glasgow show that we can't yet disclose. In general it's a massive year for us with lots of stuff planned. We are working on our first  E.P due out in spring time and we'll be playing shows around that release. Then it's on to festival season.

8. Are any other young Scottish bands catching your attention?

We are huge fans of Prides, Fatherson and the LaFontaines, not to mention we played a show with the later two.  That was amazing and we learned a lot. It's amazing to see so many bands coming out of Scotland, the music scene here is one of the best. We're proud to be a part of it.
Posted by everythingflows at 12:22