BMX Bandits at The Hug and Pint 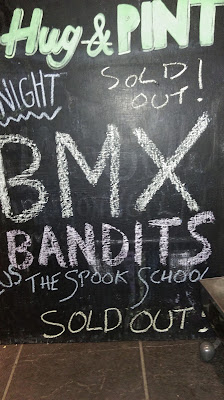 A summer show at the Wickerman Festival was a delight and intimate shows in Dundee and Glasgow this week allowed the band to explore their back catalogue to the delight of some of their die hard fans who got tickets.

Duglas T Stewart always has his ear to the ground and he chose Edinburgh band The Spook School as the support for the Bandits last night. I had only seen the band once before - when they played TeenCanteen's The Girl Effect back in May, they caught my attention with a storming version of Icona Pop's I Love It.

I'd checked them out online and was looking forward to seeing them in action. The Spook School didn't disappoint. The front trio of Nye Todd, Anna Cory and Adam Todd look like they are in their teens, they jumped about, made their guitars sound glorious and their singy shouty vocals were catchy and infectious. Everybody Needs To Be In Love was an early highlight.

The band were punky, poppy and their ear for a chorus won them many new fans. I ended up buying their new album (the bands second) Try To Be Hopeful and a t-shirt. I'll write a separate blog on the band in the near future. 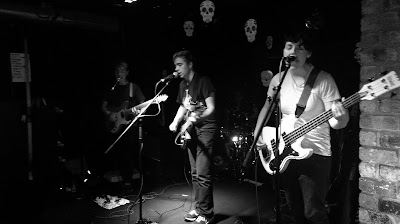 Duglas T Stewart and his BMX Bandits took to the stage and proceeded to delight the packed basement of The Hug and Pint with a set that took in their debut single, songs from their latest album and songs that Duglas is currently working on with Stuart Kidd from Dr Cosmos Tape Lab.

Little Hands was a brilliant opener, the Bandits at their best - romantic, melodic, catchy and fun. A cover of Daniel Johnston's Do You Really Love Me was introduced by Duglas telling the crowd that Daniel is probably his favourite songwriter. The vocals were shared with Chloe Phubo and the crowd really got going.

Serious Drugs was poignant and beautiful, while And It's You, one of my favourite songs from BMX Bandits last album (In Space), was just glorious. It is a gem of a song, stunning melody and has a great natural feel.

The Bandits always guarantee romance, yet they also guarantee a sense of fun and humour. The Road To Loved Is Paved With Banana Skins contained both in bags.

Way of the Wolf and It's In Her Eyes were the newies performed. The latter was my favourite out of those and I look forward to hearing them both on record. 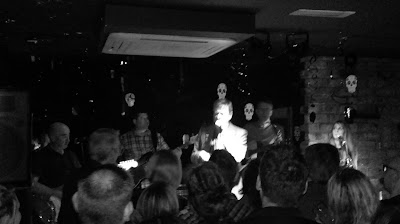 It was a bit of a standout for me last night, beautifully sung by Duglas.

The closing section was simply sublime;

Your Class was another highlight, introduced by Duglas as being written in response to hearing Stephen Stills Love The One You're With when he heard it back in the 80's whilst on tour.

It is one of my favourite songs by BMX Bandits, just hopelessly romantic and romantically hopeful.
The delivery was exceptional - Duglas was on top form all night - vocally and also between songs.

Disco Girl and E102 were great fun before an encore of old favourite Kylie's Got A Crush On Us and then Fireworks from In Space.

This was a pretty special encore for me and my sister as I used to play Kylie's Got A Crush On Us to her when I was 17/18 and Carla was a young 7/8! And Carla wrote Fireworks for Duglas and he has been exceptionally supportive of her songwriting and TeenCanteen.

This was a fantastic show and I look forward to Duglas and the BMX Bandits plans for the remainder of their 30th anniversary celebrations. Duglas is a singer-songwriter to be cherished and his band seem to relish playing his songs.

Next up for BMX Bandits is a support slot with one of my other favourite bands - The Charlatans - in Dundee in December. 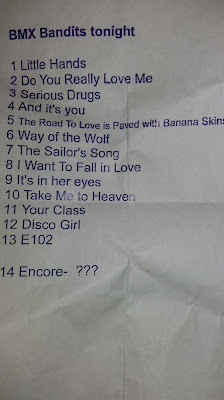