Introducing - Colonel Mustard and the Dijon 5 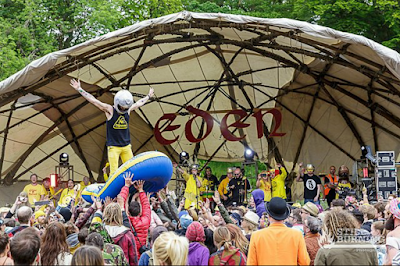 Mixing with the fans Colonel Mustard style, crowdsurfing in an inflatable boat!

For whatever reason, I didn't see the band - although everyone I met over the course of the weekend that had seen them was raving about them.

I've still not caught them live, although the bands growing reputation led to them winning the Best Live Act at the Scottish Alternative Music Awards this year. 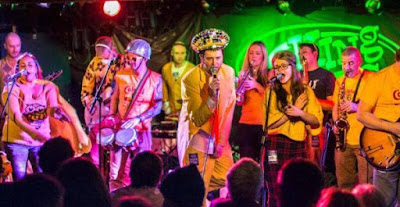 The video for their latest single These Are Not The Drugs That You Are Looking For (that I have unfortunately only just discovered) highlights why they were deserved winners of that award. Filmed at the Kelburn Garden Party, they have an absolute blast on stage and get the audience jumping, dancing, singing and generally having the time of their life. Watch the video HERE.

The single is like a melting pot of the Beta Band, the Polyphonic Spree, ska, funk, soul, a dash of Screamadelica and more than a dab of euphoria. Stretching out to over 8-minutes, this is ambitious, fun, eclectic and uplifting. 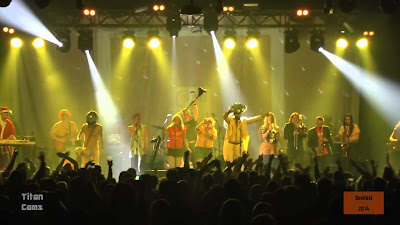 The band have fun on stage and off but, despite their apparent lighthearted take on life, they are not afraid to comment on political issues.

Colonel Mustard and the Dijon 5 refer to their fans as the yellow movement. It is a movement that is growing and the band are set to cap a memorable year with a huge all-dayer at St Lukes in the East End on Saturday 19th December. I imagine a few more people will be joining the yellow movement in 2016 and I intend to be one of them.

Labels: beta band, Colonel Mustard and the Dijon 5, eden festival, festival, glasgow music scene, new music, these are not the drugs you are looking for, wickerman

if you are free on 19th December I shall personally pay for 2 tickets in your name, thus you can join the Yellow Movement in 2015.