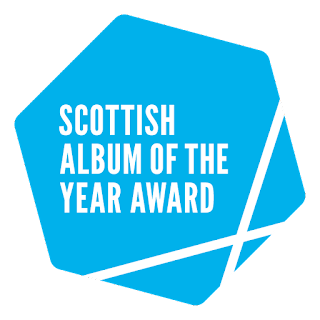 The Scottish Album of the Year Award (the SAY Award) has been a welcome addition to the Scottish music and arts scene since its inception; highlighting the quality and diversity that our nations artists create year on year and provoking debate about what albums should make the shortlist and of course; who should win.

The ten albums on the shortlist are noted below; the fact that the likes of King Creoste with his critically acclaimed From Scotland With Love, Withered Hand with his brilliant New Gods and The Twilight Sad with their most acclaimed album of their career, haven't made the shortlist has already created heated debate amongst Scottish music fans.

Little known acts like Happy Meals are on there - I have really fallen for their album since wondering who the hell they were when they popped up on the long list.

Let's see who is on the shortlist - in no particular order;

Last years winners Young Fathers are shortlisted again with Dead. They won with a mini-album/mixtape last year that created a heated debate regardless of the quality. The band followed that up by winning the Mercury Music Prize and have been gathering incredible critical acclaim and a growing fanbase.

The band are fiercely independent, prolific and are developing a reputation for fierce live performances. Dead has already won the Mercury - can they do the double? They may well be back on the shortlist again in 2016 with their latest album White Men Are Black Men Too.

The Amazing Snakeheads Amphetamine Ballads sent them careering around the globe causing havoc with their energy and passion. They imploded in February this year to the dismay of many.

Will their sole release win them the SAY Award? It's a menacing album mixing all kinds of stuff - The Doors crossed with punk, rock n roll and jazz at times - as evidenced on Flatlining below.

I caught them at the Wickerman Festival last summer and they were sensational live. They wouldn't be my own personal choice but would be popular with many.

Kathryn Joseph is someone I can see winning the award. Appearing from nowhere with a beautiful Vic Galloway session and causing some Scottish bloggers to melt with her Bones You Have Thrown At Me And Blood I Have Spilled album. I have yet to hear a bad word about this album or her live performances.

Listen to the gorgeous The Bird to get an idea of the beautiful sounds and imagery she creates.

Happy Meals have already won a new fan in me. Their name caught y attention when the SAY Award longlist was announced and I was transfixed by the gorgeous and eclectic sounds they create on their Apero album. It is just so gorgeously different - think Stereolab crossed with Kraftwerk in the year 2025.

I really hope to see them live in the near future.

Belle and Sebastian have made the shortlist with Girls In Peacetime Want To Dance. I reviewed the album on release HERE

It is a brave album; dealing with personal illness, incorporating disco influences, yet remaining distinctly Belles. As per the review, I think there are some incredible songs on the album. Stuart Murdoch is an exceptional songwriter and I certainly wouldn't be surprised if they won.

Paulo Nutini is on the shortlist with Caustic Love. Paulo is a huge artist with worldwide appeal and this album has won him new fans, including those who perhaps poured scorn on him and his music in the past.

I haven't heard the full album however a couple of my best friends have been won over by it. Performances and songs like Iron Sky below highlight why he may become the most mainstream artist to win the SAY Award to date.

Honeyblood are a band that have worked exceptionally hard over the last year to promote their eponymous album that was released on Fat Cat, a label that has taken Scottish acts to their hearts over the years.

Honeyblood (the band and album) is very old school indie guitar music - so no surprise that I quite like it. Humour, warm guitars and good hooks are evident throughout. That said, I'd be surprised if they win and have done well to get to the shortlist.

Paws are another act on the Fat Cat Records label and their album Youth Culture Forever has understandably found favour in America where they have toured extensively. The slacker/grunge guitar sound can be exceptionally catchy at times but it isn't without depth and there is so much more to them as evidenced on their near 12-minute epic War Cry which has echoes of Nirvana, quiet verses then truly exploding into life.


SLAM are veterans of the Glasgow music scene, so in that sense it is good to see them on the shortlist with their Reverse Proceed album. It must be around 10-years since I have seen or heard SLAM in action, however I am reliably informed that they are still leading their field.

Judge for yourself with this continuous mix of the album;


Mogwai's Rave Tapes didn't make the shortlist but Rock Action label mates Errors have made it with Lease Of Life. Pardon the pun but they seem to have had a new lease of life - I was surprised when I caught them live in Glasgow Green for the Commonwealth Games last summer. They put on an incredible show to match their sonic soundscapes.

Errors have a real chance of winning for me. They seem to be progressing as a band, unafraid to explore and experiment, willing to bring friends (Cecilia Stamp on guest vocals) into their inner circle and gathering some fantastic reviews.

Check Through The Knowledge Of Those Who Observe Us for evidence of the expansive, melodic and experimental sound that Errors are capable of creating. The songs were created on the Isle of Jura and this epic 13-minute closer is a song with plenty of dreamy space, not in a rush, building gloriously.


So there you go - my top 3 in no particular order would be Happy Meals, Errors and Kathryn Joseph. My outsiders would be Honeyblood and Paws. But technically each artist has a 10/1 chance of winning!

The SAY award ceremony is at the ABC in Glasgow on the evening of 17th June.