COVER VERSION OF THE MONTH #1

You've Lost That Lovin' Feelin' by Gladys Knight and the Pips 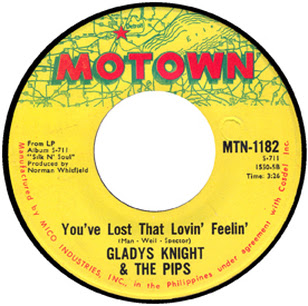 Phil Spector, Barry Man and Cynthia Weil are the genius songwriters behind the incredible song You've Lost That Lovin' Feelin', a song that has been a hit across the world for a number of artists.

The original was recorded in 1964 and released by The Righteous Brothers back in 1965 with Spector working his wall of sound magic on production and Bill Medley's spine tingling lead vocals caused hearts to melt.

The original ran to almost 4-minutes in length - far from the norm back in 1964 when 3-minutes or less was the rule of thumb. Spector refused to cut it though and had fake labels made with the track length showing as 3:05 rather than 3:45.

The song allegedly had more TV and radio plays in the 20th Century in the USA than any other song. Top Gun in the 1980's may well have been the first time I heard it.

Elvis, The Beach Boys, Cilla Black and Roberta Flack are among the many to have covered this true classic - you really can't go wrong with this song - unless you absolutely murder it.

I decided to blog about this song ahead of Motown legend Gladys Knight and the Pips playing in Glasgow later this month. I doubt they will play it but I really do hope so. It may well be my favourite cover version of all time.

Why is it my favourite?

Well for starters Gladys Knight and the Pips just rip it up and fly through it - the funky bass intro, that classic Motown beat, Gladys sounding sensational, the Pips backing vocals are sublime and just listen to that bridge into the chorus.


You're trying hard not to show it
But baby, oh baby I know it

The chorus the soars before Gladys leads into the second verse, the strings are glorious and Gladys is in absolutely sensational form over that 4/4 beat. 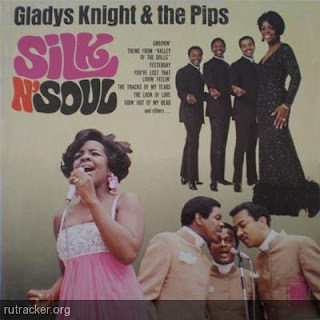 the album Gladys and the Pips recorded this cover for

Bill Medley takes his time in the The Righteous Brothers version, meanwhile Gladys has the words pouring out of her in true Motown style.

Bill Medley sounds sad and mournful, Gladys Knight sounds angry, upset and ready to fight for her love as she almost screams at the end;


Bring back that loving' feelin'

You've Lost That Lovin' Feelin' is a sensational song and this is a stunning performance of it - just so full of soulful emotion.

This may well result in a new feature - Cover Version of the Month.

For the time being - this is my favourite cover. Click on the link below to enjoy.